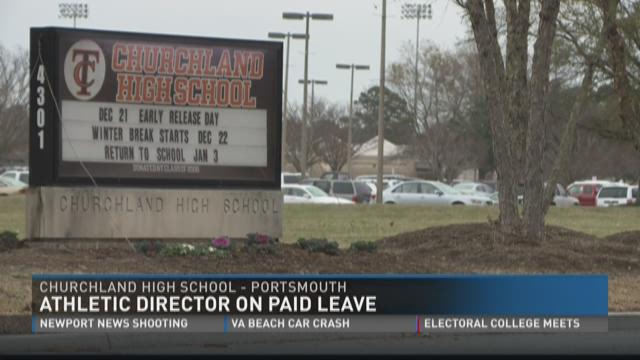 The school division has confirmed David Moss is on leave. Moss is the school's athletic director.

Fifteen-year-old Zaniquia Kirby says the complaints stem from an incident in the girls' locker room. 13News Now got permission from Zaniquia's mother to speak with her on camera.

Zaniquia is on the junior varsity girls basketball team. She says she and four of her teammates and five or six junior varsity cheerleaders were in the locker room getting ready for a game against Norview High School last Thursday. She says some of the girls were not fully clothed when Mr. Moss suddenly opened the door.

"Coach Moss-- he opened up the door and he was telling us to get out of the restroom for the other players-- so the Norview players could come and get dressed," she said.

Zaniquia says she didn't actually see Mr. Moss walk into the locker room, and it's not clear if he saw any of the girls.

The next day, Moss was placed on paid leave.

"I was just confused because there's a whole other restroom that the girls can get dress in too, so there's no reason for him to open up that door," Zaniquia said.

Zaniqua says she and the other girls involved were called down to the front office today to talk about what happened.

"He (school administrator) was just asking me questions about-- write a statement about what happened or whatever, and then he asked me to like put an X where I was in the restroom and how many people were in there, and give him names of who was up in there," she said.

Portsmouth Public Schools would not confirm Zaniqua's story, citing a personnel matter. Moss will remain on leave until the complaints are fully investigated

Portsmouth Police are not investigating the matter. Moss has not been charged.