A shipyard employee suffered an electrical shock. Another worker interpreted that he had been 'shot' instead of shocked. 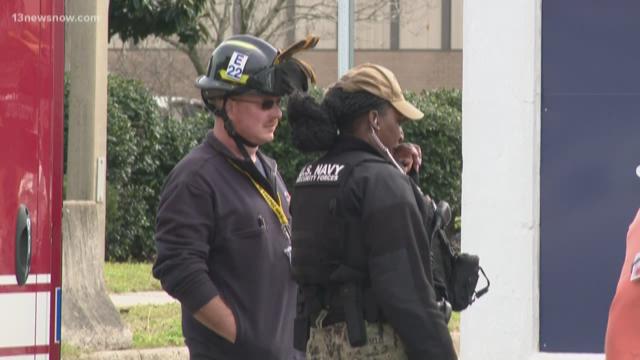 PORTSMOUTH, Va. — Authorities confirmed there was no actual threat of a shooter at Norfolk Naval Shipyard on Monday.

According to a Norfolk Naval Shipyard Public Affairs Officer Terri Davis, a miscommunication is what prompted the lockdown.

An employee working aboard the USS George H.W. Bush suffered an electrical shock and someone nearby interpreted that the employee had been "shot" instead of "shocked."

The shelter-in-place alarm sounded according to standard operating procedures for responding to a potential active shooter. All facilities at the shipyard commenced the lockdown at 11:23 a.m. on Monday. It lasted only two minutes.

An alert was posted to the shipyard's Facebook page with a message reading, "RUN, HIDE, FIGHT."

About 10 minutes after that post, another post was made saying the "all clear" was called and that the lockdown was lifted. Officials gave the all clear after it was confirmed that the report was based on miscommunication.

"Well, I'd rather it be safe than sorry," said shipyard contractor Chris Ellis. "There's a lot of stuff happening nowadays. It's best to be on top of things and not let it happen. I'm glad they did what they did."

The employee who was shocked was in stable condition but was transported to a medical facility for further evaluation.

More than 14,000 people work at the nation's oldest naval shipyard. It is Hampton Roads' fourth-largest employer. They primarily maintain and repair nuclear-powered submarines and aircraft carriers.

Because of the sensitive work that is performed there, and because of the high number of people who are employed there, officials have to take any threat seriously.

Fortunately, this one was a false alarm. But one need look no further back than to December 6 for the real thing. That's when an al Qaida-linked Saudi aviation trainee killed three sailors and wounded eight others at Naval Air Station Pensacola.

That same week, a disgruntled sailor fatally shot two people and wounded another person at Pearl Harbor Naval Shipyard before killing himself.

And back in September of 2013,  a gunman fatally shot 12 people and injured three others at the Washington Navy Yard.

Unfortunately, this is not the first time Norfolk Naval Shipyard has had a security situation as well. Over the last few years, there have been several instances of somebody writing bomb threats on bathroom stalls,  prompting facility lockdowns.

The Naval Criminal Investigative Service got involved, and last year offered a $2,500 reward for information.

As it so happens, every February, the Navy conducts annual anti-terrorism/ force protection exercises at its bases in the continental United States, called "Solid Curtain/Citadel Shield."

Davis confirms Monday's shipyard scare was not a part of that exercise.

RELATED: A decade of triumph and tragedy for Hampton Roads military community