The Lord Mayor Lee Mason of Portsmouth, England was present for a mural unveiling in Portsmouth, Virginia. 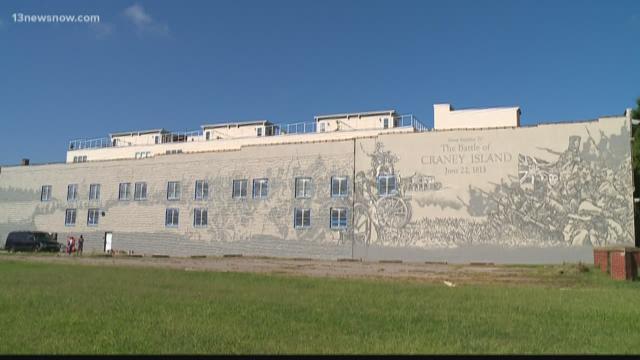 PORTSMOUTH, Va. (WVEC) — A new mural was unveiled on the Breeden Company’s Montgomery Square building in Portsmouth on Thursday.

The mural depicts the Battle of Craney Island, a scene from the War of 1812 that ended the 2nd conflict between the young United States and Great Britain. The scene shows British troops entering Portsmouth through Hoffler Creek.

A variation of this mural used to be on the Cedar Grove Cemetery wall at Effingham and North Streets. The wall collapsed during Hurricane Matthew in 2016, taking the iconic mural with it.

The artist of the mural, Sam Welty, is a Texas native known for his artistry in the Hampton Roads area. He has paintings at the Virginia Air & Space Center, the Virginia Zoo, and 7 murals in Portsmouth alone.

The Lord Mayor Lee Mason of Portsmouth, England was at the unveiling Thursday in the 700 block of High Street.