After a heated public hearing on Monday, Portsmouth City Council delayed the vote on committing to the plans for a new city hall and public safety building. 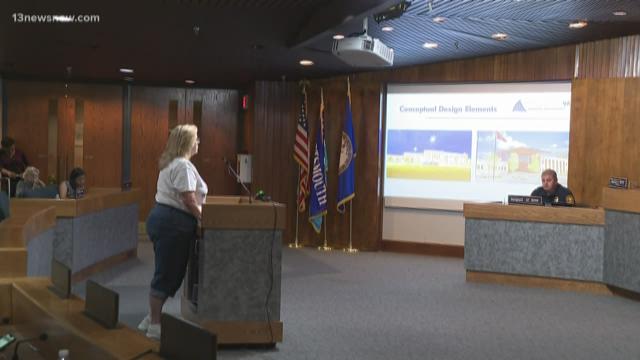 PORTSMOUTH, Va. — On Tuesday, Portsmouth City Council delayed the vote on committing to plans for a new city hall and public safety building without setting a date for another vote.

The vote concerns a deal with developer Armada Hoffler for detailed design plans for the project. If the city chooses to back out of the deal, it would owe the developer $475,000.

The delay comes after community members showed up and made their disagreement with the potential deal heard.

Monday night, dozens of community members showed up to make sure their voices were heard.

"The deal sucks and the citizens do not want it," another woman said.

Councilman Paul Battle, much like two weeks ago, stood firm against the idea.

"This is the worst thing that could ever be done to our city," he said. "We need to relax and enjoy the success that we've had as a city."

After hearing from the public, more members of council voiced concerns about the deal. The city's vice mayor and at least one other councilman were concerned with the deal.

Armada Hoffler's plan would move city hall and the public safety building two blocks from where the buildings currently sit while the current property would be turned into waterfront apartments.

There is still an ongoing lawsuit between the city and the sheriff after the city manager had the Portsmouth Civic Center Complex, including the jail, condemned.