The company said it's expanding its distribution area to include Hampton Roads and surrounding cities starting March 25, 2019. 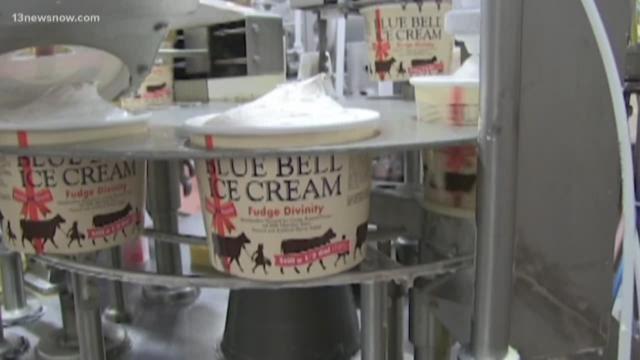 Blue Bell Creameries announced its ice cream will be back in Hampton Roads grocery freezers on March 25, 2019.

Elizabeth City and Outer Banks in North Carolina will also be on the distribution list.

“It has always been our goal to return to Hampton Roads,” said Jimmy Lawhorn, vice president of sales and marketing for Blue Bell. “We are also bringing our products back to Richmond and the surrounding cities. Currently, you can purchase Blue Bell in a small section of western Virginia. In 2019, we will expand our sales area to include the eastern portion of the state. We can’t thank our customers enough for their patience.”

Blue Bell built a 14,000-square-foot distribution facility in Suffolk which will open in April.

Ice cream fans can look for Blue Bell at Kroger, Publix, Walmart, Walgreens, military commissaries and many independent grocery stores. If customers cannot find Blue Bell in the ice cream section, be sure to check with the store personnel.

Blue Bell offers a complete line-up of products including 40 flavors of ice cream, Light and No Sugar Added selections, sherbet, and frozen snacks.

To find out more information about Blue Bell, CLICK HERE.