The fire was called in around 9:21 a.m. at the Tower 112 building in downtown Suffolk. No injuries have been reported at this time. 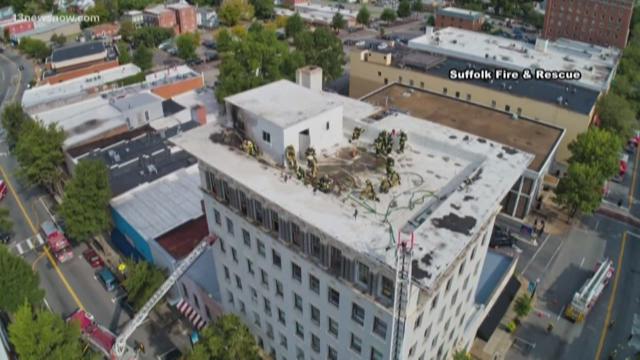 SUFFOLK, Va. — Suffolk Fire & Rescue crews are on scene of a high-rise fire in Downtown Suffolk on Wednesday morning.

Emergency Communications was called at 9:21 a.m. of the fire at the Tower 112 building at 112 W. Washington Street and the corner of North Main Street.

Officials said the fire was first reported as showing from the roof of the seven-story landmark building.

The building, built in 1916, formerly housed a bank, then transitioned into an office building. The Suffolk Fire Chief says it's salvageable.

Smoke conditions have been reported on several stories of the building as crews respond to each floor to ensure that everyone has evacuated.

Police redirected traffic as multiple streets, including North Main Street from the Godwin Courts Building to the corner of West Washington extending down West Washington Street to Saratoga Street closed as crews investigated the scene.

Those roadways have since been reopened. No injuries have been reported at this time.

“When I found out it was that building, I was kind of like ‘Oh crap,’ I know a lot of friends who have office spaces in that building. So, I immediately called them to make sure that they knew and a couple of them didn’t,” said Brinkley.

Crews closed the streets surrounding the former bank closed for several hours, which forced Brinkley and other business owners to wait outside before going into their businesses.

Michael Barakey, the Chief of Suffolk Fire & Rescue said more than 40 firefighters from Suffolk and Chesapeake worked to save the historic building.

“The roof will have to undergo a major renovation repair, but certainly, the businesses below the seventh floor, once the power is restored, they’ll be back open," said Barakey.

"Over the years of the history of the city, this remains a part of our history. We want it preserved for historical reasons, as well as because so many people depend upon this location for work and for their business.”

Brinkley was relieved to see the building still standing after the fire.

“There’s a lot of history in that building. If you look at the details in every window,  you don’t see a lot of that anymore.”