Residents claim city staff told them they ran out of sand. The city says while it did fall short, the area that was left out is still protected. 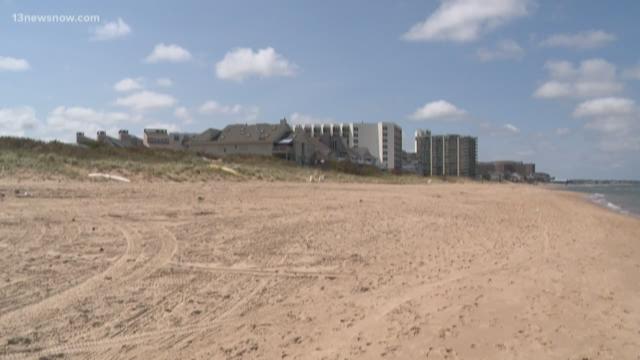 They told 13News Now they are “disappointed” that the sand did not reach their homes.

Hurricane Dorian was proof that the water can affect the beach on the Chesapeake Bay.

“High tide got into the dunes,” said Tim Peebles, who lives on Cape Henry Beach, which is East of the Lesner Bridge.

Some residents in the area said they were preparing for the extra sand to be placed before the storm, but it never came.

The Army Corps of Engineers said the operation was part of a dredging project that dug sand out of the Lynnhaven Inlet for navigation and boat travel safety.

“The contractor has to get to a certain required depth and they did achieve that,” said Project Manager Chris Tolson.

Virginia Beach City staff then arranged for the sand to replenish the beach from the Lesner Bridge to First Landing State Park.

“Our permit allows us to dredge the fully permitted depth,” said Dan Adams, Coastal Program manager for the city. “We wish [the replenishment] could have been a little bit further, but definitely as you go further East, the beach is wider the dune strip is wider, structures are set further back from the shoreline.”

Adams told 13News Now that the area on the other side of the Lesner Bridge, Ocean Park, will get a full replenishment some time next year. Cape Henry Shores Beach will get the same treatment in the years to come, Adams said.