The teacher says she was fired because she is white after backlash from her racial stereotypes lesson. 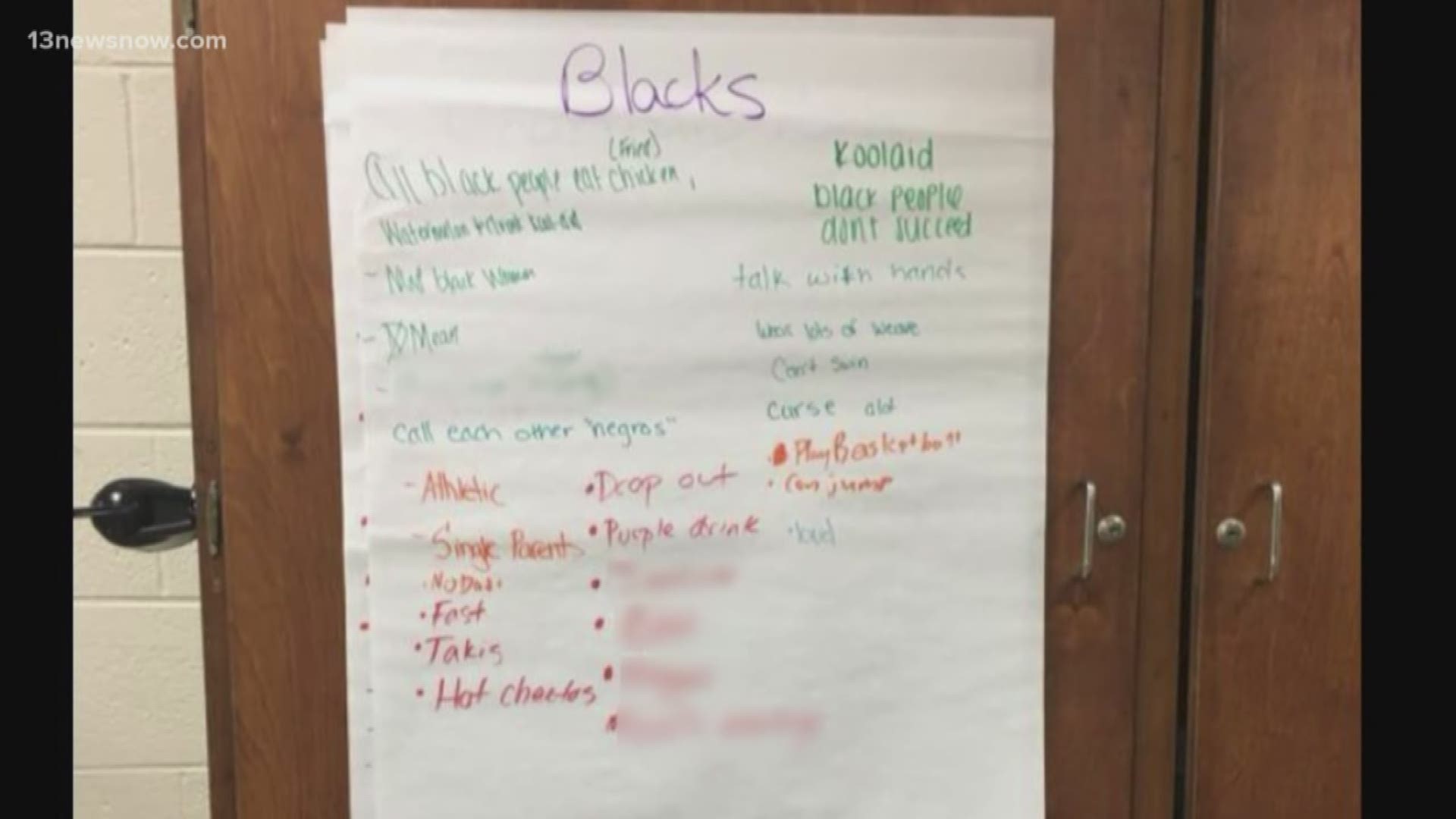 VIRGINIA BEACH, Va. — A former teacher is suing the Virginia Beach School Board, claiming the school division fired her because she is white after backlash from a lesson on racial stereotypes.

Deborah Smith, a former Kempsville High School teacher, is seeking $1.75 million in total damages. She claims another teacher, who is black, used the same lesson plan and didn't receive punishment.

In May of 2018, Smith tasked students in her 10th grade class to write down stereotypes and slurs about different groups, including black people, Asian people, Hispanic people, jocks and "courtyard kids."

The activity was designed as part of a class assignment meant to show the harm of stereotypes and biases. On the 'blacks' poster students wrote things like 'black people don't succeed' and 'single parents' among a variety of slurs.

A student posted a picture of the poster to social media leading to community backlash.

In the lawsuit, Smith says this backlash was out-of-context and people outside of the classroom didn't understand that the list was part of an exercise to show how racial stereotypes are wrong. Smith claims "none of the students who were present for the Stereotypes Lesson were offended by it" and each student "enjoyed and benefited from it."

However, Virginia Beach City Public Schools released a statement in May 2018 saying the list was unacceptable and, in fact, perpetuated racial stereotypes:

"We will not try to justify or defend the language or phrases seen on a poster created in one of our classrooms. The activity that led to this should not have happened. It is completely unacceptable that children were put in the position to generate a list of disparaging remarks used to characterize others."

The school division fired Smith before the 2018-2019 school year.

The lawsuit says "if [Deborah] Smith were black" the school division would not have fired her. It also claims the Virginia Beach School Board considers "appeasing Black individuals and the Black community more important than protecting the rights of White employees including, but not limited to, Smith."

Attached in the lawsuit documents is the 'Recommendation for Dismissal' letter from former Kempsville High School principal William Harris.

In the letter, Harris writes: "Unfortunately, this incident is not the first time that I have been concerned about your lack of judgment."

He writes that Smith spent $1,100 of school funds without proper approval, mishandled cash receipts for the Homecoming Bonfire and "wrongly complained directly to the varsity girls' basketball coach via e-mail about his allowing players to kneel during the national anthem."

The lawsuit was filed Tuesday in U.S. District Court.