Police said that officers picked up 80-year-old Ernest Broadnax in New York. He's facing charges for the murders of two women at the Oceanfront more than 45 years ago. 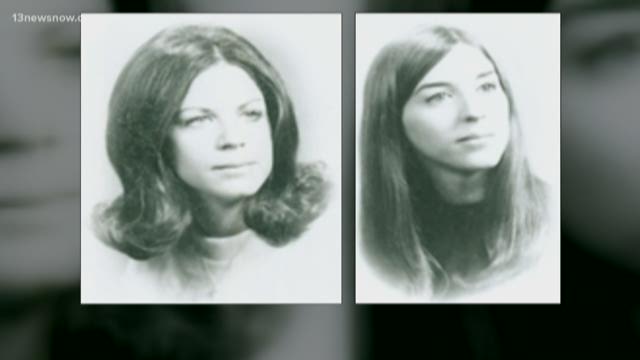 Almost 46 years ago the victims, Janice Pietropola and Lynn Seethaler, both 19 at the time, came to the Virginia Beach Oceanfront from Pittsburgh for summer vacation.

The 19-year-olds were staying at a cottage at 10th Street and Atlantic Avenue where they were found dead on June 30, 1973. The Medical Examiner's Office ruled the deaths as homicides.

According to police, the case went cold after the department was unable to identify a suspect following exhaustive measures.

The Cold Case Unit remained diligent and continued to follow up on leads that came in while seeking out advanced forensic technology to bring justice to the victims' families.

In fall 2018, cold case investigators, with the support of the Commonwealth's Attorney, began researching a strong lead they received. The investigators were able to identify 80-year-old Ernest Broadnax of St. Albans, New York as the suspect in the case.

Credit: Virginia Beach Police Department
Police said that officers picked up 80-year-old Ernest Broadnax in New York. He's facing charges for the murders of two women at the Oceanfront more than 45 years ago.

The New York Post said Broadnax has been living in Jamaica, Queens.

Broadnax was charged with two counts of second-degree murder and one count of rape. He is awaiting extradition to Virginia.