Mayor Dyer highlighted recent successes and provide a glimpse into the City’s future. 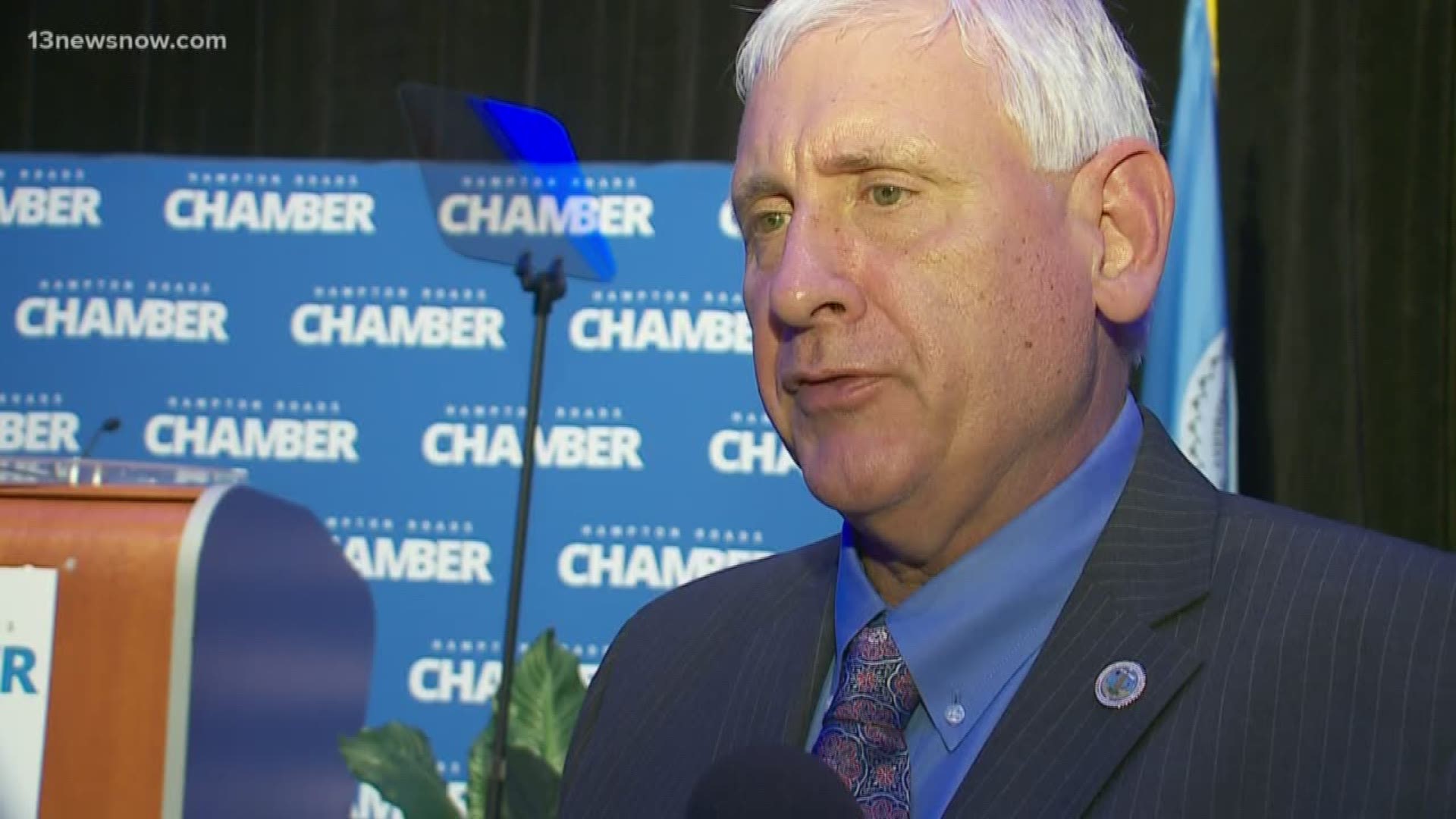 It was Bobby Dyer's first address. He started by saying he loves the city and is proud to be mayor. The event was hosted by the Hampton Roads Chamber at the Virginia Beach Convention Center from noon to 2 p.m.

Dyer’s first goal is to get all residents engaged and involved in the community. During the speech, Dyer asked people to pull out their cell phones and vote on some topics. One topic was, “what are the three most important issues the city needs to address.”

Bobby laid out the main issues in Virginia Beach. He said flood control, water quality, and maintenance of aging stormwater are critical issues in the city. He said stormwater projects will continue to be the main priority.

The city received a report to on flooding, called the Dewberry Report. Dyer said he plans to turn words into actions to preserve the area.

“We are going to start a commission on it, with education. We are going to work with other communities like Norfolk. We will have a seminar where we will get university resources," Dyer said.

During Dyer’s speech, he mentioned the Something in the Water festival. It’s Pharrell Williams vision taking place during college beach weekend April 26 to 28. Dyer said companies like Sony, Adidas, Verizon, and Timberland are heading to the area for that event. He told the audience those companies plan to spend around $15 million in the city.

“This is not only an opportunity. I’m hoping this is going to be a yearly thing. It’s really going to help change the perception that Virginia beach doesn’t welcome everyone but guess what, we do,” Dyer said.

Dyer also explained Virginia Beach continues to be the nations safest large city, and the crime rate is the lowest it’s been since the 1960s.

The mayor also touched on schools in the area. He said for the second year in a row, all Virginia Beach City Public Schools received full accreditation. The district also had an all-time high graduation rate and the lowest ever dropout rate.

Last year, several big companies came to Virginia Beach, two of them being Pottery Barn and Williams Sonoma. Dyer said not only are big box stores heading to the city, but small businesses are also too.

Thirteen local businesses received grants and leveraged more than $200 in capital investment and created more than 550 jobs for the city. Dyer said he wants every business small or large to be successful in Virginia Beach.

The Mayor said he wants people in the city to feel included, and know that this is everyone's city.

That's why Kevin Jamison moved to Virginia Beach to start his businesses, and get plugged into the community. "Prosperity Kitchen and Pantry" is one of his shops in the ViBe District.

I think Virginia Beach is a great place to come and do business at because it's still young in regards to the different kinds of businesses that exist here," said Jamison.

His shop is one of about 80 businesses in the ViBe District, which was established just four years ago.

Director Kate Pittman said the ViBe's mission and vision really fits what the mayor talked about, creating a space that people are proud of, and want to stay and invest in.

"We know that is a reason. People want opportunities. When there are small business opportunities, those young entrepreneurs are going to stay here in Virginia Beach and raise their families and grow their businesses here and that's an exciting potential for the whole city," said Pittman

"I think that what the city has done in regards to helping make this happen has been really big for not just the businesses that exist here, which are small locally owned businesses, but for the city as a whole," said Jamison.

The mayor said in the past two years, the grant program has helped ViBe businesses with $75,000 leveraging about $400,000 in capital investment.

The Hampton Roads Chamber is hosting the State of the City Series which connects the community and provides valuable insight on issues impacting businesses and the region.

These events have become the preferred forum for elected officials and mayors to communicate with their constituents and are often sold out events.