Kenick El made the comments on his Facebook page. He also posted comments about the transgender community. 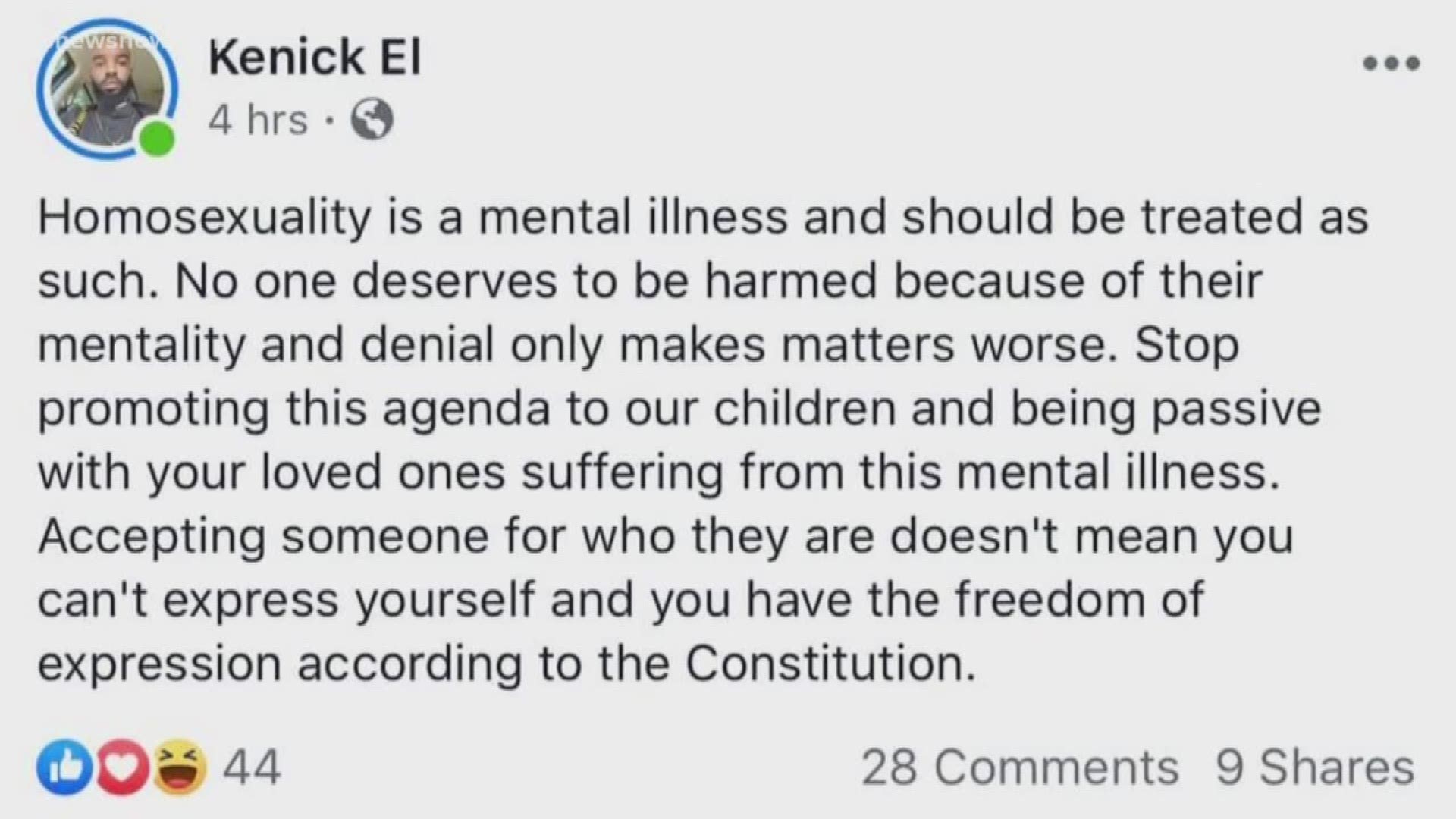 VIRGINIA BEACH, Va. — On the heels of the Virginia Beach Human Rights Commission recommending that city council members ask the state general assembly to ban gay conversion therapy, a member of the commission described homosexuality as an "abomination to the Human Race" and a "mental illness."

Kenick El posted the descriptions on his Facebook page. They were among comments he wrote after sharing a news story about a transgender woman being convicted for the sexual assault of a 10-year-old girl in a bathroom.

After people challenged what El wrote, his follow-up comments included statements such as:

During a phone interview with 13News Now, El said the posts are his own "personal views" and do not reflect the position of the Virginia Beach Human Rights Commission.

"I felt like it was very important for me just to express my views on my page in a very sincere, polite manner," he said. "I made it clear in the message, I'm not speaking on behalf of any organized group."

He said he felt compelled to speak out because he didn't agree with people "imposing" and "promoting sexual behavior" on others.

El said he "loves everyone" even though he may "disagree" with another person's sexual orientation.

"I don't think people trying to take posts from Facebook and make a public debacle out it is appropriate," El said. "I think we have a right to freedom of speech according to our constitution and freedom of expression."

He said he wanted to start a dialogue.

From its inception, the Virginia Beach Human Rights Commission had these duties, powers, and functions:

Brother Kenick El is speaking as an individual and does not speak on behalf of the Human Rights Commission (HRC). We are a commission, appointed by and serving at the pleasure of City Council. The HRC is a very diverse group of individuals who come together for the common good and equality for all. However, each commissioner has individual beliefs, and we do not always agree. I personally do not agree with the postings and other commissioners have contacted me and they do not agree as well, but rather support and value our fellow LGBT commissioners, family members, friends and supporters.

The Hampton Roads Pride board of directors shared a letter the group sent to the Virginia Beach City Council. The letter said, in part:

The Human Rights Commission (HRC) engage with members of the LGBT and allied communities in public discussion and in alignment with the work of the HRC to “work toward mutual understanding, respect of all citizens and advocacy of human rights for all people.”

You can read the full letter below.

Hampton Roads Business OutReach (HRBOR) stands with our partner LGBT organizations, Hampton Roads Pride and LGBT Life Center, in strongly rebuking Mr. El’s statements and calling for accountability and action from the VBHRC. No person should serve on a human rights commission who does not value the existence and validity of all people. Mr. El’s lack of respect and dignity towards gay and transgender people is counter to the mission of VBHRC.

The full statement is below: