The Virginia Beach Sheriff's Office said it was tightening up its security procedures for people entering the courthouse. 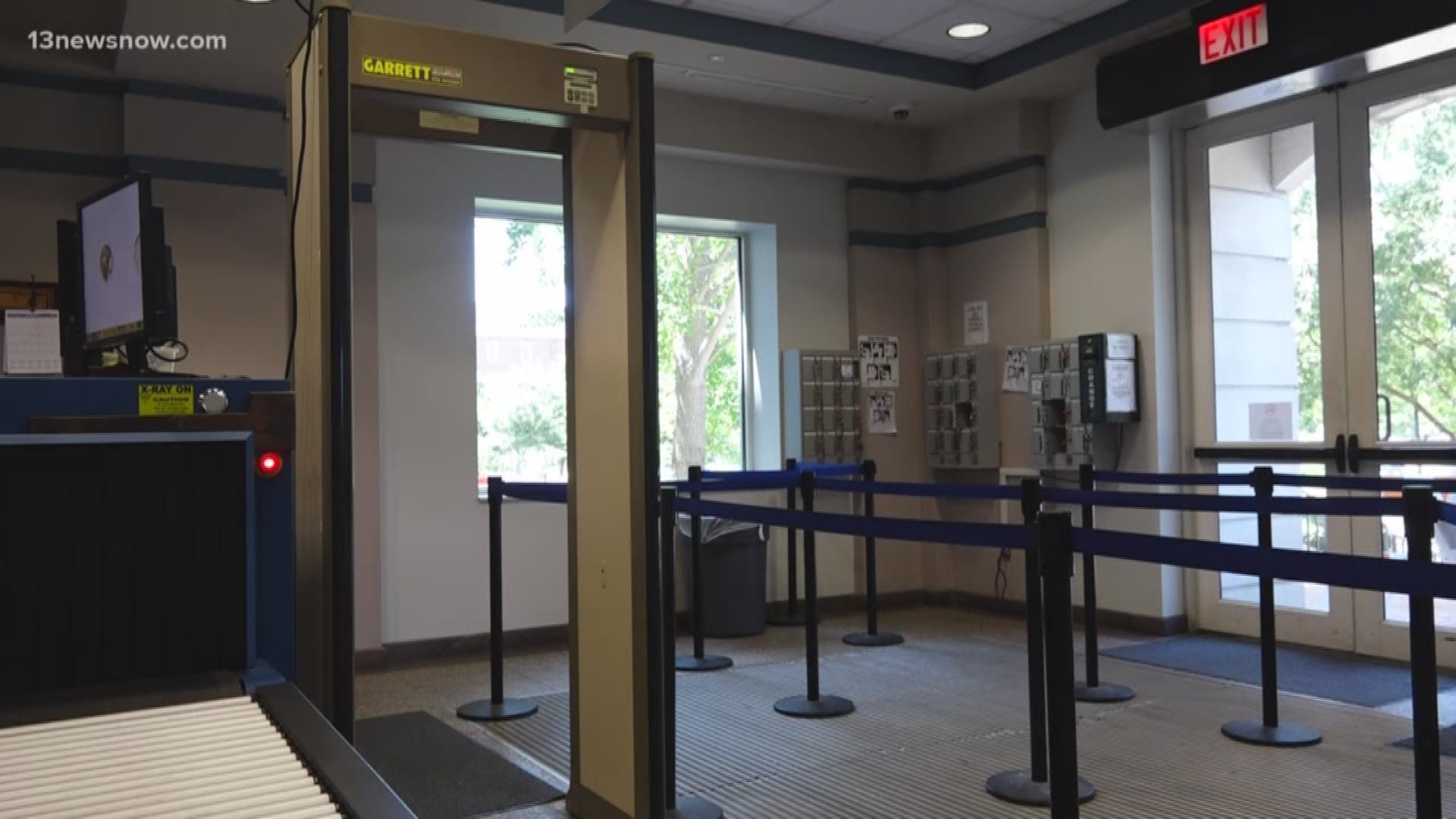 VIRGINIA BEACH, Va. — The general public is used to going through security when it enters the Virginia Beach Courthouse. Starting August 12, all attorneys and courthouse employees will start getting used to it, too.

The Virginia Beach Sheriff's Office is making its screening process stricter and extending it to cover lawyers and workers. Only sworn public safety officers who have official business at the courthouse will be allowed to forego screening.

Because of the additional people who have to be screened, it likely will take people who are entering the courthouse longer to get inside it.

“The line will be longer with more people getting screened, so make sure that you allow yourself plenty of time to get into the courthouse,” said Chief Deputy Rocky Holcomb.

Court Security Lieutenant Lisa Clark said that you should check out the list of items you can bring into court before you show up.

"For yourself, know ahead what you can bring in. Safety is paramount, so we're going to make sure nothing is missed in the process,” said Clark.

Clark said to get to the courthouse early to get through the anticipated long lines.

"Be prepared and bring your patience because it may take you a little more time to come in- go through the process- and get into court,” said Clark.

The following items aren't allowed inside the Virginia Beach Courthouse:

"Public safety is our first priority at the Virginia Beach Sheriff’s Office,” said Sheriff Ken Stolle. “We understand that this change may be inconvenient, but we have to prioritize safety above convenience. We must also be proactive and ever-vigilant in fulfilling our obligation to safeguard the hundreds of people who come into the Courthouse every day.”

The Virginia Beach Sheriff's Office said that security staffing will be increased to facilitate the additional screenings.

Everyone entering the courthouse will be searched with a magnetometer and their belongings screened by an X-ray machine.

Items prohibited inside the courthouse:

Holcomb said the municipal center shooting only increased their confidence in the need for more security.

"We were working on this before the May 31 shooting, but on that tragic day, this reinforced our need to double down on our security and make it more secure than it has been,” said Holcomb.

Local Alice Humphrey said she's glad to see a boost in security measures after the tragedy in Virginia Beach.

"It kind of like shook people up, and some people are probably afraid. You don't want to go in there and something happen to you while you're in there and people have stuff on them that they are not supposed to have,” said Humphrey.

Public safety officers, attorneys, reporters, and employees with required credentials will still be allowed to bring their cellphones, laptops, etc. into the building. Security personnel retains the right to prohibit any item they deem a potential threat to public safety.

“We will do everything we can to make our enhanced security screening process as efficient as possible,” said Holcomb. “You can help by giving yourself some extra time, leaving unnecessary items at home and being prepared to be searched. We appreciate everyone’s patience and understanding as we work to make the Courthouse as safe as it can be.”