"This is a decision that's going to affect them for years to come," Mayor Bobby Dyer said. 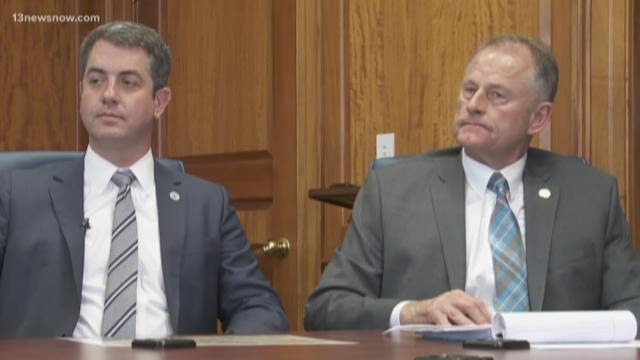 In a search for the next city manager of Virginia Beach, the city hosted a town hall Monday night to get input from the public about the ideal candidate.

The room in Building 19 at the municipal center, which could fit more than 100, only had a crowd of about a dozen.

Armed with large legal paper and squeaky, pungent markers, two representatives from an independent firm asked a crowd of about a dozen what qualities, characteristics and experience they want the next city manager to have.

"I hate to say it but the individual that was in place that left, you could not get a hold of him at all," one man said, referencing Dave Hansen, who resigned in August after city leaders questioned their confidence in his abilities.

While Hansen's name was never uttered, his leadership style was referenced a few times Monday night.

"Any organization takes on the characteristics of its leadership," another man said.

Issues like sea-level rise, the military and economic growth came up, too.

"Somebody to think more about what any kind of project is going to do to impact your fellow citizens," a third man said.

The May 31st mass shooting was also brought up, with people wondering how a candidate will approach a healing community.

"This is going to be part of the culture and DNA of Virginia Beach that we're going to continue to embrace all those adversely affected," Mayor Dyer said.

Mayor Dyer said he's asked the consultants to seek out a candidate with empathy. But the purpose of the town halls is to understand what the public needs from this person.

"It's important that they know they have the right leadership in place," Dyer said.

There will be three more opportunities this week for people to come out and give their input.

If you can't attend the town halls but still want to give input, there's more information on how you can participate here.