Excavating nests allows researchers to check for straggler hatchlings and learn about the nest's success rate. 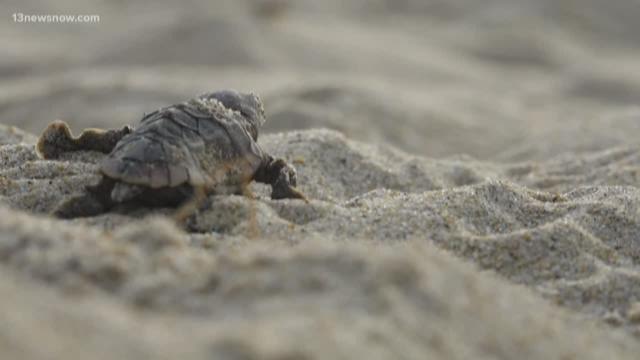 Excavating nests allows researchers to check for straggler hatchlings and learn about the nest's success rate. Researchers have been keeping a close eye on a handful of nests at the Virginia Beach Oceanfront since they were laid.

Research Coordinator for the Virginia Aquarium Susan Barco said there’s a lot of activity that goes on beneath the sand.

During their excavation, researchers found 11 little stragglers. The hatchlings found Tuesday will stay with Virginia Aquarium for the next year before they are officially released, so they can be studied. Officials will also tag the turtles, and strengthen them so they can return in the future.

Usually, when the turtles leave the nest and aren't stragglers, they imprint. Imprinting is when the sea turtles leave a beach then, years later, locate the same area of coastline after traveling long distances through the sea.

Female turtles usually return to the same beach around the age of 30 to lay eggs of her own.

The Virginia Aquarium & Marine Science Center Stranding Response Program is responsible for rendering aid to all marine mammals and sea turtles that come ashore in Virginia. Whether sick, injured, dead, or entrapped, the Stranding Program works to examine these animals and provide the most humane course of action given the situation.

Click here to learn more about the Stranding Response Team.

RELATED: Loggerhead sea turtles hatch, head to ocean with the help of the Virginia Aquarium