Inspired as a child, Maj. Paul 'Loco' Lopez is the solo pilot of this United States Air Force demonstration team. 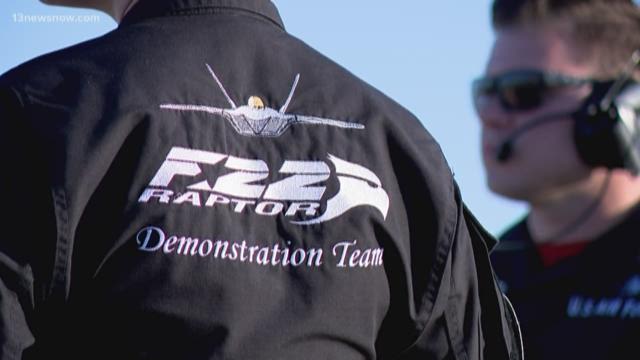 HAMPTON, Va. — A Hampton Roads native is breaking the speed of sound, and fulfilling his passion, just miles from where he grew up.

Maj. Paul 'Loco' Lopez and the F-22 Raptor demonstration team are based out of Joint Base Langley-Eustis in Hampton.

"I'm loco about life. I love being a fighter pilot. I love what I do, and I'm just crazy about the Air Force," Lopez, who grew up in Virginia Beach, said.

13News Now was invited to a practice demonstration Thursday, witnessing the sheer power of the stealth fighter jet up close with Maj. Lopez in the cockpit.

Due to the jet's top-secret nature, unique to the United States Air Force, we can't even show you certain angles of the F-22.

It can 'super cruise' and go faster than the speed of sound without afterburner.

"It's really exhilarating and thrilling to be a part of the team, and that's the keyword: team," Lopez said.

The jet can perform some wild maneuvers that do have practical application for combat, but the mission is much bigger than wowing crowds at air shows around the country.

"I think when people see the F-22 Raptor Demonstration Team, they see diversity in action which represents the total force for the Air Force," he said. "They see men and women from various and diverse backgrounds, different colors, different genders come together to recruit, retain and inspire American airpower."

"The Tidewater area is definitely a great military community, military friendly and you just see jets flying around all day every day and that's what inspired me and that's where the passion developed," Lopez said.

Lopez is finishing up the second year of his two-year commitment with the team. He said it's a somber feeling to know the show season is almost over, but that he's loved every second of it.