Police were investigating a report of credit card theft when they cuffed Jamar Mackey in the mall's food court in front of his family. They had the wrong person. 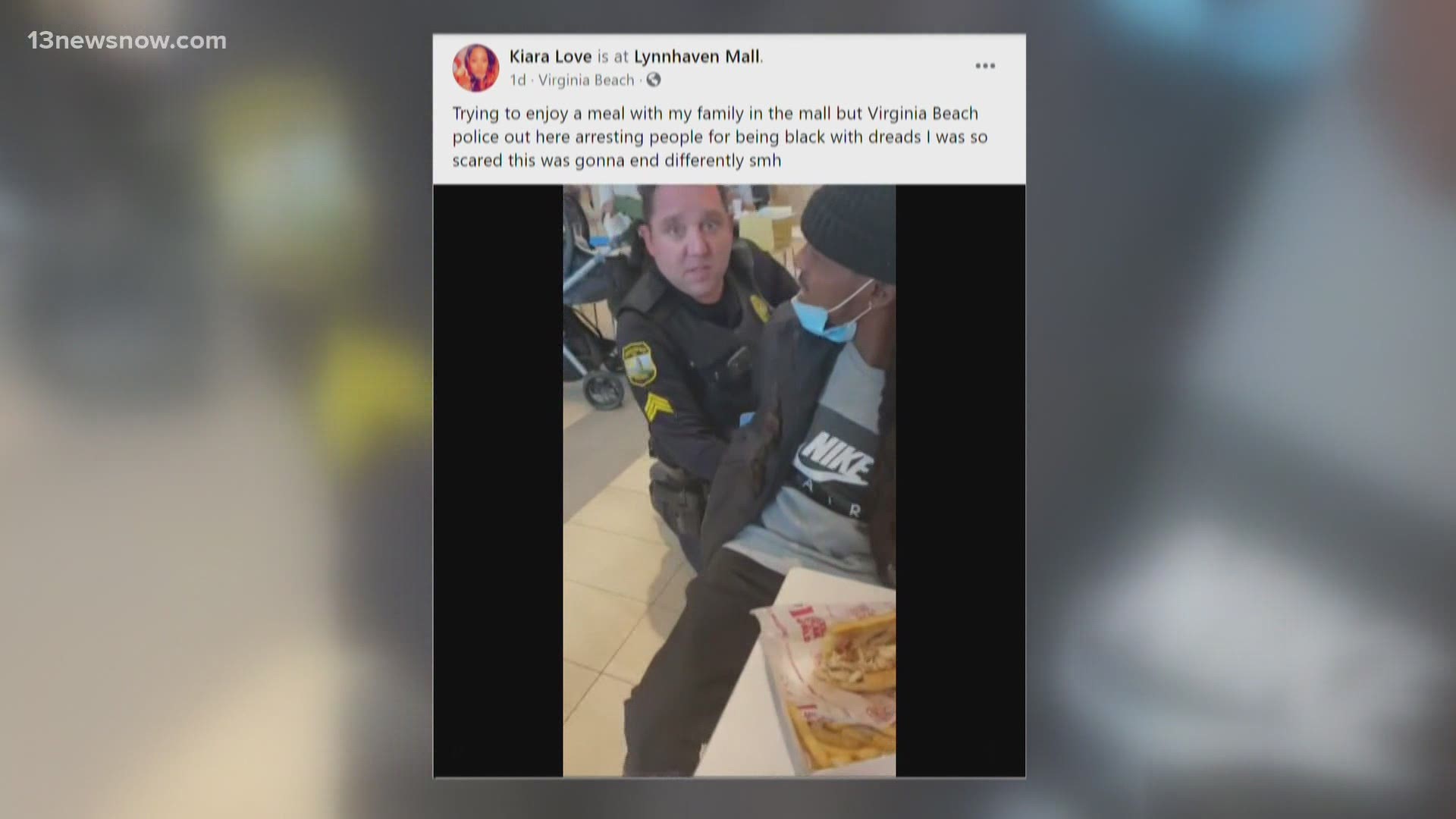 VIRGINIA BEACH, Va. — Police Chief Paul Neudigate apologized Monday to a man whom police mistook for a person wanted for credit card theft at Lynnhaven Mall and whom they handcuffed in front of his family and a crowded food court.

Jamar Mackey's fiancée recorded the incident as it played out Saturday in front of her, his baby, and his 13-year-old son.

In short, Neudigate said at a news conference: "We could've done this better."

The chief explained that officers had a report of stolen credit cards at the mall and that Mackey matched the description of the suspect they had.

In the video Mackey's fiancée shot, you hear her tell the officer who handcuffed Mackey that he had the wrong person. The officer took Mackey out of the food court and outside of the building. A short time later, the officer released Mackey.

Neudigate said as a result of the attention, the department will review its policies and procedures. He also said the department has to recognize when its actions “greatly inconvenience a member of the community."

Neudigate did not say what officers should’ve done differently, instead saying the event is under investigation to answer that question.

"No one wants to be handcuffed in front of their family, in front of the public, like the officer did on Saturday. We apologize for the discomfort that was caused in this incident. As a result, we are focusing on two main areas: Was the initial approach and stop justified, and was the use of handcuffs justified?"

The officers did not have body cameras, which Neudigate says is a shortcoming he wants to fix by supplying everyone with cameras. He asked Mackey to call the department so Neudigate can apologize to him in person.

Police said that since the incident on Saturday, they had arrested 28-year-old Markee Smith. He's charged with four counts of credit card fraud, receiving stolen goods, and two counts of felony probation violation.

As a result of more than 1.5 million views on Facebook, several local leaders are speaking out about the incident.

“It was just wrong and it was wrong for a number of reasons,” explained Virginia Beach NAACP president, Dr. Karen Pruden. “My empathy level is off the charts, but my level to see change is even higher than my empathy level, because change has got to happen.

She released a statement on behalf of the Virginia Beach NAACP, saying:

"The Virginia Beach NAACP strongly condemns the apparent racial bias on display in the video clip that has widely circulated on social media today. In the midst of a global pandemic, Virginia Beach police officers - without masks or personal protective equipment - mistakenly detained a Black man who was spending quality time with his family. As a Virginia Beach officer stated “you have the right to be upset,” and indeed we are just that: quite upset.

"The NAACP will not rest until every Black citizen in Virginia Beach can shop, dine, and travel without being racially profiled by our city’s police officers."