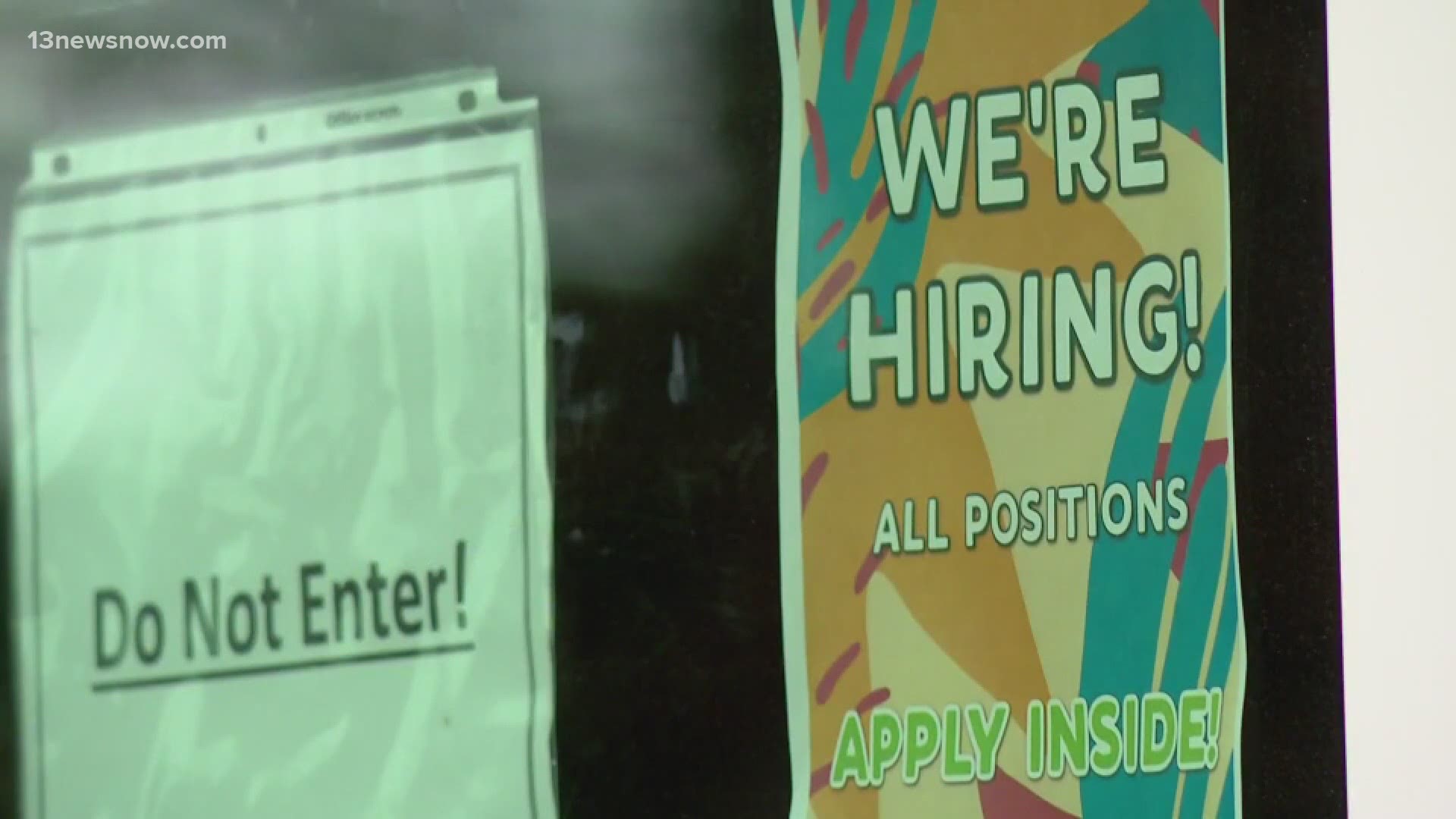 VIRGINIA BEACH, Va. — The restaurant businesses may be back up and running, but the same can’t be said for the people who once worked there; and unemployment assistance payments are partly to blame for the restaurant industry’s workforce struggles, according to Mayor of Virginia Beach Bobby Dyer.

“One of our iconic restaurants, Mary’s had to close due to lack of people to work there," Dyer said. “The blessing and the curse was the unemployment people were getting. People elected not to go back to work even though they had the opportunity.”

According to officials, it's not just Virginia Beach. Cape Charles Mayor Smitty Dize said it’s a problem affecting a lot of cities.

“If the government keeps feeding people money, they’re going to sit on their tails," Dize said. “My biggest restaurant in town right now is talking about closing two days a week.”

Workers’ advocates have pointed to low wages and health concerns as reasons workers aren’t returning. Job experts also said workers may have learned new skills during the lockdown and transitioned to other industries.

Meanwhile, a representative for Luria’s office said, research shows unemployment assistance during the pandemic does not affect whether people stay home or look for work.

Dyer and Dize were part of a virtual roundtable discussion with congresswoman Elaine Luria and other mayors in the area about how the pandemic has affected Virginian cities.

Dyer said the money could augment current efforts by Virginia Beach to provide job training and give grants to small businesses.

“Throughout the region, a plethora of opportunities and help wanted signs out. Hate to say it, until the unemployment goes away, it’s going to be problematic," Dyer said.

Luria said the money can be used broadly, at cities’ discretion.

RELATED: 'We are hoping some miracle will happen' | 757 business owners struggle to hire staff as the summer season nears

“The reach and impact of COVID has been so broad that I think this rescue plan really appears that it’s going to provide some additional assistance to boost the economy in the correct direction," she said.

Norfolk is in for a sizable grant from the government.

“The funding level most recently provided to us and we’re still seeking clarification on the final numbers with the formula. The amount coming to Norfolk is just in excess of $159 million," Luria said in response to a question from Norfolk Mayor Kenny Alexander.

Alexander said this past year hasn’t been easy on anyone, and there are a few things on the table this money could go towards. One of them is education.

“Children who have already shown signs that they’re lagging behind, that they may have to repeat a grade, certainly we would look at offering that population maybe year-round instruction," Alexander said.

He said he also wants to help small businesses, address healthcare inequities, invest in public safety, as well as affordable and inclusive housing.

“The money will be used to address the negative impacts that COVID has had on our cities and our communities,” Alexander said.

He also took note of the number of people who needed government assistance during the pandemic and pointed to a rise in people experiencing homelessness.

“We are seeing tents around 19th street. It’s been called ‘Tent City’ by the media," Alexander said. "Certainly we would like to find transition housing for those individuals; or bring them in some type of shelter and provide the various serious – be it, workforce development.”