The Virginia Beach Planning Commission is holding a public hearing on the proposed development on March 11. 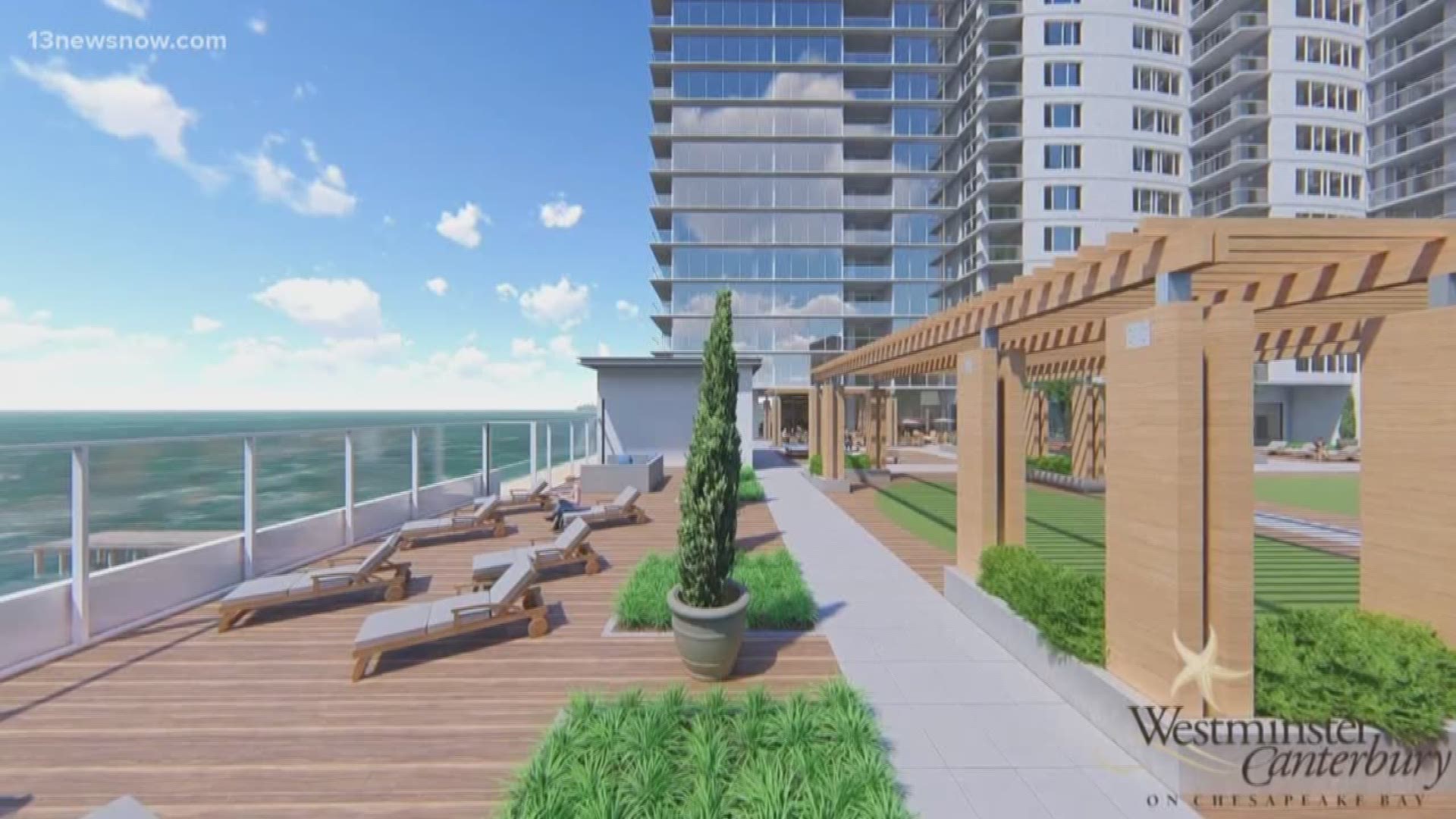 VIRGINIA BEACH, Va. — Leaders at Westminster-Canterbury want to expand their senior living community by building a 22-floor beachside resort next to their current campus. The planned development is creating mixed reactions among people in the community.

Westminster-Canterbury's CEO Ben Unkle said his goal is he wants to provide cutting-edge senior living. He calls the new building plans attractive, beachy and says it will fit in with the community.

The plan is to add 217 independent living apartments, 75 assisted living and 45 memory residences.

"This is a treasure location and you're building something that is going to be a permanent landmark and we want it to be great," he explained.

Unkle said the demographics of our region show Virginia Beach is facing an acute shortage in senior housing and services. According to the company’s website:

In a study published last year by Plante Morane, one of the nation’s largest CPA Business Advisory firms, Virginia Beach was listed as one of the top three metropolitan areas in the nation with the greatest unmet future need for senior housing. A second study by LeadingAge Virginia forecasts the “Silver Tsunami” in Virginia Beach will increase the senior population by nearly 50% in the next ten years.

These studies reflect our experience at Westminster-Canterbury. While our campus has grown over the past two decades, it still cannot keep up with the demand to serve residents of Virginia Beach and the greater Hampton Roads community. Currently, we have a waitlist of more than 500 families who have given us a deposit to secure a place in our community. Most are from Virginia Beach.

Unkle said the plan would take several years to complete. The goal would be to open the new building in 2026.

Unkle said, “There’s an outdoor activity deck over the parking lot that faces the water. It’s going to be beautiful.”

Westminster-Canterbury leaders are facing pushback from some nearby neighbors. The Shore Drive Community Coalition is opposed to the expansion as it is now. They are concerned about the increased height and density. They and many others said there was not enough dialogue.

“This was just sprung upon the community -- Starfish Road and Ocean Shore -- of basically a done deal. There was no input from the communities until late last year and early this year,” Lisa Leidig explained.

Leidig lives beside the development and she worries about the size of the building, noise, traffic, and her beach access.

Unkle said the plan now moves the public access to the beach from one side of the pier to the opposite side. It would be larger and more accessible.

“The beach belongs to everybody and when we finish, we will have better beach access from when we started it. It will be a nice flat surface, with cutouts for turnout and will be handicap accessible,” said Unkle.

Another concern from community members is how will this new development affect Virginia Beach Fire and EMS: will they need to hire more staff?

Unkle said Westminster-Canterbury has a doctor’s office on site.

“Ambulances come occasionally, but not unnecessarily high. One good thing is we pay property taxes. We pay more than $1 million in local property taxes and we use very little city services for that.”

Unkle also said several studies were done on traffic and how the expansion could affect the beach, but community members want them done by the city, not a third party.

Leidig said, "It makes me angry. I live in the bayfront because it is a quiet community. It's a local community. It would completely change our neighborhood."

The Virginia Beach Planning Commission is holding a public hearing on the proposed development next month.

Empsy Munden said, "We just feel like this may be a little bit more than this community can handle environmentally."