Virginia Beach police said a driver died after her car hit the side of a cement truck on Oceana Boulevard. 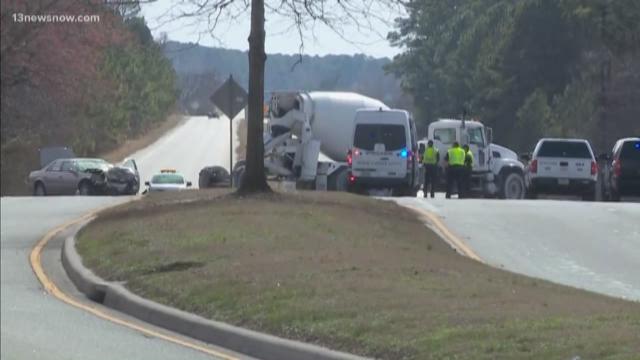 The wreck happened shortly before 11 a.m. in the 100 block of Oceana Blvd. For a time, Oceana Boulevard was closed in both directions from Bells Road to the S-curve near Louisa Avenue.

Investigators said 70-year-old Deedrie Naomi Lewis was driving a Cadillac Seville northbound on Oceana Boulevard when the cement truck pulled out from a private access road and entered the intersection to turn left onto southbound Oceana. That's when Lewis' car hit the driver's side of the cement truck.

An off-duty Virginia Beach police officer heard the crash and ran to the Cadillac. Lewis had stopped breathing, and the officer began life-saving efforts until Emergency Medical Services arrived.

Lewis died at the scene.

Police said the driver of the truck was issued a uniform summons for failure to yield right of way.