A study from the American Academy of Neurology found those with sleep apnea may be at a higher risk of developing Alzheimer's disease. 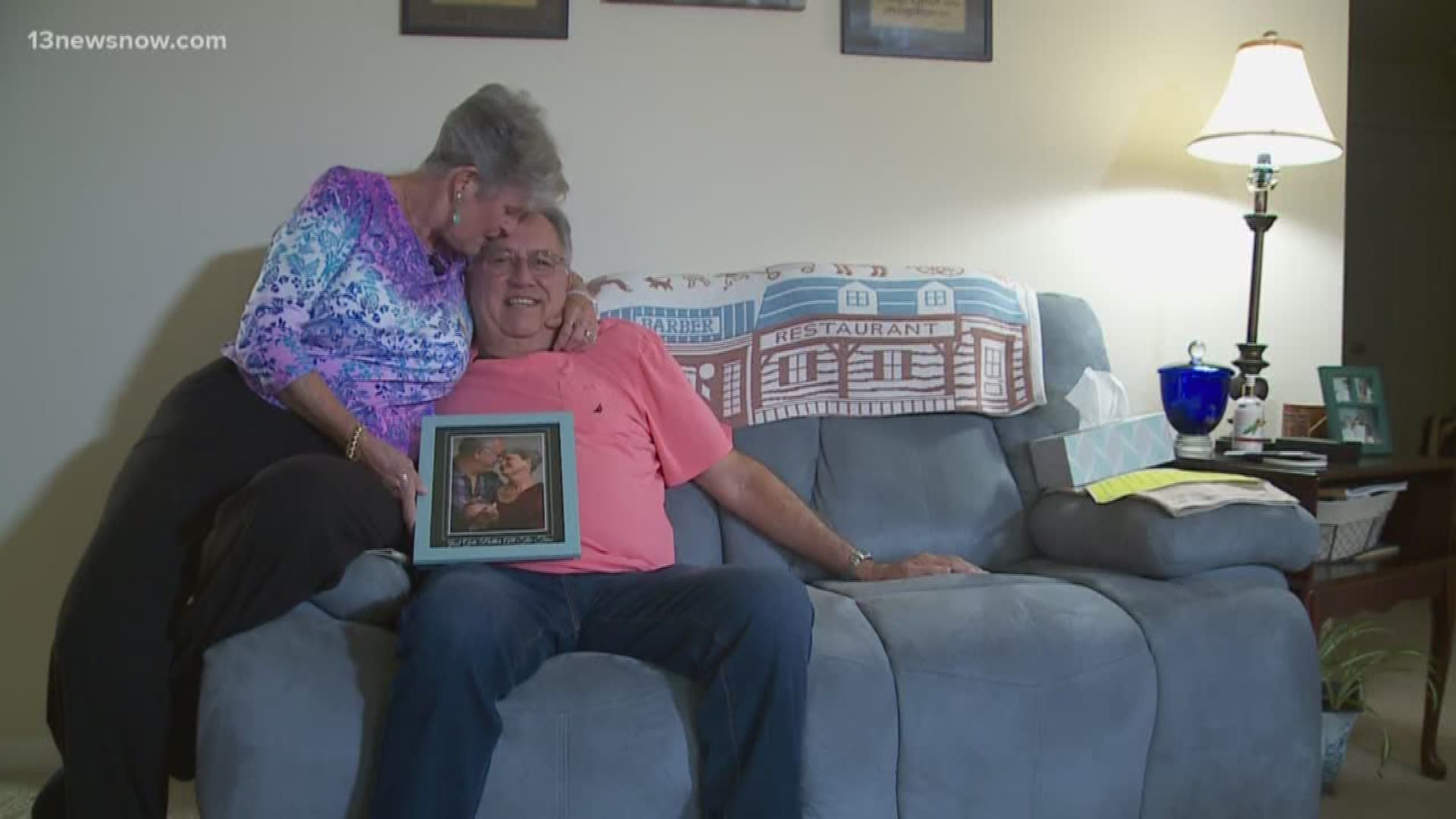 CHESAPEAKE, Va. — Millions of Americans battle sleep apnea, a condition that causes people to stop and start breathing in their sleep.

A new study from the American Academy of Neurology found those with the condition could be at a higher risk of developing Alzheimer’s disease.

For a Chesapeake couple, living with sleep apnea and Alzheimer’s disease is a difficult reality.

Liz and Wally Osgood have been married for 27 years. The two share a bond of two best friends.

“A lot of people think we just got married,” said Liz. “He’s been the glue that holds our family together.”

About a year ago, the family realized little things started to change with Wally.

“We went out to Bravos for dinner and it wasn’t just a few days later in the same week, he started talking about going to Bravos, and asked, ‘Have you ever been there?’” said Liz. “It became things we couldn’t deny.”

Wally began forgetting things and getting lost. Soon, he lost his ability to drive.

After several visits with different doctors, Wally was diagnosed with Alzheimer’s, a disease without a cure.

Doctors told the couple that Wally’s sleep apnea condition may be linked to an Alzheimer’s diagnosis.

Researchers with the American Academy of Neurology found that sleep apnea causes the accumulation of tau protein deposition in the brain. Tau is a protein that forms into tangles, which is found in the brains of Alzheimer’s patients.

As he increasingly forgets details and stares blankly at Liz, Wally’s memory is slipping away. Doctors have given him a CPAP machine to help him breathe through the night, but Liz said it prevents him from getting good sleep. Doctors told them the breathes he doesn’t take worsen the Alzheimer’s disease.

It’s a sad reality for the two best friends in love.

There is nothing doctors can do to slow his Alzheimer’s disease from progressing.

George Bloom, a Biology Professor at the University of Virginia has done extensive Alzheimer’s research.

“Sleep plays an important role in protecting against Alzheimer's disease. There are these things called tau that build up in your brain. Sleep is known to help those lymphatics flush out of the brain, bad forms of tau, and we think amyloid as well. That’s why sleep is so important and anything that interrupts a good night sleep like sleep apnea can be very deleterious,” said Bloom.

Even with the odds against him, Wally continues to keep his head up.

“I can’t complain, life has been good to me. If it ended today, I’ve had a full life,” said Wally.

The unknown road ahead brings the couple closer together.

“It tears my heart away to waste one minute because I don’t know what we have in time together,” said Liz.