'Next will be to understand why' | Students, parents react after two shot inside Newport News high school

Two 17-year-olds were shot inside Heritage High School. Both are OK and one suspect is in Newport News Police custody. 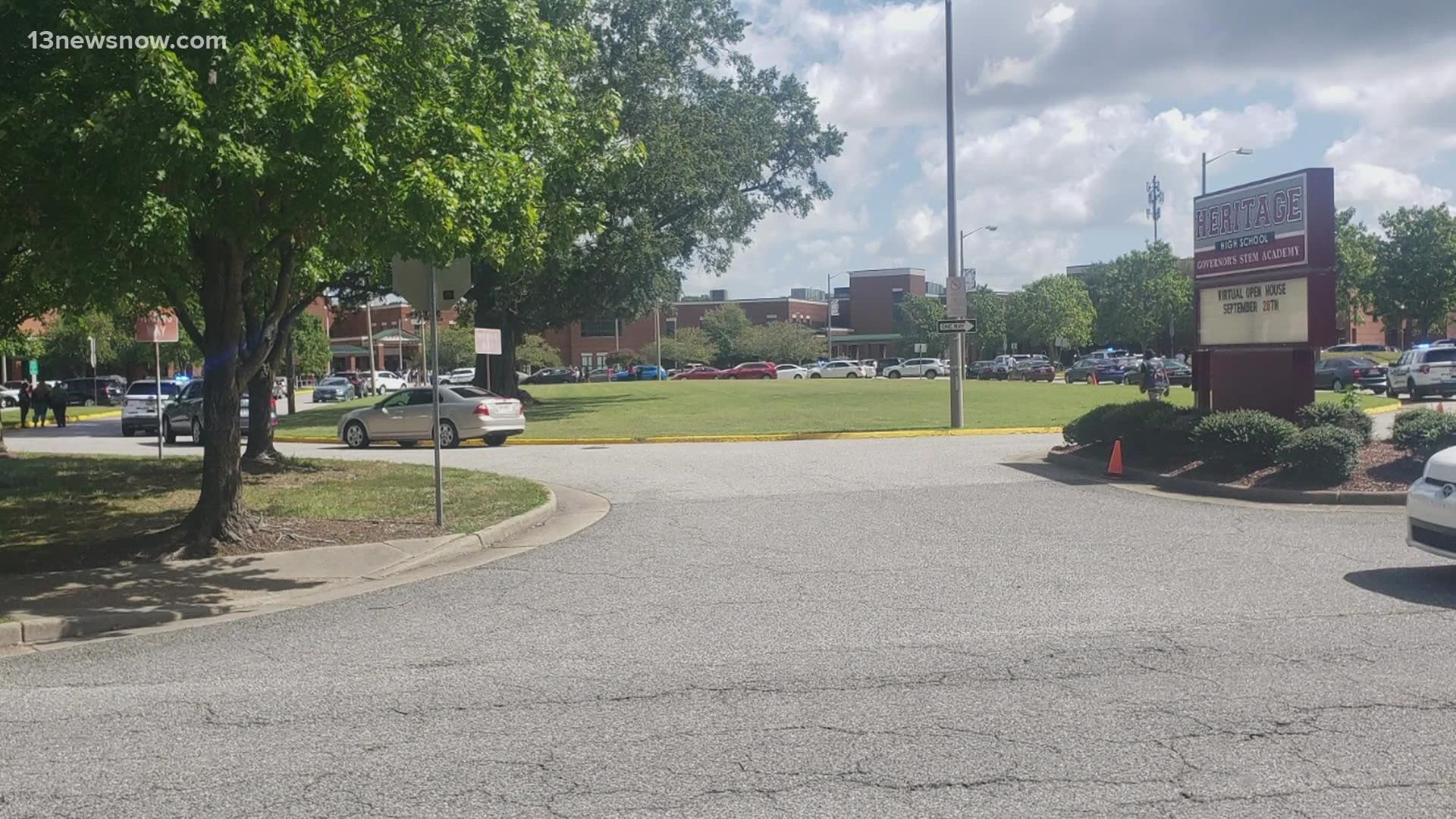 Both are alive and recovering, and the suspect is in custody.

"Get as many units as I can to the front of the school right now," an officer said minutes later.

Jayden Swilling was inside the school when the chaos started.

"We heard on the announcements 'lockdown, lockdown.' At first, we thought it was a drill," he said. "Then they said it is a shooter in the school. We all was in the corner and we was quiet."

According to Newport News Police, a boy was shot in the side of the face, and another girl was hit in her leg.

"Everyone started running and pushing me over. I did fall to the ground for a split second," she recalled. "But I had enough strength to get up and run out of there as fast as I could."

Curtis Collins said from his classroom, he heard six shots.

When students evacuated the building, they were sent to the tennis courts where parents were able to meet them.

Pastor Thurmond Leonard said when he got the call from his grandson, he dropped everything.

"I made it my business to stop what I was doing and rushed here."

Around 2:50 p.m., the suspect was taken into custody off school property.

Drew said the suspect is a teenage boy, but would not confirm if he was a student at Heritage High.

"Next will be to understand why. Why did this happen what was the motive for this to occur."

Two other students were taken the hospital who were hurt in the rush to get out of the building.

One with a hurt arm, the other with breathing problems due to asthma.

Drew said they [the police] are relieved everyone is alive.

"The most important thing is to make sure everyone is okay."

Heritage High School and Huntington Middle School will be closed on Tuesday.

The school division acknowledged what happened Monday may cause trauma or anxiety for their students and staff, so they’re reminding everyone to contact a school counselor or mental health therapist for guidance or support.

In a tweet Tuesday morning, the school announced that a support hotline has been established to assist students, parents and staff. Those who need counseling or support can call 757-283-7868. Specialists will be available from 7 a.m. to 7 p.m.

A Support Hotline has been established to assist students, parents and staff. Canes can speak to a support specialist for counseling or support in response to Monday’s events, please call 757-283-7868. Specialists will be available from 7 a.m. to 7 p.m. #5800Family pic.twitter.com/S11o69vwNX