North Carolina Highway Patrol said 16-year-old Logan Grubb died after his truck went off the road and hit a tree before ending up in a swamp. 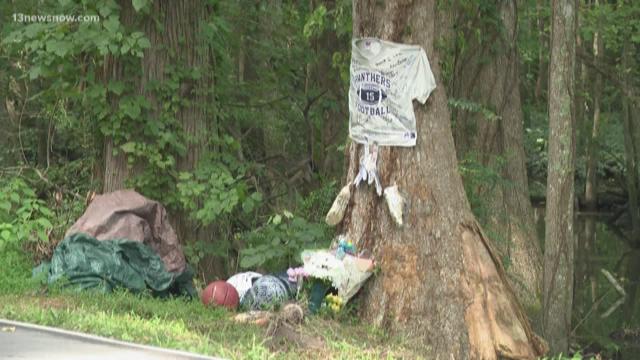 PASQUOTANK COUNTY, N.C. — An Elizabeth City teen is dead after his truck when off the road an hit a tree.

North Carolina Highway Patrol responded to the scene of a crash Monday night. When they arrived, they found a pickup truck had gone off the road and crashed.

According to police, 16-year-old Logan Grubb was the only person in the truck. They said Grubb was driving his truck west on Berea Church Road when he went off the road, over-corrected and hit a tree.

Police said the truck ended up in a swamp.

Grubb was pronounced dead at the scene. The 16-year-old was a student, football, and basketball player at Pasquotank County High School.

On Tuesday night, members of his football team created a memorial for him along Berea Church Road.

Deanna Halstead, a student who knew Grubb, stopped by Wednesday.

"He was such an influence to many young people. He was a very good athlete, he was a quarterback, always happy to be around, smiling," said Halstead. "It’s definitely going to be hard for everyone, especially his teammates. This will be hard for a very very long time."

Rashawn Spencer, the head football coach at Pasquotank County High School said Grubb was a natural leader on the team, and other players gravitated toward him.

"His effort towards everything that he did, reaching back and helping somebody up, it was amazing to see that in such a young kid," said Spencer. "He wasn’t just a player for us, he wasn’t just a teammate. He was a brother, he was a son, he was family for us. It was a major shock when we found out. It just floored everybody, it was kinda like we were in a dream."

Spencer said he saw Grubb for the last time on Sunday, the day before Grubb died.

"The last thing I said to him was, 'I’ll see you tomorrow.' That’s what’s devastating is, you don’t know that's the last time. I guess if I would’ve known I would’ve given him a hug or said more to him, that’s what makes it the hardest," said Spencer.

Police said Grubb was wearing his seat belt at the time of the crash, but it's unknown if drugs or alcohol had a role in the crash.

A trooper with NC State Highway Patrol said Grubb was not speeding.

A spokesperson with Elizabeth City-Pasquotank Public Schools said in a statement:

The Board of Education, Superintendent Edmonds and the ECPPS family are deeply saddened by the loss of our student.  Logan was not only our student, but also the son of one of our educators. We share sincere and heartfelt condolences with his family and friends.

The spokesperson said there will be additional counselors and support staff for students and staff.