'It does not represent the people of North Carolina': Cooper reacts to Trump NC rally, RNC convention 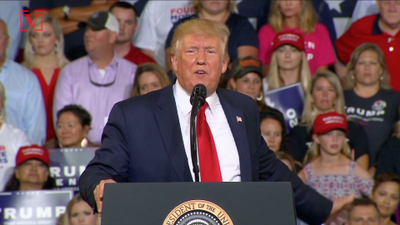 In an interview with news media after touring an outdoor trail in Hickory, Governor Cooper addressed the Greenville crowd's chants of "send her back" in response to the president's ongoing feud with four Democratic congresswomen.

The chants referred to the president's tweet saying the four lawmakers, who are all U.S. citizens, should go back to their home countries.

"It does not represent the people of North Carolina," Gov. Cooper said. "We do not need people using that kind of divisive language, and I think it's important for us to emphasize the things that bring us together."

While some Charlotte Democratic leaders and citizens are pushing to cancel the city's convention contract in response to the rally, Governor Cooper, a Democrat, still supports having the convention in the Queen City.

"Obviously people are concerned about security, and we need to make sure that security is at its best so that people stay safe and protected," Gov. Cooper said. "I think we have to look for the positive things here, and I think the positive things are what this can do for our economy."

The RNC will hold its second day of summer meetings about the convention at the Spectrum Center on Friday.

No longer getting notifications? Click here for the new WCNC app

'There was an explosion at my house!' | Ballantyne homeowner pleads for first responders to find his wife in 911 call