NCDOT crews worked to remove wind-blown sand from portions of NC-12 stretching from the Basnight Bridge to Rodanthe. 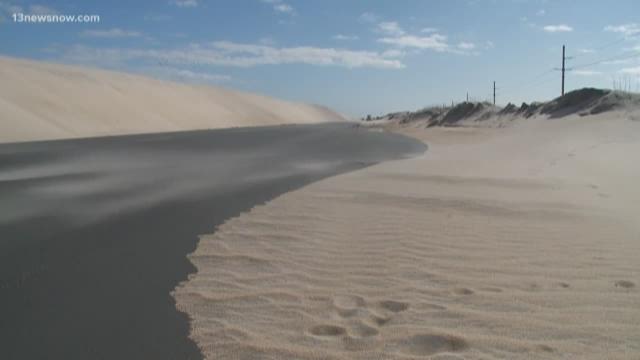 DARE COUNTY, N.C. — The weather caused some road problems on the Outer Banks on Wednesday.

Crews with the North Carolina Department of Transportation (NCDOT) cleared sand from NC-12 on Hatteras Island.

Crews spent the entire day trying to clear sand away from a stretch of the highway from the Basnight Bridge to Rodanthe. At times, it as an uphill battle due to strong winds that did not let up.

It was the third day in a row multiple trucks worked to clear the road.

Timm Hass, a public information officer with NCDOT, said clearing wind-blown sand away is a challenge.

“You could make the connection to in the mountains, if you’ve got a lot of snow they’ll plow it and the wind will blow it right back on. Sand is very much the same thing out here,” said Hass. “It's a priority for us because people who live on Hatteras, people who go through Pea Island they have to get to doctors appointments, work, they have to get back, so it’s a priority for us to keep this road clear and open the best we can in these conditions.”

Yvonna Rudd, a resident of Buxton has to cross the highway to get off the island. She said Wednesday’s commute was tough.

“It had gotten down to one lane and they were working on the one-lane so half of the road was gone so I kind of glanced over and a sand dune that built up was probably 40 feet tall and I’m like if a gust of window comes over, I’m buried,” said Rudd.

Hauling sand away by the truckload is a temporary fix, but Hass said they have to look at the bigger picture as they plan for this area's future.

“Ever since we began the Bonner Bridge Replacement Project we've undergone a coastal monitoring study. We’re studying wave heights, dune heights, the proximity to the road, all those kinds of things are going into every future decision we make about NC-12," said Hass.