'She saved my life' | Deputy honored for helping choking child

The student was coughing and having trouble breathing after a chicken nugget got stuck in his airway at Porter Ridge Elementary. 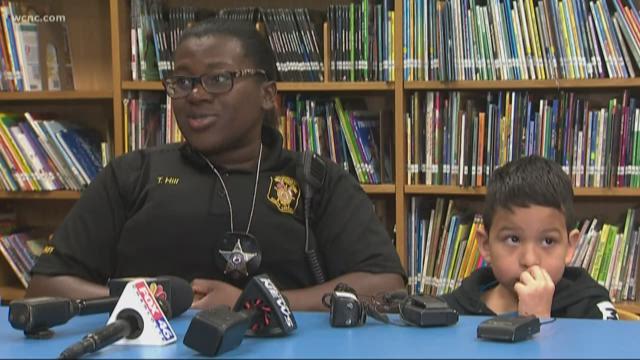 "I look over and see Kevin turned around," said Lowe. "I just wanted to get help immediately."

Gomez was coughing and having trouble breathing after a chicken nugget got stuck in his airway.

"It didn't seem like a normal cough," said Hill. "And at that time he took a big gasp, and then he fell to the floor."

Hill said that's when her training kicked in. She performed several abdominal thrusts, and, finally, the chicken nugget was expelled.

"The chicken nugget popped out in the trash can, didn't it?" Hill said to Gomez.

The little boy had his own press conference on Friday to help celebrate Hill's heroic actions.

"A hero is like someone who saves a person," said Kevin. "She's a hero because she saved my life."

"She's my hero, too" added Lowe. "You know to help in scary, uncertain situations."

Deputy Hill said anyone else would have done the same thing, and she was just doing a job she loves.

"That's my biggest thing, just making sure they know that I am here for them," she said. "If they need anything whether it's school related, or at home, if they need someone to talk to, that I'm that person they don't need to fear coming up to a police officer."