Mikel Brady was on trial for his part in a violent attempt two years ago to escape from Pasquotank Correctional Institute where four people were slaughtered. 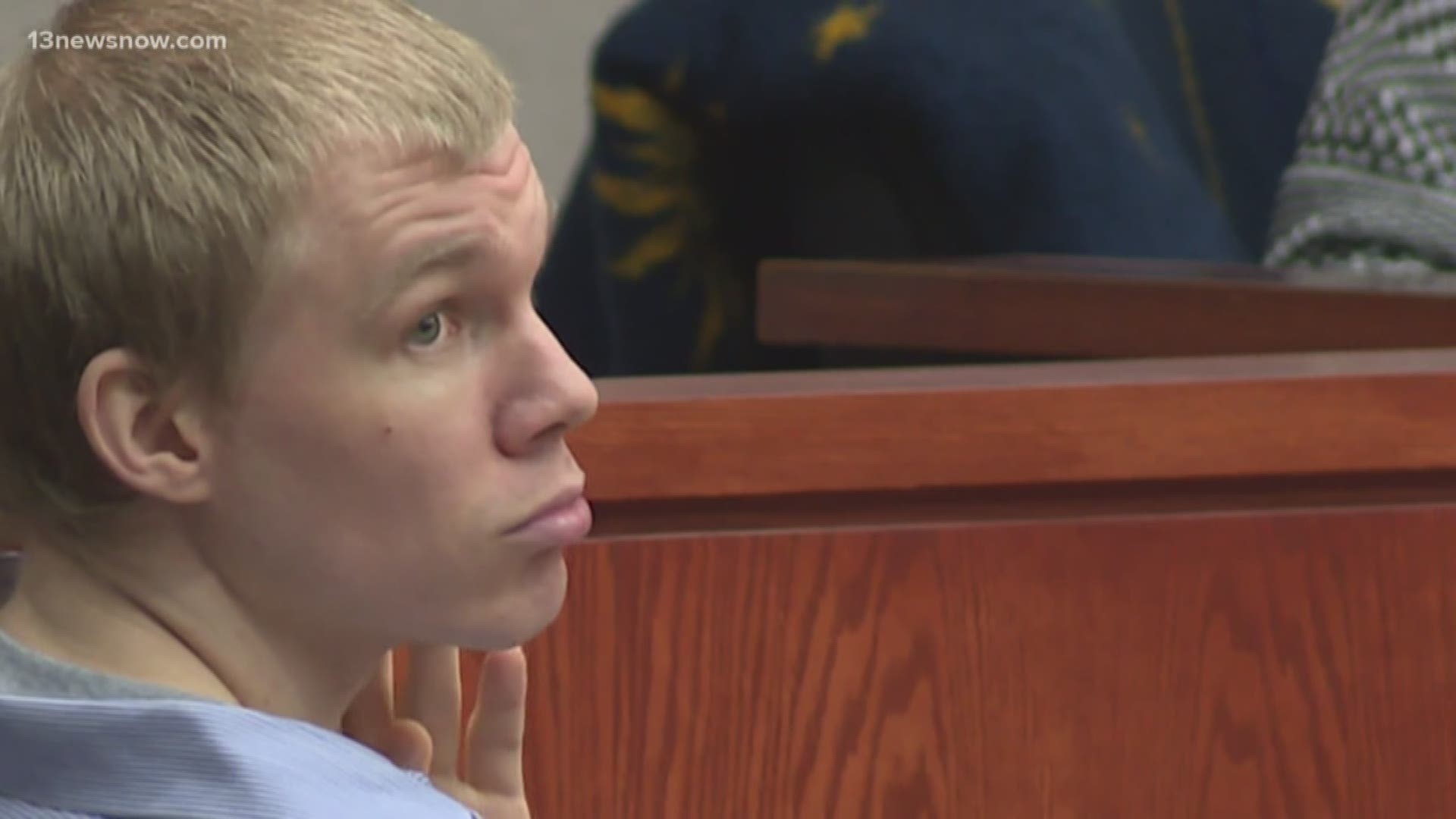 MANTEO, N.C. — One of four men, Mikel Brady, is on trial for murder after the violent attempt at escaping Pasquotank Correctional Institute in October 2017 where four people were killed.

After a verdict of guilty was reached, Brady's mother took the stand.

Tiny Brady said she was 15-years-old when she was pregnant with Mikel. She was in high school, but she eventually married his father.

However, Tiny said Mikel's father, Mikel, was an awful person. He would "lock us in a room and hold us down."

Tiny said they were physically, mentally and sexually abused by Mikel's father. She tried to leave him, but she said he dragged her up the stairs.

A verdict has been reached in the case against Mikel Brady.

At 12:25 p.m., the judge told the jurors to start deliberating. In less than an hour, the jury found Mikel Brady guilty on all charges related to the attempted prison escape where four workers died on October 12, 2017.

13News Now reporter Ali Weatherton said Mikel Brady sat in silence when the verdict was given. He had no emotion on his face when he was found guilty of all charges including four counts of first-degree murder.

Before the verdict was given, the State and Defense finished their closing arguments.

District Attorney Andrew Womble said to the jurors, “When you hunt with a pack, you are responsible for the kill.”

In the closing arguments, Brady’s attorney said, “I’m not going to deny that my client did not participate in what happened.”

Relatives of the four victims who died in the escape attempt testified before the verdict came down.

Jasmine Herring, daughter of Veronica Darden, talked about the close relationship she had with her mother. "She was my best friend, I could tell her everything. We talked at least three to four times a day," Herring said.

Deborah Howe was Jeffrey Howe's only child. She recalls how much working at the prison meant to her father. "He really loved that job. He only worked there for a year," Howe said. "You never get over this."

Justin Smith's mother, Melanie Mathewson, says she still struggles emotionally with her son's death. “Part of my heart is gone. It’s been so hard each day," Matthewson said. “He was such a good, good son since he was a child. Still from this day, I’ve been waiting for him to walk in the house."

Tammy Shannon Williams, the sister of Wendy Shannon, recalls her sister's generous spirit. "We were like twins. She cooked for everybody," Williams recalled. "She would give you the shirt off her back."

Testimony continues with more evidence from prosecutors. Video from the State Bureau of Investigations was presented to the court showing Mikel Brady telling his side of the story.

In the video, a shirtless Brady says he was serving 40 years behind bars and had nothing to lose by attempting the botched escape. He claims that prisoners were not treated fairly at Pasquotank Correctional Institute and that he wanted to break out.

He becomes tearful in the video citing the fact that he doesn't like to hurt people, but knows his part in the deadly incident was wrong.

During day eight of testimony, the prosecution presented prison surveillance video of the moments leading up to the deadly attacks of four prison employees at the Pasquotank Correctional Facility. Investigators said the video specifically shows Mikel Brady’s movements.

Special Agent Jennifer Matherly said that Brady and three other inmates collected weapons over a period of time in preparation for the attack. Investigators discovered hammers, scissors, a 2x4 piece of wood with nails in it and a pipe.

Prison surveillance video showed inmates stabbing and attacking an employee and then dragging the body out of view. Prosecutors allege Brady set a fire in the stockroom as a diversion. Jurors then saw footage of the prisoners trying to escape, with dozens of guards following.

Investigators said when they processed the crime scene, they found car keys in the fence line and survival backpacks that the prisoners intended on using if they successfully escaped.

A current prisoner, not one of the four charged with murder, is expected to testify in court.

After taking a full week to seat a jury, testimony began Monday in Mikel Brady's trial.

The judge told jurors to come back to hear the first set of witnesses testify.

On Friday, prosecutors told the court in opening statements that four inmates, including Brady, had planned the attack for months.

The defense argued that the Department of Corrections officers failed to properly evaluate Brady when he first entered the prison. They say he has serious mental illness and turns violent when he is not medicated.

13News News reporter Madeline Schmitt said it was a very emotional day in court. Jurors heard from people at the prison on October 12th, 2017, who tried to save the four victims.

Graphic body camera video from one of the first officers on the scene was also shown in court. The accused killer, Mikel Brady, never looked away as the 26 minutes of video played.

Family members of the four murdered Pasquotank correctional workers had a hard time watching the video. Some left before it started, others ran out of the courtroom crying midway through.

The video came from Elizabeth City Police officer William Davis, who responded to the attack and attempted escape.

"I've seen a lot of stuff, but the thing that's always stuck with me from this case has always been the smell and odor," Davis said. "I don't know if anybody's ever smelled it, I hope nobody does. But the odor of pure blood."

Following Davis, the prison's former lead nurse testified. She had a difficult time speaking about the condition of the two victims who were upstairs, Justin Smith and Veronica Darden.

Fighting back tears at points, she said it was clearly too late for both.

"That's when I told her, there's nothing we can do here. She's been lacerated, lacerated her carotid," Michelle Godfrey said.

When she was asked if she was able to find a pulse, she said no.

This afternoon, a former corrections officer at the prison testified that he was stabbed by an inmate while trying to stop Mikel Brady and the other three men from escaping.

The officer said the inmates involved all had various weapons as they cornered the officers.

It's unknown at this time if  Brady will testify during the trial, or if any of the other accused inmates will testify.

On day five of Mikel Brady's trial, attorneys were busy with jury selection and are choosing alternates in case a juror is sick or rendered unable to participate at any point during the trial.

Opening statements were also made. The state claimed Brady participated in all four murders, and he hurt more than just the four.

He and three other inmates planned the attack for months. They watched staff and looked at their schedule. Evidence shows Brady trained and mentally prepared.

Brady and the three other inmates stockpiled supplies and made their own survival bags. The State said he worked in the sewing plant and could get tools that could turn into weapons.

Brady and three others picked October 12th on purpose.

They killed Veronica Darden first. They took her radio and put her in an elevator and covered her body with trash.

Justin Smith was the second victim. They killed him in the supply room. Boxes in the room covered up the camera. They attacked Smith with hammers and scissors.

In the stock room, Brady and the three others cleaned themselves up. Brady changed his shirt used a coat to cover bloody pants. He then set a fire in the stock room.

Wendy Shannon was the third victim. She was expecting them to deliver trash downstairs and she was attacked. Brady killed her by hitting her with a hammer.

They also hit Geoffrey Howe with a hammer several times, and another inmate stabbed Howe in the chest. Brady continued to beat him with hammer.

After that, all four ran out of the loading dock on the fence. With them they had hammers, pipes and pepper spray. The scene was described as a war zone. Brady made it to the outer level of fencing They all got caught.

First responders come in near stock room. They said it was so bad that they couldn’t help Justin.

They then found Darren’s body. Her neck was completely ripped open.

The Defense Attorney Thomas Manning said the Department of Corrections didn’t properly evaluate him when he first got to prison.

Manning claimed Brady grew up in Vermont and has mental illness, abuse, and neglect his whole life. They said he is violent, but not medicated.

One of four men is on trial for murder after the violent attempt at escaping Pasquotank Correctional Institute in October 2017 where four people were killed.

Mikel Brady is charged with first-degree murder in the attack. Jury selection began Monday and is expected to last about three weeks.

Prosecutors are seeking the death penalty in Brady's case. They say he and three other inmates tried to break out of the prison and killed four prison employees in the process.

The people who were murdered in the attempted prison break were Justin Smith, Veronica Darden, Wendy Shannon, and Geoffrey Howe.

An autopsy report from the Medical Examiner shows that the victims died from getting hit or stabbed.

RELATED: Trial to be relocated for inmate accused in deadly prison escape attempt

Back in January, a judge ruled to move Brady's trial from Pasquotank County to Dare County because too many people in Pasquotank knew about the case.

The inmates started a fire in the prison's sewing plant that afternoon and tried to make their way past the prison yards, but were unsuccessful.

Mikel Brady, Wisezah D. Buckman, Seth J. Frazier, and Jonathan M. Monk were all charged with murder in the case.