Drew Pescaro, part of the UNCC class of 2021, was in the classroom when the suspect opened fire. 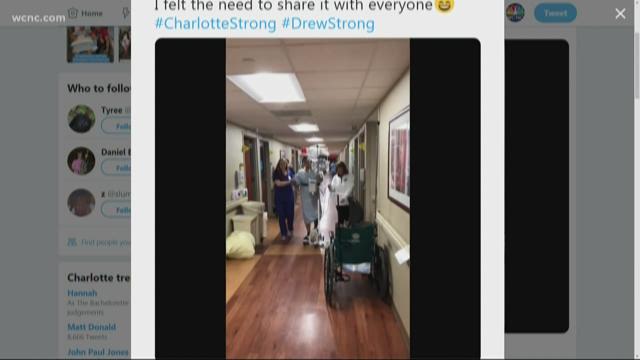 CHARLOTTE, N.C. — A UNC Charlotte student who was injured when a gunman walked into his classroom last month and opened fire took his first steps two weeks following the deadly shooting.

Two people were killed and four others were injured that night. CMPD identified the students killed as Ellis Parlier, 19, of Midland, N.C., and Riley Howell, 21, of Waynesville, N.C.

Several students packed the Kennedy room at UNC Charlotte for their final Anthropology lecture on their last day of classes. Their professor, Adam Johnson, had his students giving team presentations when a 22-year-old suspect walked in and began shooting.

Drew Pescaro was one of the four students injured that night and has been in the hospital ever since. Family members said Pescaro has undergone two surgeries but is now alert and recovering.

On the evening of May 13, Pescaro tweeted a video that shows him taking his first steps without a walker since he was hurt by the gunman on UNC Charlotte's campus.

"Took my first steps without a walker today so I felt the need to share it with everyone," Pescaro wrote.

On Friday, Pescaro had his final surgery. He tweeted that he was doing well. He also thanked his mother for her constant support in a sweet Mother's Day tribute.

I can’t say enough about my Mom who has been supporting me through this whole process. So much time has been devoted towards getting me better and she has been at the head of all of it. I love her very much.

Since the deadly shooting, Pescaro has been visited by a handful of Panthers players as well as receiving a personal Facetime call from one of his idols, Tim Tebow.