The Bidens toured Mrs. Bertamini's fifth-grade classroom at Yorktown Elementary School where 18 students were working on a science project. 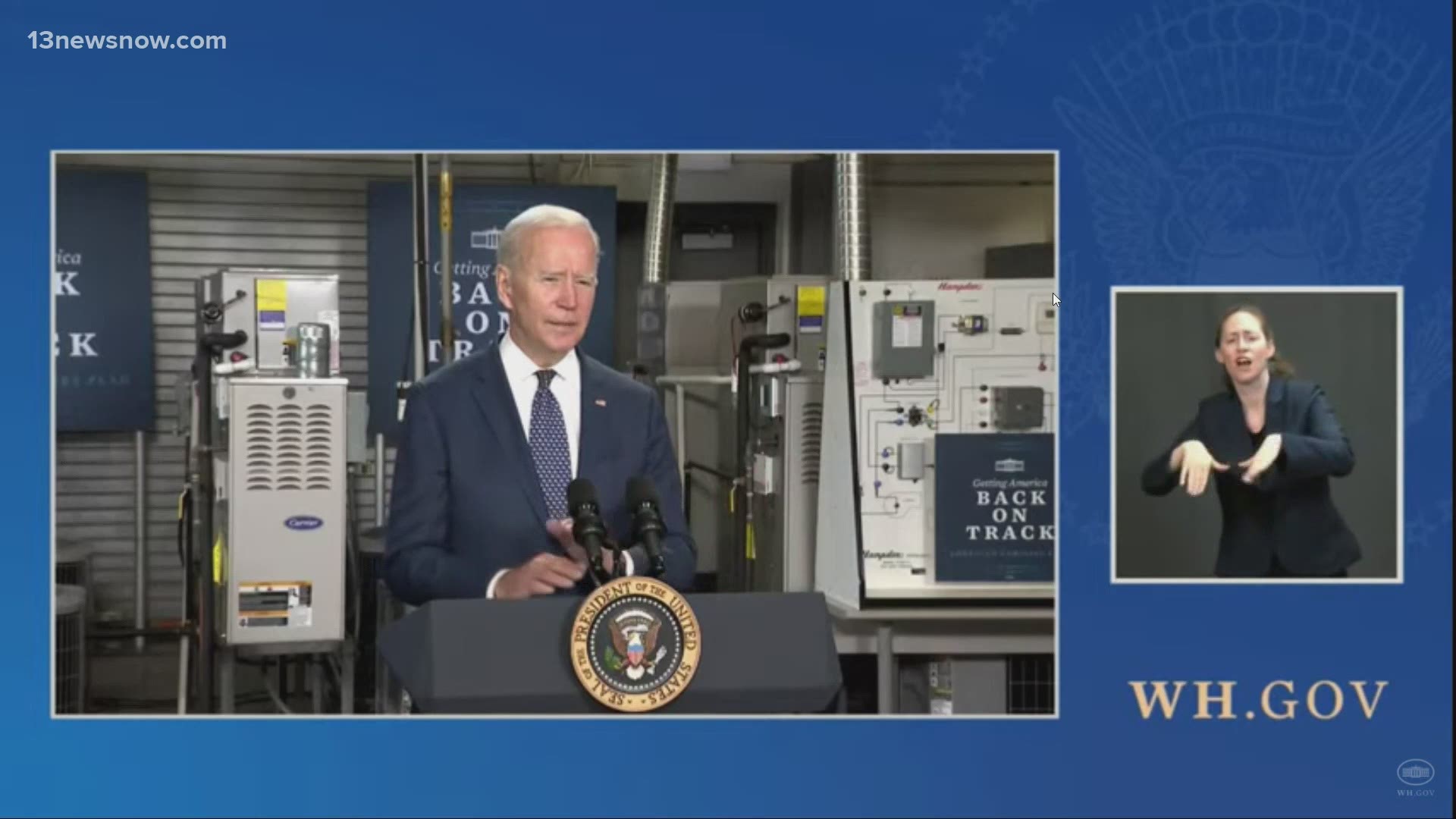 YORKTOWN, Va. — President Joe Biden and the First Lady made several stops in Hampton Roads Monday as part of the White House's Getting America Back on Track Tour.

The visit highlights how the American Jobs Plan and American Families Plan will benefit schools—including students, parents, teachers, and families, according to a White House news release.

The Bidens toured Mrs. Bertamini's fifth-grade classroom where 18 students were working on a science project.

President Bident was wearing his mask as he walked inside the classroom and gave a fist bump to a student.

Mrs. B welcomed the President and the First Lady and encourage them to walk around and ask the students about their projects.

Biden also asked the kids what they wanted to be when they grew up.

When the President asked the class how they like taking classes over Zoom, most said they did not like it. One student said it was "kind of fun."

The students come to class Monday/Tuesday, the school cleans on Wednesdays, and they return Thursday/Friday.

Each desk had a plexiglass divider at their desk.

The Bidens stopped in front of York High School, where they greeted a group of students and staff, including a group of Navy ROTC.

The President’s motorcade then arrived at the Tidewater Community College, Portsmouth campus later in the afternoon.

The Bidens visited the classroom of Harlan “Skip” Krepcik, who teaches about HVAC systems.

Krepcik spoke to the President and the First Lady and showed them what students learn at the campus.

He explained that the students take much of their coursework remotely, but come into the class to do their lab work.

Krepcik demonstrated an instrument they use to learn about the electrical controls of HVAC system.

“When they come into on campus, we just do the labs here. Body of human knowledge is doubling now every 12 hours," Krepcik said.

"We’ve taken that knowledge and building it into control systems and making it more efficient.”

The first couple did speak to students during the classroom tour.

The President made remarks and hit on topics free community college and pre-school, increased child tax credits and other features of his jobs plan and families plan.

He also pushed his plan to increase tax rates on the wealthiest back to where they were to pay for the college plan.

“Is it more important to shield millionaires from paying their fair share?”
Biden asked. “Folks, for too long we’ve seen that trickle-down economics does not work.”