Jeremy Stoke had 18 years of experience working in the fire service. He knew exactly what to do in bad weather. This was worse than bad. 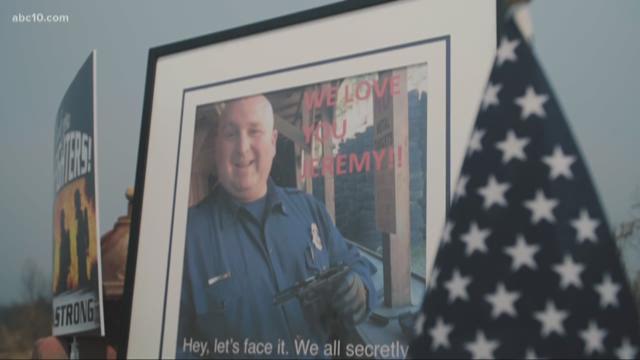 Firefighter Jeremy Stoke, 37, cut his own vacation four days short, volunteering to help when the Carr Fire started to force his neighbors around Redding to evacuate. Later that night, he died in the line of duty.

“He was rough and gruff on the outside, but he had a heart the size of Texas, and extremely intelligent,” said Redding Fire Marshal, Craig Wittner. “He was an extremely hard worker from the very beginning until the very end.”

Stoke was a fire inspector who worked with Wittner every day for years. His day-to-day job was to inspect buildings and investigate arson cases. But when wildfires threaten the community, everyone jumps in to help.

Stoke spent his final moments going door-to-door in Redding’s Land Park neighborhood, which was in the path of the fire after it jumped over the Sacramento River the night of Thursday, July 26.

That’s when Stoke got caught in the middle of something nobody saw coming— a wind phenomenon that some meteorologists consider to be an honest-to-goodness tornado made of flames.

“This tornado event that occurred is not normal,” Wittner said. “About 143 miles per hour, it was a category-three event.”

Witnesses reported seeing multiple fire whirls converge and become a much larger spinning wall of flames, which ended up pushing into homes on the East side of the Sacramento River.

Stoke had 18 years of experience working in the fire service. He knew exactly what to do in bad weather.

This was worse than bad.

Firefighters think the tornado lifted Stoke’s truck off the ground and tossed it into the woods nearby. They found him and his truck 60 paces away from the road they think he was driving on.

“It’s not something that I have ever received training to look out for,” Wittner said. “It could’ve been any of us. It would’ve been a shame for anybody, but it was Jeremy this time.”

A special accident review team is looking into the case to determine as much as they can about what happened.

Wittner says he’s eager to learn more about how his colleague died, especially whether there’s any new training that can be developed to help firefighters spot this sort of weather threat early.

While that work goes on, the community of Redding is coming together to honor Stoke. A makeshift memorial has gone up near the place he was found, covered with hats and badges from fire and police agencies near and far.

Rescuers plan a procession Saturday morning in Stoke's honor, followed by a public memorial to begin at noon at the Redding convention center.