Short-term rental options like Airbnb has divided a community in Virginia Beach. 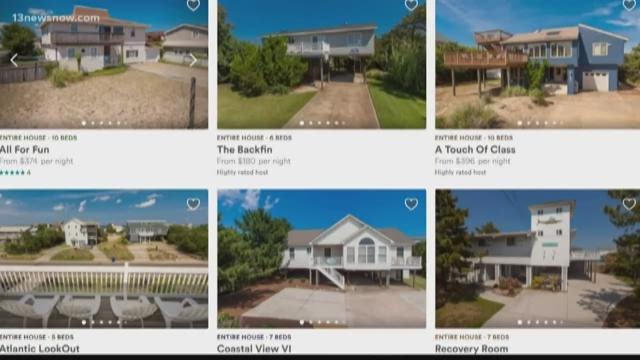 VIRGINIA BEACH, Va. (WVEC) -- Renting out homes to vacationers has been happening for decades in Virginia Beach. However, there is a debate in city hall about short-term rentals.

The city is trying to regulate vacation stays that are 30 days or less. On Tuesday, there was standing room only for when the public had their chance to weigh in on the topic.

On the website, Airbnb, there is everything from bedrooms, to homes, to mansions for rent in Virginia Beach, just for a night or two. Residents living next door to the rentals said it poses a real risk comparing them to mini motels.

“I believe the health, safety, and welfare of our residential neighborhoods in Virginia Beach has been overlooked,” said another resident.

“For God sakes, I don’t think any of you want one of these across the street from your house so why would you not protect the rest of us,” said another resident.

City council has a number of proposals on the table to regulate short-term renters, a list of rules when it comes to things like parking, occupancy, and large parties. The city also suggested requiring conditional use permits in order to rent out your home.

“I feel like I’m on another planet. I’m hearing people describe short-term rentals turning Virginia Beach into Mogadishu, I’m not seeing it,” said another resident.

Those against these regulations were equally loud and clear Tuesday. A large group of homeowners from Sandbridge were in attendance to support what they consider 'a way of life.'

“I think it’s great that we are allowed to rent our homes, that’s the only way that I am able to keep it right now, if I couldn’t rent it out I probably can’t afford it,” said a Sandbridge homeowner.

“My three-day rentals do not represent the end of civilization, they provide lodging to those visitors we are luring to the city to the Sportsplex, the convention center, the marathons,” said another Sandbridge homeowner.

This issue is dividing the neighborhood. Other Sandbridge residents said short-term rentals have got to be stopped.

“Sandbridge cannot, and will not remain a relaxing and peaceful community we advertise it to be,” said another resident.

Tuesday’s meeting was only for public comment. No decision has yet to be made by city council.