More than a dozen people signed up to speak at the Virginia Beach school board meeting to talk about a variety of issues. 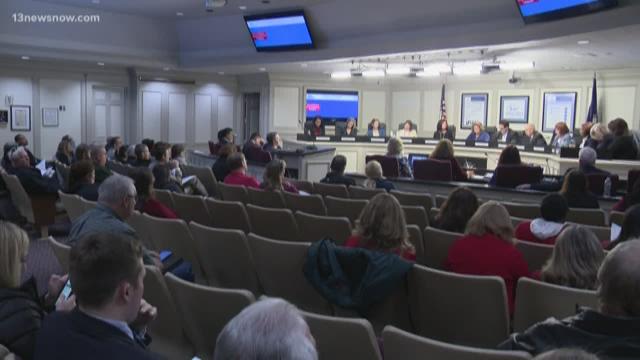 VIRGINIA BEACH, Va. — It was a busy Tuesday night at the Virginia Beach School Board meeting as it was the first meet-up in the new year.

“It’s an exciting time for this school board. It’s a tremendous honor to take on the chair position," Rye said.

After the full agenda, more than a dozen community members showed up to talk about non-agenda items including teacher raises, school safety and Superintendent Dr. Spence’s wife’s political Facebook post.

Earlier this month, Krista Spence wrote that President Donald Trump could "go and F**k himself" in the New Year's Day post. She and Dr. Aaron Spence issued an apology for it.

Several people began sharing a picture of the post on Facebook and other social media platforms. Many criticized Spence. Others supported her right to express her opinion. Her husband, Dr. Aaron Spence, was pulled into the controversy which prompted him to release his own statement on Saturday, January 4.

In the joint statement that the couple put out Wednesday, Krista Spence said:

As his wife, I want to speak directly to our community: While Aaron has been the superintendent for over five years now and is very much the face of Virginia Beach City Public Schools, you very likely have not seen much of me during that time. That is intentional, as we try to maintain a healthy work-life balance at home, so I have devoted my time to our children and my career. These two worlds collided when I posted this message. I do want to be clear: Aaron did not make the post and he did not realize he was being tagged in it.

If Dr. Spence hoped that the public apology about a political Facebook post on his wife’s page was the end of the controversy, it wasn’t.

“His obvious bias is beneath the dignity of an appointed position,” explained a former Virginia Beach City Schools teacher.

About half a dozen people showed up at the meeting to talk about the post, now taken down.

“Whether you like it or not, he is the President of the United States. How dare you put a post outside of this building saying stop bullying when this kind of conduct is allowed,” said a community member.

Some even saying Spence’s and his wife’s joint apology came up short.

A community member said, “Experience tells me it was written by someone who doesn’t care about who they offended, and smacks of arrogance shown by someone who views themselves as very privileged.”

Some speakers spoke in support of Spence, saying his apology was enough and the board need to move on and focus on more important topics.

"I voted for President Trump. This apology is enough for me,” one of the speakers said.

Spence’s daughter’s boyfriend also spoke in support, saying he and Spence have a father/son relationship.

“Even as an open Trump supporter in their home, I have never once felt unwelcome."

Spence had no comment after the speakers. The newly elected board chair, Carolyn Rye, said they will talk about the post in a closed session.

Several other speakers also talked about making schools safer. A father of an elementary school student told the board that his son’s school recently went on lockdown and there were no police at the school. He worries what would happen if someone would bring a weapon in the school.

Tim Anderson is proposing to arm the crisis response team and send them to a Sheriff Academy, possibly during the summer months.

“It would be an auxiliary sheriff academy that every school crisis team member would have the option to go to,” he explained.

Many people agreed with his proposal and said this was a good way of keeping Virginia Beach City Public School students safe.

Rye said school board members could discuss this topic during a workshop. She said she envisions that as a perfect opportunity to talk about changes coming to school safety.

“These concerns don’t go away, they are always there, and I totally emphasize with parents. We want to ensure parents we do have confidence in our schools and what we have now."