13News Now Anchor David Alan sits down with Mayor Bobby Dyer to talk about how the city is trying to heal and the unanswered questions that remain. 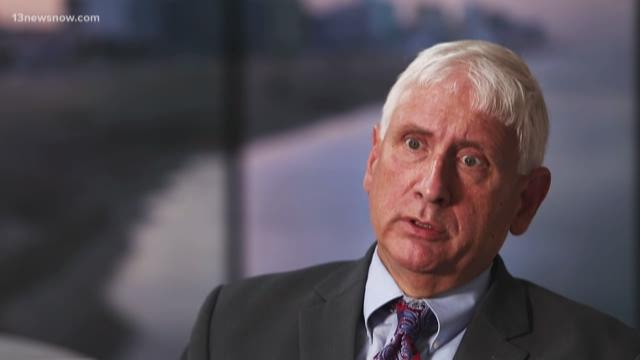 Who can forget where they were four weeks ago as a gunman was roaming the halls of Building 2 at the Municipal Center in Virginia Beach, taking down co-workers in his way.

In a matter of minutes, gunshots turn Building 2 into a war zone. Four brave police officers rush into the building to try and take down a long-time city worker who is firing at will. Co-workers are sent scrambling, barricading doors and looking for any place to hide.

The shooting has changed us in so many ways. We may feel less secure. We may hug our kids tighter. We may greet strangers as friends.

This week, I sat down with Virginia Beach Mayor Bobby Dyer to talk about how the city is trying to heal and the unanswered questions that have surfaced about the shooter and the investigation.

"Oh my goodness, we have a tragedy here," Mayor Dyer told me, remembering the drive to the Municipal Center that Friday afternoon. The death toll was rising with each update he received. "A couple minutes later I got another call. We were up to six."

In all, 12 people were killed, four others were critically wounded, and a building full of dedicated city workers were traumatized.

"The darkest day of my life and in the history of Virginia Beach," Dyer told me, adding the city still has a long way to go to heal.

If there is a light in this tragedy, Dyer said, it's been the overwhelmingly positive response of the community coming together in so many ways to care for the victims and their families.

The shooting will not define Virginia Beach, the mayor insists.

"If I can emphasize one thing right here, this incident is an anomaly. This does not happen in Virginia Beach," Dyer said, defending the fact the city is still the safest of its size in the country.

Now a month after the shooting, as mementos left at the makeshift memorial weather and memories of memorial services fade, there is growing frustration among victims' families who wonder if they'll ever know for sure what really happened inside Building 2 that day.

Defending criticism that the city has not been transparent as the investigation continues, Dyer said, "I know it's frustrating for people. People want answers. We all want answers, but right now this is such a complicated crime scene with a lot of moving facets."

Among the questions: the gunman's work history, passed off by the city hours after the shooting as just 'satisfactory.' Mayor Dyer admitting there were in fact issues with Dewayne Craddock's job performance as so many inside the building have said.

"From what I understand, yes, Dyer said.

As for security in the aging building and whether door locks kept police from getting to the shooter sooner, Dyer said that will be left to investigators to determine.

"In hindsight, you can always try to do things better. But the fact is they got into the building quickly, it was a big building, it was a complex floor layout, but given the situation, police got in there and responded quickly," the mayor added.

And those for calls for an independent investigation, the mayor told me another set of eyes on this.

"We want to let the police do their jobs first, and be assured that we will do whatever is necessary to have the public confidence that we did the right thing for the people," Dyer promised.

The mayor said putting out information piece-by-piece without context will not give a complete picture of what really happened in Building 2. Investigators still have a lot of ground to cover and that will take time.

In the meantime, Dyer said victims' families should not feel forgotten.

"Going forward we have to make sure we don't just make this a two-week, two-month, two-year thing. But that we keep them in our thoughts and prayers and in the family of Virginia Beach."

Mayor Dyer told me the independent investigation into the shooting at the Municipal Center could start by August 1.