In an investigation update, the Virginia Beach Police Department revealed some background information on the municipal center shooter and how some described him. 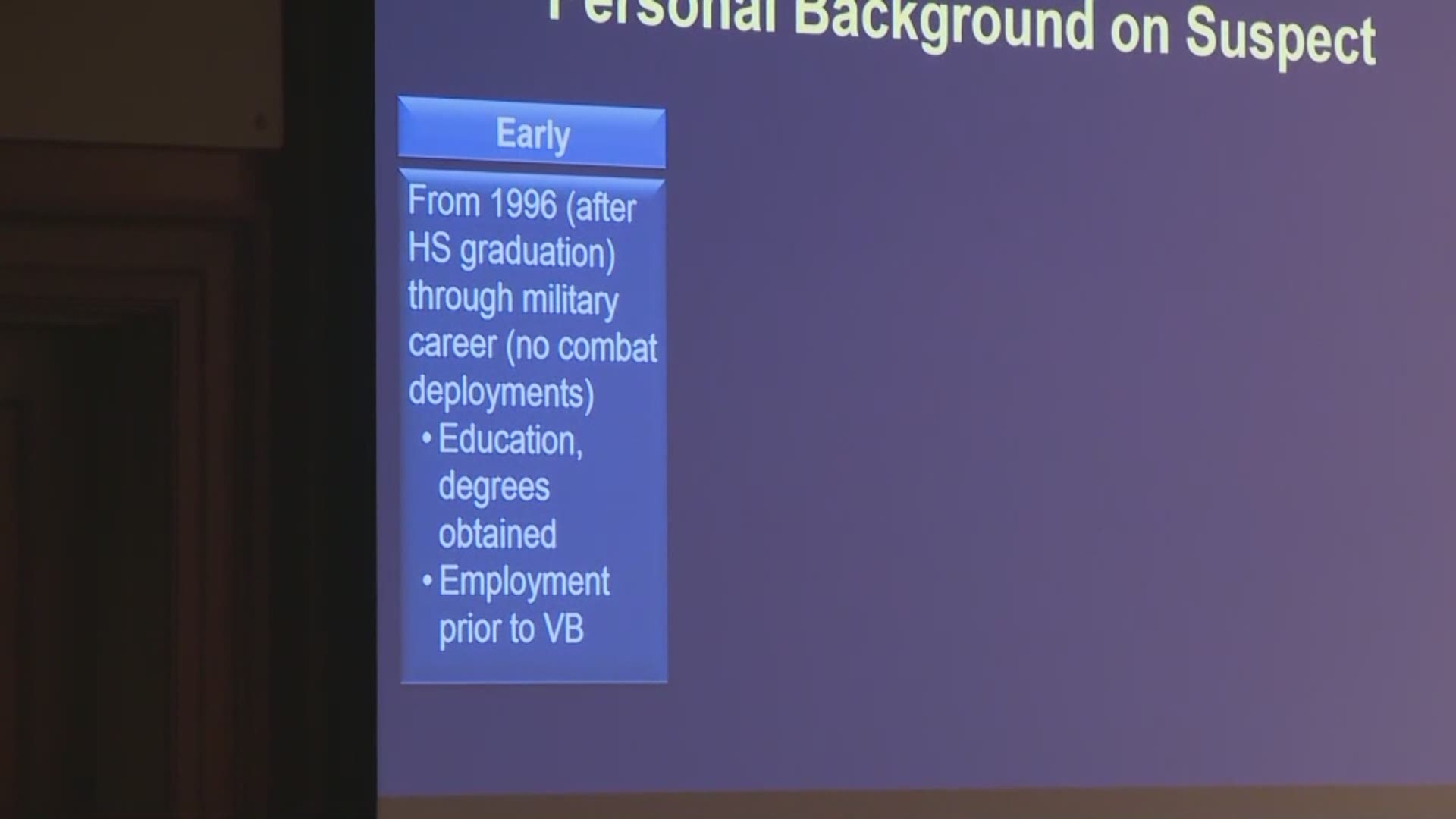 VIRGINIA BEACH, Va. — Tuesday night, the Virginia Beach Police Department gave an update on its investigation into the mass shooting at the municipal center on May 31.

Tuesday, September 24 marked the 116th day into the criminal investigation into the shooting at the municipal center. The department said there's still another six to nine months before the investigation is complete, but an update was given.

Part of that update included some background information on the shooter and what they've discovered about the "why" so far.

Police looked into the shooter's personal background. They went as far back as 1996 after he graduated high school through his military career and his employment before the city of Virginia Beach.

They looked into his education and the degrees he obtained.

The investigation showed that throughout his military career he had no combat deployments.

Another part of the investigation into the shooter was his family and social background. Police interviewed family members and friends and looked into his hobbies.

After 2017, his family said he became isolated and described him as “introverted, paranoid and uncomfortable around people.”

The shooter ordered a bulletproof vest, or body armor, in April 2019, but it wasn't delivered until May 31.

As far as his work history with the city, the shooter was hired in February 2010 in an Engineer II position. In August 2011 he progressed to Engineer III. Between 2019 and 2016 his evaluations stated that he "met performance standards."

In 2017, his evaluation showed that he "met performance standards," but he was placed on and completed a Performance Improvement Plan.

In 2018, his evaluation showed that "improvement was required." His immediate supervisor gave him a written reprimand for performance issues.

"I also want to point out that his immediate supervisor was not in Building 2 when his rampage began," said Deputy Chief Patrick Gallagher.

He was expected to achieve a "satisfactory performance evaluation" in 2019. Police did not find any applications or interviews for promotions or transfers in the system.

The police said he had some friendly relationships with co-workers. Some described him as a "guiet, polite, nice guy and a good listener."

But, shortly before the shooting at the end of May 2019 an issue was brought up with the shooter and Virginia Beach City's purchasing department. His first-line supervisor and mid-level supervisor supported him in the conflict.

"So he did have support from his leadership in his department," explained Deputy Chief Gallagher.

On May 31, he did submit a "professional, respectful" two weeks' notice of resignation that was described by Deputy Chief Gallagher as "not unlike many other resignations that we receive." He noted it was for personal reasons.

RELATED: Official: Gunman's resignation email had no sign of shooting

In looking at his workplace encounters, there were no documented threatening encounters or physical contact between the shooter and his co-workers in the workplace.

In fact, in looking at workplace violence indicators, police found no evidence of pre-attack indicators or assaultive behaviors. They also did not find any known mental health treatment.

The background investigation did not reveal any social media accounts, affiliations with other groups, a manifesto, personal emails or paper documents regarding violence, nor were there police reports showing a history of domestic violence.

The shooter had a total of $20,000 in his bank account, no credit card debt, no doctor visits in the last two years and no prescription medication for the last two years revealing there were no physical health or financial stressors.

The police found no evidence to support the theory of a second shooter or an accomplice that had knowledge of the attack or played any role before, during or after the shooting on May 31.

There were rumors of a former employee being involved. That employee was fully investigated and police followed up on all leads and he was cleared of any involvement in the shooting.

Police are still investigating a motive, but they haven't identified the "why" of the attack.

The shooter shot people he knew and didn't know, he didn't shoot some people that he had the opportunity to shoot. There were people the shooter could have shot but didn't.

His victims were all over demographically as well. He shot six women, five were white and one was Black, and 10 men, seven were white and three were Black.