VDOT officials are urging drivers to move over or slow down when passing an emergency vehicle on the side of the road. 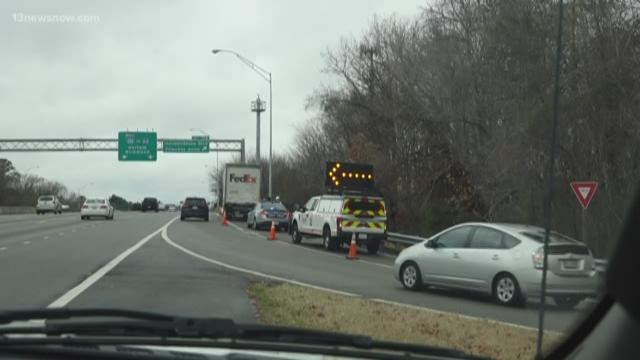 VIRGINIA BEACH, Va. — Virginia Department of Transportation officials are reminding people to move over and slow down when an emergency vehicle is on the side of the road.

This comes after police said a car hit a VDOT truck on Monday morning. Investigators say a 2017 black Lexus driven by Cordell Anthony Livingston drove into the rear of the truck at a high rate of speed.

Livingston reportedly got out of his car and fled the scene on foot. He was found a short time later and taken to Sentara Norfolk General Hospital to be treated for non-life-threatening injuries.

On Monday, 13News Now tagged along with long-time VDOT contractor, Ronnell Colon. He’s worked as a contractor for the past 14 years.

"Every day is something different. Every person that you meet has a funny story," he said.

From flat tires to providing some gas, Colon is there to keep drivers safe. He said he loves his job, although sometimes he worries about his safety.

Over the past couple of months, officials said drivers are not paying attention and breaking the law. People are not moving over or slowing down for emergency vehicles on the side of the road.

In July 2019, legislation passed that would increase the punishment for drivers who violated the law. The old law said the first offense is a traffic infraction punishable by a fine of no more than $250, and a second offense is punishable as a Class 1 misdemeanor.

The new law would make all offenses reckless driving, which is a Class 1 misdemeanor.

"We are a target. It's really a dangerous job,” Colon explained.

All Colon asks is for people to remember those working on the road are human beings. He begs you to move over or slow down when you see them, so they too can get home to their loved ones.

"I pray every morning for my shift and other shifts as well," he said.