Crews rushed to pretreat roads on Saturday. Now, they're prepared to work around the clock to clear roads once the storm hits. 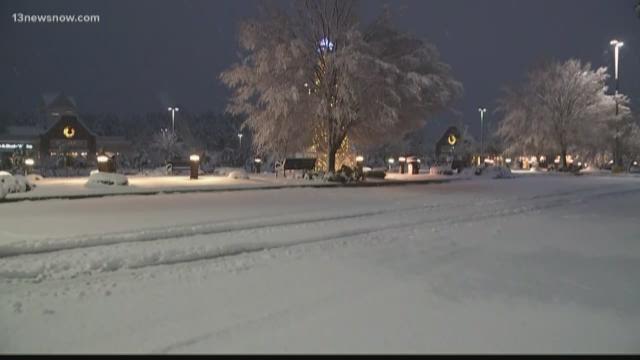 HAMPTON ROADS, Va. — It was a busy Saturday for the Virginia Department of Transportation.

Crews began pre-treating roads early in the morning ahead of an early winter storm that has threatened Virginia and North Carolina as it sweeps toward the east.

The Hampton Roads Division of VDOT pre-treated all major roads in Franklin, Va., and Interstate 64 in York County and James City County.

Throughout the Hampton Roads region, VDOT has more than 400 pieces of equipment, including snow plows and other vehicles.

Dave Forster, a spokesperson for VDOT, said staff in Franklin are working 24 hours in order to monitor the storm and respond.

But even with all of its available resources, VDOT is urging motorists to avoid driving during the storm.

“We're urging motorists…if and when this hits, to stay off the roads if they don't need to be out there and to give plows and trucks extra space," said Forster.

need. Three teams will be on standby, ready for dispatch to help the hardest-hit areas of Virginia.

On Saturday evening, Bobby Myles, a truck driver from Mississippi was resting in his truck, bracing to potentially face the storm tomorrow evening. He has to drive through North Carolina tomorrow evening.

“I just called our customers and let them know we’re being detained by the bad weather,” said Myles.

“If the roads get bad enough, we'll have to pull over.”

From North Carolina, he will head to Florida, then back home to Mississippi. The storm could impact his next couple of weeks on the road.

“I’m hoping I don't get delayed, trying to get home for Christmas,” said Myles.

Once the storm hits, VDOT crews will begin working around the clock to clear roads. They’ll begin by clearing interstates and primary roads first, then major secondary roads and subdivision streets.

Its goal is to have all roads passable within 48 hours after the storm.