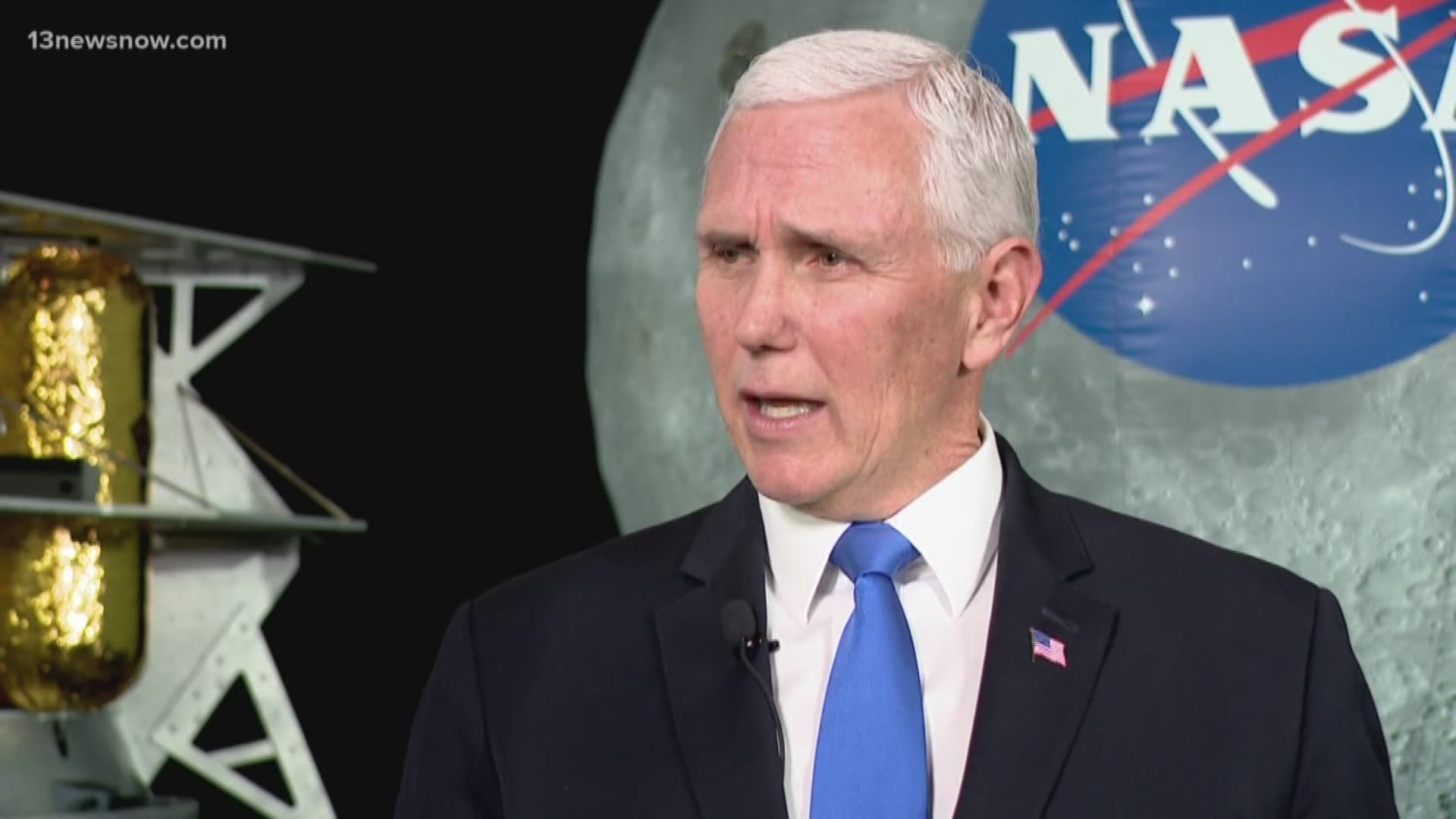 The vice president took a tour of NASA Langley where he also spoke to a crowd of employees.

Pence said new technologies created under NASA Langley Research Center's Artemis program will help put the next man and first woman on the moon in 2024.

"When you think of 100 years, the brilliant minds here at Langley have come up with the technologies, methods and the theories that have made it possible for us to lead in space," Pence said.

Pence got to see those innovations firsthand. He toured the center alongside U.S. Secretary of Education Betsy DeVos.

"Our guests were able to immerse themselves in what it will take to realize Artemis," said Langley Research Center Director Clayton Turner. "From arrival to precision landing, to working and living."

Pence's schedule included a visit to Hampton University's Proton Therapy Institute to highlight the university's efforts in providing state-of-the-art cancer research and treatment and a roundtable with HU students.

Secretary of Education Betsy DeVos joined the Vice President on a tour of the facility, then in a round table discussion with Hampton University President Dr. William Harvey, students and staff.

Pence talked about a renewed investment in HBCU’s.

“Dr. Harvey you play a leading role, including when the President of the United States signed a measure to make federal funding for HBCU's permanent,” Pence said.

The Secretary of Education echoed his words.

“One of the first things we did was restore and return year-round PEL, recognizing that most students are not what would be considered traditional, and we need to meet students where they area,” DeVos said.

The Vice President also met a few cancer survivors who received treatment at the Proton Therapy Institute, including a retired Navy SEAL, a commander of a Navy destroyer and a local high school student, like Kaylah Barney.

Doctors diagnosed Barney with Stage 1 brain cancer in 2017, Ependymoma. She was in 8th grade at the time.

“It was very difficult to have something change your life in a matter of seconds, I was perfectly healthy then I wasn't,” Barney said.

For two months, Barney spent every day at the Proton Therapy Institute. Today, 17-year-old has a lot to smile about. Not only did she meet the vice president, she’s two years cancer free.

“I remember him (Pence) saying I was remarkable which was touching to me,” Barney said. “I want people to never take life for granted because everything can change in seconds, be grateful for everything you have.”

The Virginia Beach leg of the visit was to feature a conversation with Naval Special Warfare Operators.

Pence was in Virginia Beach last November for a Get Out the Vote rally just before the Virginia state office elections.