Christina Maenza's parents are grateful for support and contributions to her Go Fund Me page. 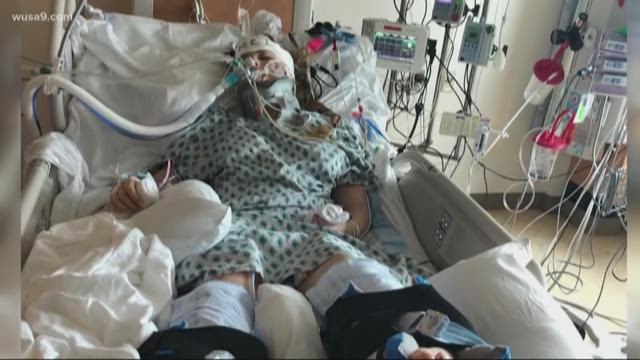 FALLS CHURCH, Va. — A teenage girl is giving her family new signs of hope as she fights for her life following a devastating car crash.

Christina Maenza, 16, of Prince William County, was driving her father's car on her way home from the gym on May 2 in Fauquier County. Her father, Bill Maenza, noticed she was late getting home and looked her cell phone up on a GPS app. He saw she was at an intersection, not moving.

"You hoped her car stalled or something like that," said Maenza. He drove to the Route 29 intersection in Bealeton, Virginia.

"It was pretty scary, first you see there's a lot of ambulance vehicles there... All of a sudden I noticed it was my vehicle. And my daughter wasn't in the vehicle. It was pretty terrifying," said Maenza.

His Toyota Corolla was mangled. The Fauquier Co. Sheriff's Office says it appears Christina pulled out into traffic and was T-boned by an F-150 pickup truck. By the time her dad arrived, Christina was gone. A deputy told Bill and his wife, Christine, that their daughter had been airlifted to Inova Fairfax Hospital.

"I asked, 'Is she alive?' He just said she was breathing. That gave me a little bit of hope. But it that was the most terrifying moment of my life," Christine Maenza said.

They couple rushed to the hospital, not sure what awaited them.

"I remember there was a security guard who must have been an angel because he was praying and said, 'She's going to be okay,'" Christine said. The guard then took her hands and prayed with her.

The Maenza's first glimpses of Christina were scary. They realized she was breathing because she was on a ventilator. She was also in a medically-induced coma. She had a collapsed lung, a broken pelvis and hip, a bladder laceration, and, worst of all, a traumatic brain injury.

Those first few days were touch and go. While doctors repaired Christina's physical injuries, they worried about the damage to her brain, and wondered if she was still there.

Christina is the second-youngest child in a family of five kids. Within days of the crash, she started giving her family members a few signs of hope that she would come back to them.

"Her opening her eyes for the first time. Being able to give a slight thumbs up or wiggle her toes... we know she hears every word," said Bill.  They are still waiting for her to speak.

Family members are holding vigil by Christina's side, reading Bible verses and words of encouragement sent by so many people, even strangers. A Go Fund Me account set up by their older son has already reached close to $23,000 on Friday. That mone $40,000. They appreciate all donations.

"I am so overwhelmed with the responses, the kindness, the support from people we know, people we don't know. The community. It amazes me how wonderful people truly are. The good in people. We're blessed," Christina said.

And, there's more good news for Christina: she is scheduled to soon be released from the hospital to a rehab center. They're waiting see which center they've applied to has room.