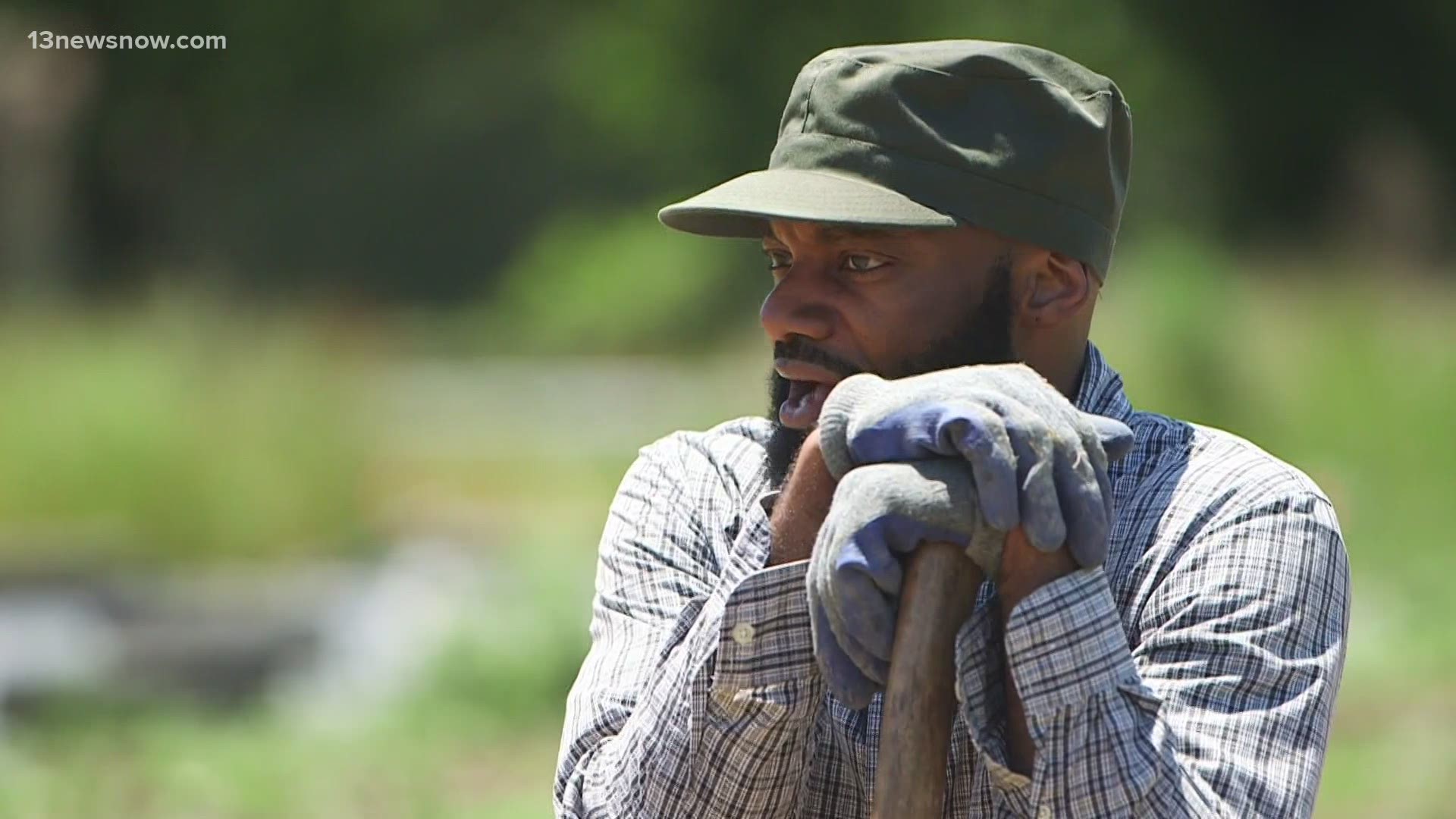 “I do sometimes eat it directly out of the ground without washing it!” farmer Thelonius Cook laughed.

On a sweltering May afternoon, the summer heat beats down on the Mighty Thundercloud Edible Forest, a growing sustainable farm on Virginia’s Eastern Shore. Cook -- a Hampton native -- cultivates his plot of land off Route 13 using only African-American and sustainable farming techniques.

According to the U.S. Department of Agriculture, Cook is one of the more than 48,000 Black farmers that own 4.7 million acres of farmland in the United States based on the 2017 Census of Agriculture. But even that only makes up 0.5 percent of the country’s total.

Of the 3.4 million "producers," Black farmers make up just 1.4 percent of that population.

Cook’s unique methods add to his already unique position as a farmer.

“Can taste the flavor difference, and you can grow different varieties that you can’t find in the store. They're [store-bought produce] grown for longevity, not flavor,” Cook said.

13News Now first met Cook planting seeds for the upcoming 2021 harvest and crops. Years of building up his farmland now lead to a bountiful yield of fruits and vegetables.

Through the COVID pandemic, Cook’s path led him to Ronjeanna Harris, another Hampton Roads native.

“People had a need for cooked meals! A lot of people in hotels that didn’t have stove access, when they did food distributions they couldn’t cook the food,” Harris told 13News Now at Cook’s farm.

Harris started the nonprofit "Jeanna’s iFeed" at the start of the pandemic, when she saw a need to bring healthy and cooked meals to underserved communities and individuals. Harris gets her supplies through a variety of sources, including the Mighty Thundercloud Edible Forest.

“[Cook] will make me aware of what’s ready, what’s in season, and then he donates so many pounds. He’ll ask, 'How many recipients do you have this week, this month?'” Harris said.

According to the organization Feeding America, they anticipate nearly 42 million individuals to experience food insecurity in 2021, a long-term impact from the COVID pandemic. Jeanna’s goal is to make communities and people in need have access to not just food but healthy food, with a big help coming from Cook himself.

“For the type of people I’m serving, it’s important they have the freshest, local produce that’s available to them,” Harris said.

Cook says as his farm grows, so does his desire to help fight food insecurity in Hampton Roads, which is why he’s actively looking at new ways to expand the reach of his farm’s produce.

“The options we have in the Black neighborhoods, aren’t always the healthiest,” Cook said.