Former Virginia Gov. Terry McAuliffe says he won't run for president in 2020 and will instead focus on helping Democrats win in the state. 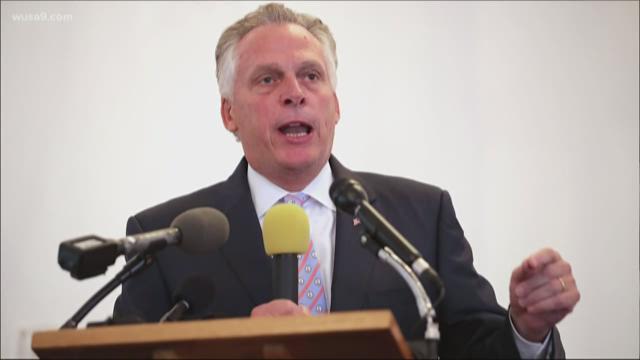 RICHMOND, Va. — Former Virginia Gov. Terry McAuliffe won't run for president in 2020, meaning establishment, centrist Democrats will have one less option in a nominating free-for-all that so far has highlighted the party's leftward shift.

McAuliffe said Wednesday night that instead of joining a crowded Democratic field vying to challenge President Donald Trump, he will concentrate his efforts on helping Democrats win this year in Virginia — with the possibility that he runs for governor or president in the future.

"Where can you help people the most and change people's lives?" McAuliffe said on CNN, arguing that he could "beat Trump like a rented mule" but doesn't "want anyone in Virginia to think I've abandoned them."

"I'm staying home to do what I need to do to help Virginians," he added.

McAuliffe's decision comes as former Vice President Joe Biden considers whether to enter the 2020 Democratic field. McAuliffe is widely viewed as part of the party's mainstream, occupying much of the same political space as Biden.

McAuliffe said "most" of the current Democratic candidates could defeat Trump, though Biden was the only potential contender he called out by name. "I love Joe Biden," he said.

The former governor's decision also follows a series of scandals that weakened Democrats in Virginia during a key election year, when partisan control of the state legislature is up for grabs.

Democratic Gov. Ralph Northam and Attorney General Mark Herring both admitted in February to having worn blackface as young men, while Lt. Gov. Justin Fairfax has been accused by two women of sexual assault, which he denies. Some top Democratic state lawmakers have urged McAuliffe to focus on raising money for Democrats this year and then run for governor in 2021. Virginia bars governors from serving consecutive terms, but McAuliffe could run again after serving from 2014-18.

He demurred on CNN when pressed about whether he'd run for governor in 2021, saying he's committed to Virginia Democrats first and foremost to help this year and in federal elections next year.

"He didn't rule it out," Saslaw told The Associated Press before McAuliffe's CNN appearance.

McAuliffe, once best known as a top Democratic money man and close friend of Bill and Hillary Clinton's, reinvented his image during a largely successful four-year term as governor that saw him tirelessly market the state, make major transportation deals and restore more voting rights than any other governor in the country.

In a presidential race, McAuliffe's record as a business-friendly centrist — he proposed a corporate tax cut and backed a massive new natural gas pipeline that environmentalists detest — would have been a liability with more progressive primary voters.

Yet McAuliffe had made clear to friends and associates that he believed he'd make a good candidate and an excellent president. He's been open about his belief that Democrats should not stray too far to the left, particularly on health care and other economic issues. He sees himself as a politician in line with the party's positions on social issues while representing a mainstream liberalism that could appeal to more moderate voters.

According to aides, McAuliffe had spent the last several weeks meeting with policy advisers talking about how to make concrete economic and health care proposals that could appeal across the political spectrum but that would stop short of Sanders' pitch for single-payer health insurance. Among those he met with was Chris Jennings, a top health care policy adviser in President Barack Obama's White House when the Affordable Care Act was passed and implemented.

Part of McAuliffe's pitch to powerbrokers in early voting states was his ability to make Democratic inroads in Virginia, which has become reliably Democratic in recent elections. In the 2017 elections, the last year of McAuliffe's four-year tenure as governor, 15 House of Delegates seats shifted from Republican to Democratic control, reducing the GOP's majority to two seats.

"I took a red state and made it blue," the former Democratic National Committee chairman said last month during a swing through South Carolina. "We had the biggest pickups in 140 years under my four years as governor, and if we did it there, we can do it here in South Carolina."

McAuliffe stepped into the national spotlight as governor as a leading voice on certain social issues, winning kudos for undoing a vestige of the state's Jim Crow era and restoring voting and other civil rights to felons who have completed their sentences. McAuliffe's blunt criticism of the white nationalists who sparked a deadly rally in Charlottesville last summer also drew a sharp contrast with Trump's shaky response.

Trump gave $25,000 to McAuliffe's 2009 gubernatorial bid, and the two were once acquaintances. But McAuliffe has been unsparing in his criticism of the president in the last year or so, telling a national television audience he'd knock Trump to the floor if the president ever tried to intimidate him.

Another factor in McAuliffe's decision is the dissipating shadow of the Clintons in Democratic presidential politics. McAuliffe has been friends with the couple for more than 30 years and served as DNC chairman during part of Bill Clinton's tenure. McAuliffe has been unapologetic about his ties with the Clintons and his years as a party money man for them and other candidates, saying he has always worked within the existing campaign finance rules to elect Democrats up and down the ballot, even as he acknowledges that big money — particularly from corporations and super PACs — has become anathema to many in the Democratic base.