Gerald Baliles, who served as governor of Virginia from 1986 to 1990, passed away after a long battle with kidney cancer. He was 79. 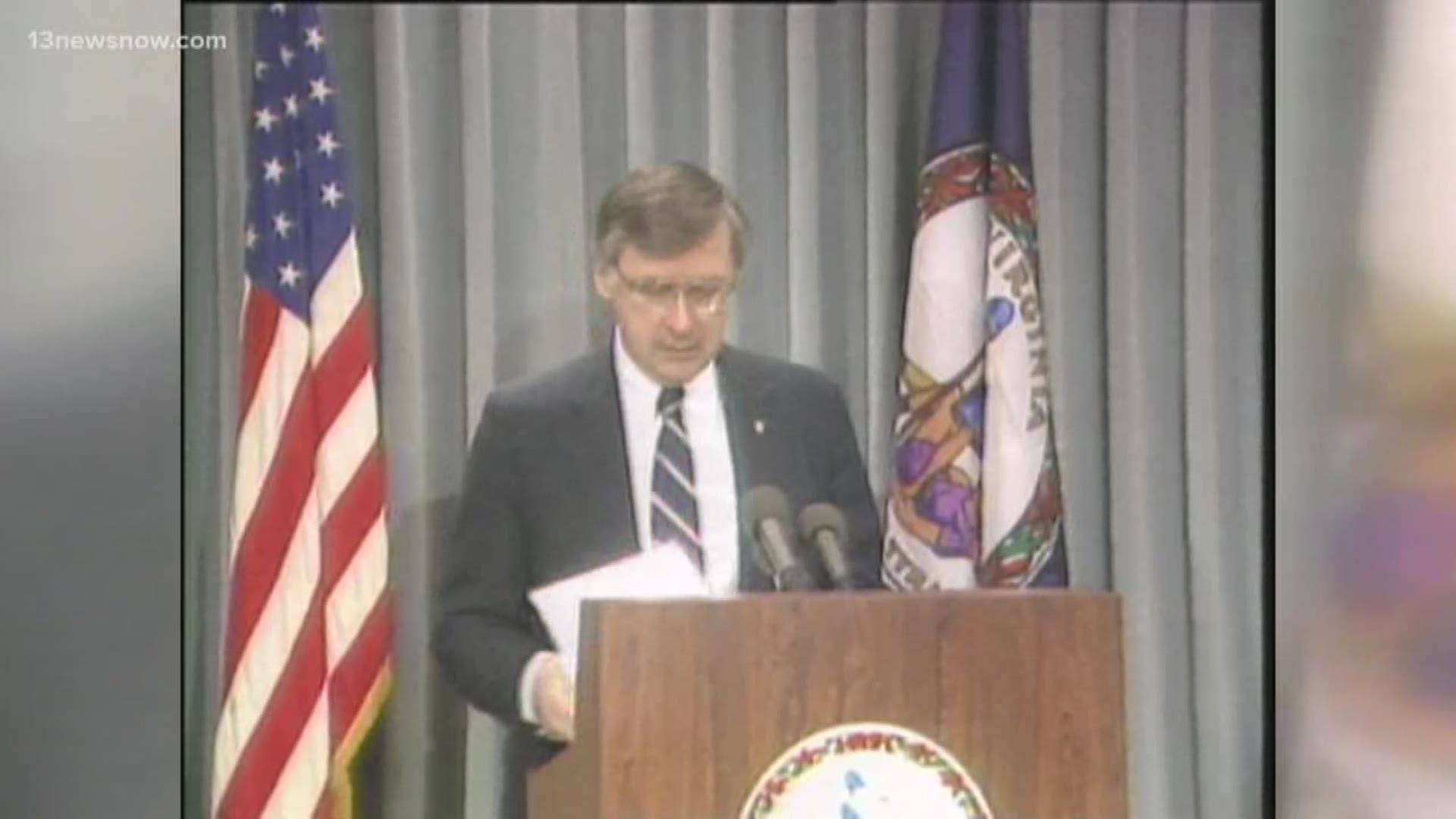 VIRGINIA, USA — Former Governor Gerald Baliles passed away Tuesday morning according to the office of Governor Ralph Northam who issued a statement from the Baliles' family.

Baliles served as the governor of Virginia from 1986 to 1990. He has a long history of working with state politics and made local impacts, as well.

He entered a specialized cancer treatment program in September for complications that arose during his ongoing battle with kidney cancer.

Baliles' family said that he had been fighting renal cell carcinoma for several years. According to the statement from Northam's office, he was surrounded by his family at the time of his passing. Funeral arrangements have yet to be made.

The Democrat was known as the "transportation governor" and for his work to clean up the Chesapeake Bay and increase foreign trade.

Baliles kept up the fight for better transportation long after he left the Executive Mansion, calling for Virginia to install tolls on interstates to raise money for transportation projects.

He served in the Virginia House of Delegates from 1976 to 1982 and was state attorney general from 1982 to 1985 before running for governor.

During his time as governor, Baliles pushed through a 10-year, $10 billion transportation initiative during the first year of his administration that required increases in the gas and sales taxes.

Gov. Ralph Northam, alongside other state lawmakers and politicians, passed on his condolences.

“I am deeply sorry to hear of the passing of Governor Gerald Baliles.

“As the 65th Governor of Virginia, he understood and valued the role government can play in improving citizens’ lives. He transformed Virginia’s transportation infrastructure, signed Virginia into the Chesapeake Bay agreement under which we still operate today, and focused on expanding access to higher education, among many other accomplishments.

“Governor Baliles fought for rural Virginians, promoted civil discourse, and was the epitome of a true public servant.

“While his accomplishments in office were, and remain, impressive, I will miss him for the kind ear and the sound advice he was always willing to give to me. Pam and I send our deepest sympathies to his wife, children, and loved ones.

“I have directed that Virginia state flags be flown at half-staff in Governor Baliles’ honor for the next 30 days."

“In his four years as Governor, Gerald Baliles was a steady hand steering the Commonwealth, making important investments in transportation that Virginians are still benefiting from today.

“He was also a good friend. I join all Virginians in celebrating his service to the Commonwealth. We will miss him.”

Senator Tim Kaine made a statement on Baliles' hard work and dedication towards the growth and well-being of Virginia:

“Governor Baliles modernized our roads, pushed environmental policies that understood economic growth and conservation go hand-in-hand, and led unprecedented international missions that laid the groundwork for Virginia to become the global trade hub it is today. Given the decades of Virginia prosperity, these initiatives have enabled, it would not be hyperbole to say Jerry was one of the Commonwealth’s most accomplished governors of the twentieth century. After leaving office, he continued to donate his intellect, vision, and work ethic for the public good. I’ll always remember the advice he gave me as head of the UVA Miller Center and the support he provided in cleaning up the Chesapeake Bay. My condolences go out to the Baliles family and all Virginians who, like me, are saddened by his passing."

“Governor Baliles was a leader in the early fight to save the Chesapeake Bay. The partnership he forged with the other Bay states provided the foundation for Bay restoration efforts. That foundation, which continues today, is our best hope to leave a legacy of clean water for our children and grandchildren.

“We’re grateful for Governor Baliles’ many contributions to the Bay and saddened by his passing.”

“I was saddened to learn of the passing of my friend and our former governor, Gerald Baliles. As the Commonwealth’s 65th governor, Jerry governed with a calm, yet passionate demeanor that allowed him to secure historic investments in transportation, education and the clean-up of the Chesapeake Bay. While I was proud to support his initiatives while serving in the Senate of Virginia, I will always fondly remember our service together in the House of Delegates. Our Commonwealth has lost one of its greatest governors and public servants. I offer my condolences to his wife Robin, his family and loved ones.”

"I knew Governor Baliles from our time as law school classmates at the University of Virginia, and I am deeply saddened by his passing.

Governor Baliles leaves behind a legacy of accomplishment and distinction. He was, quite simply, a very good Governor. Cessie and I send our deepest condolences to his family during their time of grief."