The Commonwealth is taking action to keep human traffickers in jail and better protect trafficking victims. 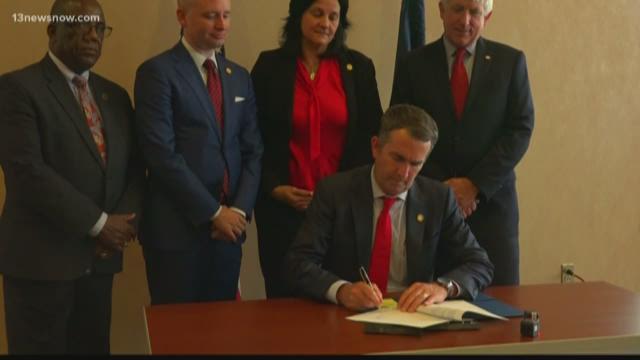 On Monday, Governor Ralph Northam signed a bill that would deny bond for people accused of certain trafficking offenses. He signed it inside the Norfolk Police Department building. Human Trafficking crimes include offenses ranging from forced prostitution to forced labor.

That's why Governor Northam is tightening the rules on human trafficking crimes.

By signing the bill, Governor Ralph Northam sent a big message to prevent human traffickers from getting out on bond. He's signing a bill so traffickers can't get out on bond in hopes of setting a nationwide trend.

"It's all about public awareness often times things will occur in one state, and then other states will follow suit. So, we certainly hope that will happen,” said Northam.

He's supported by an entire community, in Hampton Roads including the Hampton Roads Human Trafficking Task Force. That’s a task force funded through a grant from Attorney General Mark Herring.

Delegate Michael Mullin sponsored this bill. He said the cycle works like this, the trafficker is arrested, gets out on bond, and pulls the victim back into this form of modern-day slavery, but this bill cuts off the cycle.

"We didn't want that cycle of abuse to continue,” said Mullin.

It's meant to help police keep the community safer, and give trafficking victims help.

"It gives us the ability to make sure that we're providing adequate services to the victim,” said Chesapeake Police Chief, Kelvin Wright.

Victims like Arlington resident, Barbara Amaya said she wants all survivors to know help exists in the community.

"It really shows to me that there's a paradigm shift, a mind shift,” said Amaya. "It gives all survivors of human trafficking hope. That perhaps something is being done."

Signs of human trafficking that you can look out for include: signs of physical abuse, malnutrition, submissive behavior, and a lack of control over money or cell phone.