One arrested during Richmond gun rights rally for wearing a mask

Of the 22,000 in attendance at the Capitol Square gun rights rally, one person was arrested for wearing a mask in public. 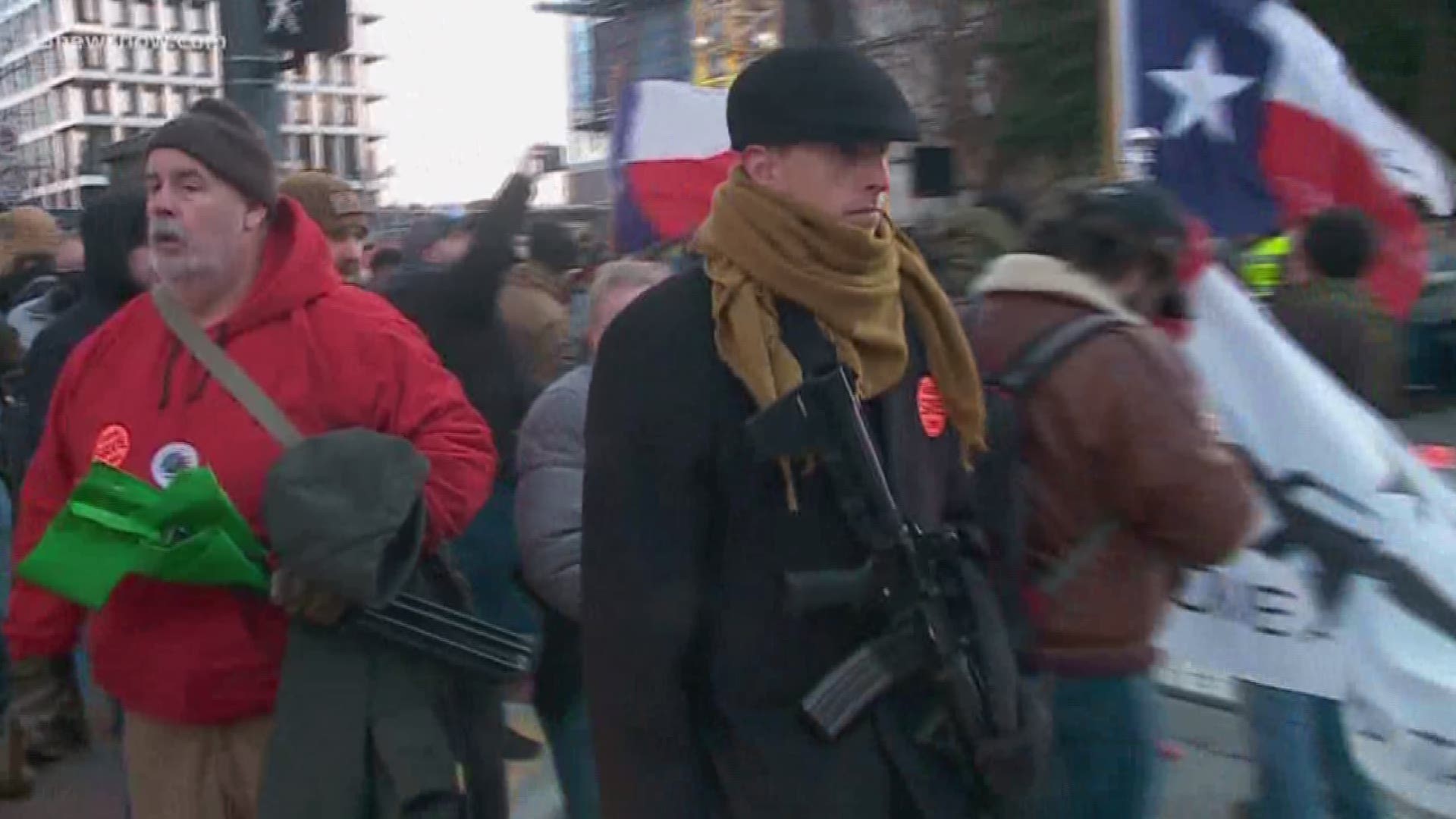 RICHMOND, Va. — Out of the 22,000 people who attended the "Lobby Day" gun rights rally in Richmond, one person was arrested.

The Virginia Capitol posted on Facebook claiming 21-year-old Mikaela E. Beschler was arrested around 1:30 p.m. on Monday. She was charged with one felony count of wearing a mask in public in the 800 block of East Broad Street.

Officials said the arrest happened after an officer saw Beschler for a third time with a bandanna covering her face. He had repeatedly warned her on two separate occasions to adjust the bandanna.

Beschler was released on her recognizance.

Credit: VACapitol2020
Mikaela E. Beschler was arrested for one felony count of wearing a mask in public during Monday's gun-rights rally in Richmond.

Gun rights activists and other groups were in Richmond to protest Democrats' plans to pass gun-control legislation.

The activists have been angry over the state's new Democratic majority leadership, and its plans to enact a slew of gun restrictions.

Second Amendment groups identified Virginia as a rallying point for the fight against what they see as a national erosion of gun rights.

During the event, hundreds of demonstrators carried guns outside the rally area -- many of which were military-grade -- while unarmed demonstrators walked Capitol grounds carrying signs and chanting.

The event kicked off at 11 a.m, which hundreds of protestors arriving hours early. The Virginia Capitol claimed that the entire Capitol Square was cleared out by 2 p.m.

The Virginia Capitol tweeted that there were 22,000 people involved in the rally. There were 6,000 individuals on Capitol Square and about 16,000 outside the gates.

Before the Lobby Day rally, Governor Ralph Northam issued a State of Emergency, banning all weapons from the capitol grounds after receiving word of credible threats of violence. The weapons ban lasts until 5 p.m. Tuesday but doesn't affect streets outside of the capitol grounds.

After the event, Governor Ralph Northam released the following statement;

"We are all thankful that today passed without incident. The teams successfully de-escalated what could have been a volatile situation. This resulted from weeks of planning and extensive cooperation among state, local, and federal partners in Virginia and beyond.

Virginia’s law enforcement and first responders demonstrated tremendous professionalism. I’m proud of their work. I have spoken with Colonel Settle of the State Police, Colonel Pike of the Capitol Police, and Chief Smith of the Richmond Police Department, as well as leaders of the FBI and the U.S. Attorney’s office, and thanked them for keeping Virginia safe.

Thousands of people came to Richmond to make their voices heard. Today showed that when people disagree, they can do so peacefully. The issues before us evoke strong emotions, and progress is often difficult. I will continue to listen to the voices of Virginians, and I will continue to do everything in my power to keep our Commonwealth safe."

1 / 14
Evan Watson, 13News Now
Thousands of people crowded the capital of Richmond for Lobby Day in Virginia on Jan. 20, 2020. At the center of demonstrations were gun rights and gun control.