The GOP adjourned a special session without considering Democrats' request to vote on a series of gun control measures. The session lasted less than two hours. 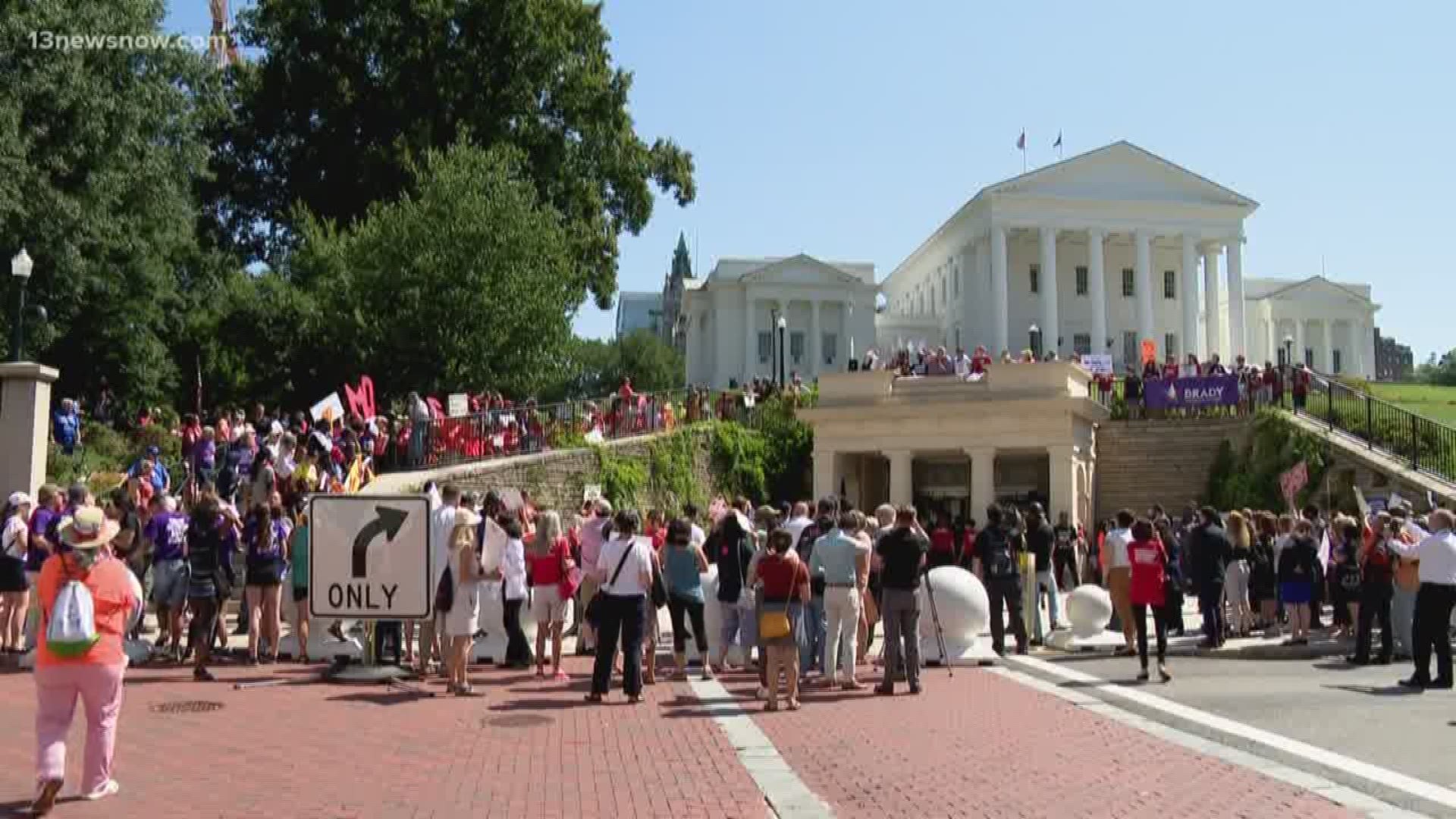 Richmond, Va. (AP) -- The Virginia General Assembly has voted to adjourn until November, as Republicans rejected Democrats' request to vote on a series of gun control measures.

The special session on gun violence got off to a chaotic start Tuesday before ending the same day.

Democratic Gov. Ralph Northam called the special session in response to the May 31 mass shooting in Virginia Beach in which a city employee killed a dozen people.

Republican leaders say the state's crime commission needs to take a measured look at gun issues to try to find a bipartisan solution.

House Speaker Kirk Cox says the special session was premature because the Virginia Beach shooting is still being investigated.

Cox and Senate Majority Leader Tommy Norment say Northam should have called for a blue-ribbon commission to study gun and mental health issues like former Gov. Tim Kaine did after the 2007 Virginia Tech massacre.

RICHMOND, Va. (AP) — Virginia's governor led gun-control supporters in chants of "Enough is Enough!" outside the Capitol Tuesday after summoning legislators to debate and vote on new gun laws.

Gov. Ralph Northam ordered lawmakers back for a special session to consider a wide range of gun-control measures, said people need "votes and laws, not thoughts and prayers" after a Virginia Beach employee shot and killed a dozen people in a city building on May 31.

GOP lawmakers criticized Northam as trying to exploit the tragedy for political gain in the lead up to Tuesday's session. Republican leaders who control both houses of the legislature signaled they wouldn't pass gun controls, focusing instead on increasing criminal penalties after gun crimes.

Senate Majority Leader Tommy Norment filed surprise legislation Monday to broadly ban guns in any government building, but even that faced uncertain passage in the House, and it prompted a mutiny in the GOP caucus, with Sen. Bill Stanley resigning as majority whip shortly before lawmakers were to be gaveled into session.

Stanley told The Associated Press that he was quitting to protest the move by Norment, who is married to a lobbyist for the city of Virginia Beach. His bill caught his fellow Republicans off guard and they immediately pushed back, saying it's an infringement on the rights of law-abiding citizens to prevent them from carrying guns into government buildings.

"Sometimes you just gotta stand for principle, so I resigned," Stanley said.

But his departure didn't last long as GOP leaders sought to restore unity: Stanley said that during a Senate caucus meeting before the session started, Norment apologized for the bill and asked Stanley to reconsider. Norment made a motion to the caucus to reelect Stanley as whip, which they did. Stanley said he was the sole vote against.

Facing such stiff resistance from his own party, Norment on Tuesday afternoon issued a statement saying he will ask that Senate Bill 4013 be stricken in committee, because "as currently drafted, the legislation represents neither my views nor my intention."

He said he won't support "any measure that restricts the constitutional rights of law-abiding citizens."

Outside the Capitol building, advocates for and against gun control rallied just ahead of the session.

Gun-control supporters began their demonstration on Capitol Square by reading out the names of the state's recent gun violence victims, including those in Virginia Beach. Northam then led them in the "Enough is Enough!" chant that has become a refrain against gun violence at rallies nationwide in the wake of repeated mass shootings. Others carried signs decrying the killings of children, and shouted "You vote today, we vote in November."

Across the Capitol lawn, a smaller group of gun rights advocates rallied. They said many others were inside meeting with lawmakers and that a larger rally was planned Tuesday afternoon.

Some gun-rights advocates were walking around inside the Capitol with handguns in holsters openly visible, which is permitted. Visitors to the House gallery can keep their guns, and while they're not permitted on the Senate side, some lawmakers bring guns with them onto the floor.

Jim Snyder, a 69-year-old gun owner from northern Virginia, said the Virginia Beach shooting hadn't moved the needle on gun issues for him one bit.

"I haven't done anything wrong and they want to take guns away from me," Snyder, vice president of the Virginia Citizens Defense League.

Snyder speculated that Northam called the special session to divert attention from the scandal he faced over a racist yearbook photo, or to motivate Democrats hoping to retake control of the legislature in November. Some people carried poster-sized signs of the photo that appeared on Northam's yearbook page decades ago, showing one person wearing blackface and another the robe and cap of the Ku Klux Klan.