The Fairfax County Health Department is conducting an investigation at the Greenspring Assisted Living facility following the outbreak. 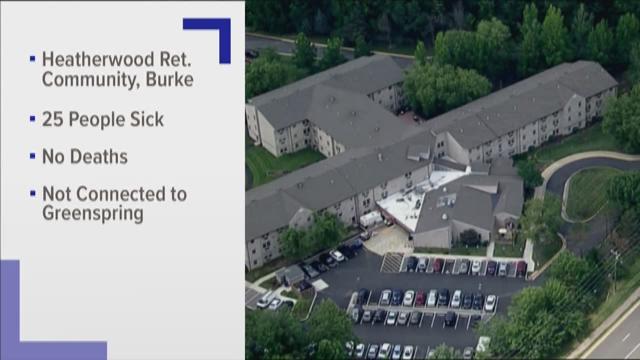 Three people are dead and 20 have been hospitalized following a respiratory outbreak at a Fairfax County assisted living facility.

The Fairfax County Health Department is conducting an outbreak investigation at the Greenspring Retirement Community in Springfield, Va.

The third death was confirmed on Wednesday.

A total of 63 people out of 263 residents became ill over the last 11 days with respiratory systems ranging from cough to pneumonia, health department officials said.

Health department officials said the infection is contained entirely to the assisted living facility and has not spread to any other buildings on the 58-acre campus.

Dr. Schwartz said the two patients who died were admitted to the hospital with pneumonia, but it was difficult to label that infection as the cause of their deaths, as they both had complex medical histories.

RELATED: To vaccinate or not? DC bill would allow minors to choose for themselves

The health department said a cause hasn't been identified, and the illnesses continue to happen, but there haven't been any new hospitalizations in recent days.

The Fairfax Health Department said they have been in touch with the Centers for Disease Control about the investigation and will be sending them samples.

Respiratory outbreaks at facilities for vulnerable or the older adult populations aren't uncommon, officials said. The department said they typically see about 12 per year.

The department also said this particular outbreak differs in that it's occurring in July, while most outbreaks similar to this occur in the winter, or flu season.

Schwartz told WUSA 9 that Greenspring has reported several outbreaks in the last decade, including common infections, like the norovirus and influenza. However, he said those are common and Greenspring is typically a good reporter of outbreaks.

"There has been excellent collaboration between Greenspring and the health department, and appropriate measures have been taken to reduce the risk of infection and keep residents safe, including closing the facility to new admissions, cancelling group activities, keeping ill residents in their rooms, and increasing cleaning," the Fairfax County Health Department said.

Schwartz said a lab at the Virginia State Health Department in Richmond and one at INOVA Health System are testing samples to see if they can determine the exact cause of the outbreak. So far, he said all tests have come back negative.