Gov. Ralph Northam was in attendance at Saturday's funeral for state trooper Lucas B. Dowell who was killed in a shootout. 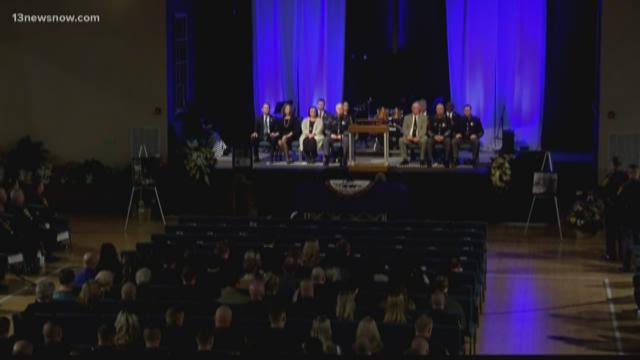 CHILHOWIE, Va. — Virginia's governor has made his first official public appearance since he denied appearing in a racist yearbook photo and admitted to wearing blackface.

Gov. Ralph Northam was in attendance at Saturday's funeral for state trooper Lucas B. Dowell who was killed in a shootout. Northam was not listed as a speaker in the funeral program.

The service in the town of Chilhowie for Dowell was four hours west of the political tumult in Richmond.

Northam has ignored calls to resign for the past week after a racist photo surfaced from his medical school yearbook. He also admitted to wearing blackface as part of a Michael Jackson costume.

Meanwhile, Lt. Gov. Justin Fairfax is facing calls to resign after two women accused him of sexual assault. He has vehemently denied the allegations.