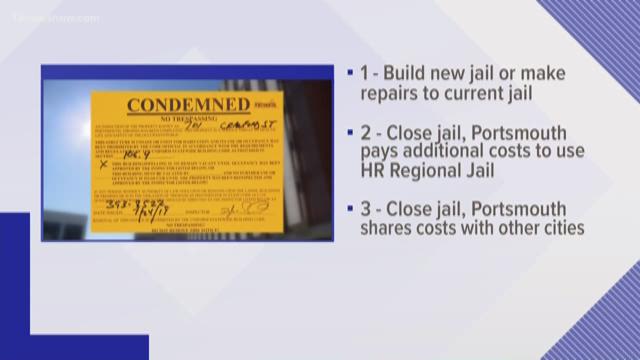 PORTSMOUTH, Va. — Following a judge's decision that matters regarding Portsmouth City Jail rest in the hands of the city, city council members will figure out what's next for the facility.

The jail was officially condemned last year in July 2019 along with a good portion of its Civic Center complex.

However, no inmates were removed due to Sheriff Moore's injunction that a judge approved to keep the jail open until officials can determine the next steps for repairs.

It's been months after that order was made and officials have yet to make a clear plan for what action to take with the jail. That's what Portsmouth City Council discussed Tuesday evening.

They considered three scenarios. The first includes building a new jail or making repairs to the current facility, while the other two options call for the jail to close and inmates to be taken to the Hampton Roads Regional Jail.

Rebuilding the jail would cost about $47 million.

Council members and Sheriff Moore also need to resolve the issue of why inmates from the Portsmouth jail can't be sent to HRRJ pending repairs.

Moore cites ethical and medical reasons as to why more inmates can't be accepted at the HRRJ as well as the Justice Department's recent report of inmate deaths.

RELATED: Behind the Bars: Inside Hampton Roads Regional Jail

Sheriff Moore sued the city right after the condemnation noting there was no warning before the official notice was handed down and claimed it's the city's job to maintain the jail building.

The city fought back by filing a court order in December 2019 to have prisoners at the jail be sent to the HRRJ. They claimed that Moore wasn't fulfilling his duties by filling beds at the HRRJ that the city pays for.