The comments came one day after the House Armed Services Committee questioned the idea. 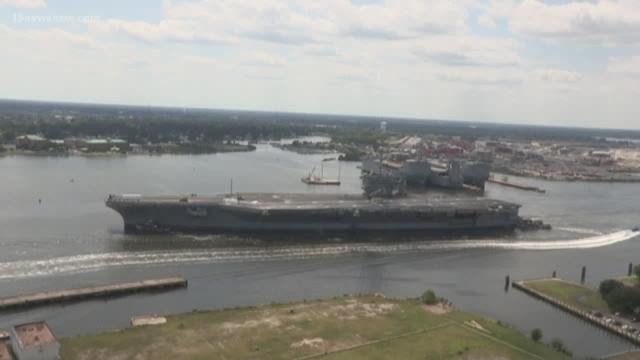 VIRGINIA BEACH, Va. — Congresswoman Elaine Luria (VA-02) said Navy plans to not refuel the USS Harry S. Truman and allow the aircraft carrier to be decommissioned a quarter of a century early are "dead in the water."

"I think it's preposterous," Luria said of the idea. The House Armed Services Committee member and 20-year Navy veteran added, "We invest in an aircraft carrier. If you take the cost to build an aircraft carrier, you amortize that over 25 years instead of 50 years, we obviously haven't gotten good value for our dollars for the taxpayers. We need to use the ships that we have fully. And we need to figure out how to maintain them and modernize them. Because the cheapest ship you have is the ship you already have."

That echoed earlier comments from the chairman of the House's Seapower and Projection Forces Subcommittee Joe Courtney, who said there was "zero" chance that his panel would authorize the Truman retirement plan.

Keeping the Truman would be very good news for Newport News Shipbuilding and its many local sub-contractors, who would benefit greatly from the 48-month, $4 billion overhaul and nuclear refueling contract.

"That would entail some 3,800 employees, highly skilled employees, and, not to mention somewhere in the neighborhood of 200 to 400 suppliers across 20 states," said Tidewater Community College Business Professor Peter Shaw. "This is a huge project."

Shaw agreed with Luria that getting rid of the Truman so early makes no business sense.

"In the case of the aircraft carrier, the idea of cutting its life span in half, you have basically thrown away a big chunk of your investment," he said.

The nation will begin to get a clearer picture on how all this plays out on June 4, when the House Armed Services Committee begins "mark-ups" on the Fiscal Year  2020 National Defense Authorization Act.