Credit: Abedin TaherkenareheH/EPA-EFE
Iranian soldiers march during the annual military parade marking the Iraqi invasion in 1980, which led to an eight-year-long war (1980-1988), in Tehran, Iran, 22 September 2018. On the same day, gunmen have reportedly opened fire killing at least 24 people, including civilians, and injuring dozens during an Iranian military parade in the south-western city of Ahvaz, media reported.
Author: Doug Stanglin (USA TODAY)
Published: 9/22/2018 7:19:27 AM

Credit: Alireza MOHAMMADI / ISNA/AFP/Getty Images
This picture taken on September 22, 2018 in the southwestern Iranian city of Ahvaz shows injured soldiers lying on the ground at the scene of an attack on a military parade that was marking the anniversary of the outbreak of its devastating 1980-1988 war with Saddam Hussein's Iraq.

Gunmen opened fire on an annual Iranian military parade Saturday in the southwest city of Ahvaz, killing at least 25 people and wounding 53 others, local media reported.

Four gunmen began shooting at people from behind the viewing stand, according to ISNA, the semi-official Iranian Students News Agency. The semi-official Fars news agency, which is close to the Islamic Revolutionary Guard, reported, however, that two gunmen on a motorcycle wearing khaki uniforms carried out the attack.

According to the deputy of governor of Khuzestan Province, Ali Hossein Hosseinzadeh, 25 people were killed and more than 60 others injured in the attack.

Khuzestan Gov. Gholamreza Shariati that two gunmen were killed and another two were arrested, according to the official Islamic Republic News Agency (IRNA).

Iran’s Foreign Minister Mohammad Javad Zarif  blamed the attack on regional countries and their “U.S. masters,” further raising regional tensions as Tehran’s nuclear deal with world powers is in jeopardy after President Donald Trump withdrew America from the accord.

He later said Iran had summoned diplomats from Britain, Denmark and the Netherlands over allegedly harboring "members of the terrorist group" that launched the attack. A statement early Sunday from Iran's Foreign Ministry also quoted ministry spokesman Bahram Qasemi as saying Danish and Dutch diplomats were told Iran "already warned" their governments about this. The statement also criticized Britain over a Saudi-linked, Farsi-language satellite channel immediately airing an interview with an Ahvazi separatist claiming the attack, the Associated Press reported.

Iran's supreme leader, Ayatollah Ali Khamenei, said the terrorists’ “crime is a continuation of the conspiracies by the US-backed regimes in the region which have aimed at creating insecurity in our dear country.”

“The tragic and heartrending incident of the martyrdom of a group of our dear people in Ahvaz at the hands of the mercenary terrorists has once again exposed the atrocity and viciousness of the enemies of the Iranian nation,” according to the statement.

In a separate statement, Iranian president Hassan Rouhani ordered the Ministry of Intelligence to investigate the attack by mobilizing “all facilities of the security and military forces to quickly identify the terrorists and their links, and resolutely deal with the crime,” IRNA reported.

A spokesman for an Arab separatist group in Iran said members of his organization carried out the attack, The AP reports.

Yacoub Hor al-Tostari, a spokesman for the Arab Struggle Movement for the Liberation of Ahvaz, told the AP his group wants that area of southwest Iran to be its own nation.

He described his group as leading an umbrella organization for other Ahvaz groups, which includes the militants who carried out Saturday’s attack. Al-Tostari said the assault undermined the Iranian government “on the day it wants to give a message to the world that it is powerful and in control.”

Arab separatist groups in the region have attacked oil pipelines there in the past and Iran. The separatists also accuse Iran’s Shiite theocracy of discriminating against its Sunni Arab citizens. Iran has blamed its Mideast archrival, the Sunni kingdom of Saudi Arabia, for funding their activity.

Islamic Revolutionary Guards spokesman Ramezan Sharif had earlier blamed the attack on an Arab separatist group supported by Saudi Arabia, according to Press TV, which is affiliated with state-owned Islamic Republic of Iran Broadcasting.

Images on state television showed journalists and onlookers turning to look toward the first shots, then the rows of marchers broke as soldiers and civilians sought cover under sustained gunfire.

“Oh God! Go go go! Lie down! Lie down!” one man screamed as a woman fled with her baby.

Paramedics rushed to tend to the wounded as soldiers, some bloodied in their dress uniforms, helped their comrades to ambulances.

“We suddenly realized that some armed people wearing fake military outfits started attacking the comrades from behind (the stage) and then opened fire on women and children,” an unnamed wounded soldier told state TV. “They were just aimlessly shooting around and did not have a specific target.”

No officials at the parade were injured "due to the fast reaction of the security forces,' Governor of Khuzestan Gholam-Reza Shariati told the Islamic Republic News Agency (IRNA).

The news agency reported that a number of civilians, including women and children, who were watching the military parade, were among those killed.

Credit: Behrad Ghasemi/ISNA/AP
In this photo provided by the Iranian Students' News Agency, ISNA, Iranian armed forces members and civilians take shelter in a shooting during a military parade marking the 38th anniversary of Iraq's 1980 invasion of Iran, in the southwestern city of Ahvaz, Iran, Saturday, Sept. 22, 2018.

Among various groups blamed for the attack, state television described the assailants as “takfiri gunmen,” a term previously used to describe the Islamic State group. Iran has been deeply involved in the fight against the Islamic State in Iraq and has aided embattled Syrian President Bashar Assad in his country’s long war.Iranian authorities pointed the finger a wide-range of groups as being behind the attack:

More: USA TODAY journalist gets rare glimpse of life in Iran, whose history with US is marked by decades of animosity

More: Talk of Iran's economic malaise and whispers of whom to blame

More: Iranians explain their 'misunderstood' country and why it's not North Korea

“Iran will respond swiftly and decisively in defense of Iranian lives,” he wrote on Twitter.

Terrorists recruited, trained, armed & paid by a foreign regime have attacked Ahvaz. Children and journos among casualties. Iran holds regional terror sponsors and their US masters accountable for such attacks. Iran will respond swiftly and decisively in defense of Iranian lives. pic.twitter.com/WG1J1wgVD9

State television aired footage of the aftermath of the assault on Ahvaz’s Quds, or Jerusalem, Boulevard, which like many other places around the country saw an annual parade marking the start of Iran’s long 1980s war with Iraq. The images included paramedics trying to help one person in military fatigues as other armed security personnel shouted at each other.

ISNA news agency published photographs of the attack’s aftermath, with bloodied troops in dress uniforms helping each other walk away.

A local news agency in Khuzestan province, of which Ahvaz is the capital, aired grainy mobile phone footage showing parade goers fleeing as soldiers lay flat on the ground. Gunfire rang out in the background.

“Security forces have restored security in the area but the parade has totally been disrupted,” a reporter on the scene for Iranian state television said by phone in a live broadcast, the Associated Press reported. “People have been killed but we have no figures yet.”

Zarif on Twitter said that the gunmen were “terrorists recruited, trained, armed & paid by a foreign regime.” He did not immediately elaborate. 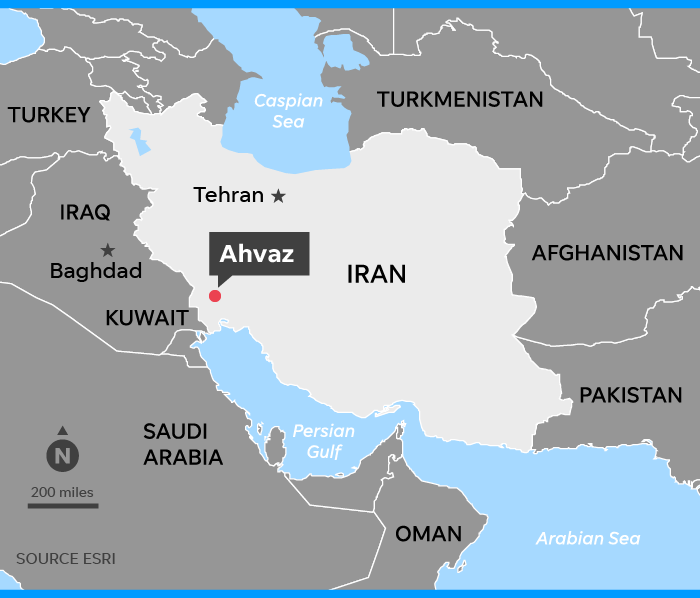 Saturday’s attack comes after a coordinated June 7, 2017, Islamic State group assault on parliament and the shrine of Ayatollah Ruhollah Khomeini in Tehran. At least 18 people were killed and more than 50 wounded.

Khomeini led the 1979 Islamic Revolution that toppled the Western-backed shah to become Iran’s first supreme leader until his death in 1989. The assault shocked Tehran, which largely has avoided militant attacks in the decades after the tumult surrounding the Islamic Revolution.