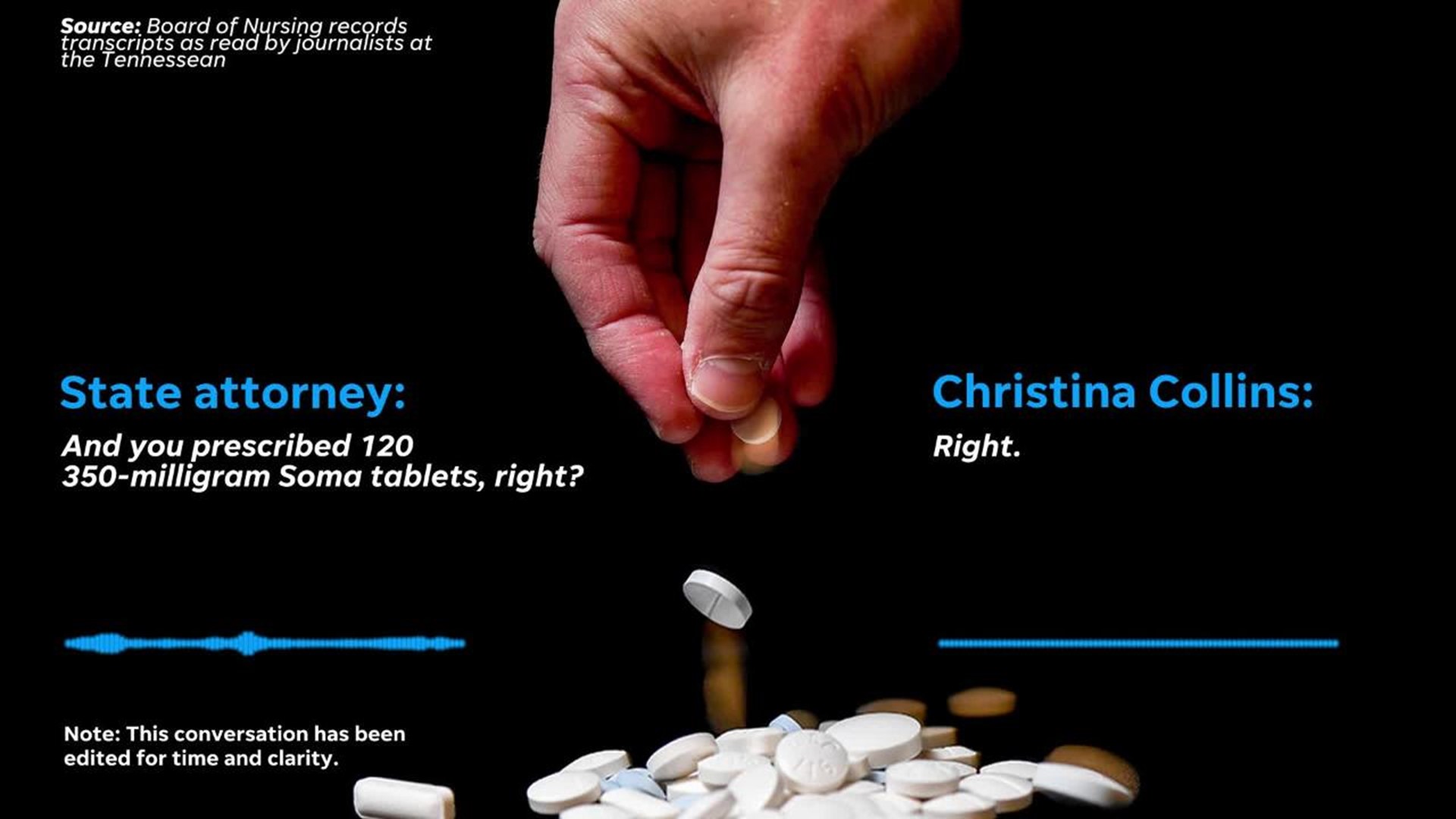 An east Tennessee nurse practitioner who once prescribed a patient 51 pills a day was allowed to keep her nursing license because of a fundamental error by members of a state nursing board, according to new arguments from state attorneys.

Christina Collins, 43, who was once the ninth highest opioid prescriber in Tennessee, admitted during a medical discipline trial earlier this year that she routinely prescribed massive opioid dosages to patients she never actually examined. The Tennessee Department of Health argued her prescriptions were “so colossal” their only reasonable use would be drug trafficking or suicide.

However, the Tennessee Board of Nursing allowed Collins to keep her to keep her nursing license. Collins was sentenced to two years of professional probation, but continues to work at small clinics and nursing homes in the Knoxville area.

State attorneys challenged that decision earlier this year, petitioning a county judge to order the nursing board to reconsider Collin's punishment. In new arguments filed in that case, the attorneys insist the decision should be thrown out because a single board member violated basic rules of evidence by doing her own online research, then used that research to misinform other board members about opioid prescriptions.

That board member was Lee Ann Stearns, who was one of three members who decided Collins' case. On the second day of deliberations, Stearns announced she spent the prior evening reading medical journal articles about opioids and had come to the conclusion that doctors and nurses receive little guidance on the proper procedures for large opioid prescriptions, according to a transcript of the hearing.

Stearns then read directly from a 2009 journal article by the American Pain Society – “theoretically opioids have no maximum or ceiling dose” – and said the article had changed her mind about Collin’s prescriptions.

“There is no doubt she overprescribed,” Stearnes said. “And that was my very first impression until I read this data."

State attorneys have clung to that specific statement, insisting that it shows how significant Stearns' online research was to the board's decision to let Collins keep her license.

Dec. 21: New York wants opioid makers to pay a surcharge. It may not be legal.

Dec. 20: Addiction killed each person on this map. You can add a story, too.

Sara Sedgwick, a senior assistant attorney general, wrote in court arguments that Stearns should never have conducted her own online research – similar to how a juror in a criminal trial is forbidden from conducting their own investigation – because attorneys did not have the opportunity to debate, challenge or debunk the journal article.

Sedgwick also notes that the journal article appears to have made Stearns more comfortable with Collin's prescribing methods even though the her prescriptions were more than 20 times larger than the examples cited in the journal article.

“Even if, as Ms. Stearns stated during the board panel deliberations, the literature she researched and relied on states there is ‘little evidence to guide safe and effective prescribing' at more than 200 morphine equivalents a day, it does not then follow that the same literature somehow would support a conclusion that prescribing 3,840 morphine equivalents per day is within the standard of care," Sedgwick wrote.

Stearns, who has since left the Board of Nursing, declined to comment.

Collins became one of Tennessee’s top opioid prescribers in 2011 and 2012 while working at Bearden Health Associates, a Knoxville-area pain clinic that was once known for whopping prescriptions. At least three other medical providers at Bearden have been disciplined for over prescription, including Dr. Frank McNiel, who ran the clinic for decades and was Collins’ supervisor.

Collins’ prescriptions were made public in an October investigation by The Tennessean, which reviewed more than 4,000 pages of state records and disciplinary documents. The investigation found that Collins had given huge opioid prescriptions to patients despite recent overdoses, drug trafficking convictions, and obvious signs of abuse or misuse.

Collins' attorney, Eric Vinsant, said in an interview earlier this year that his client as a well-intentioned nurse whom the state was attempting to punish under modern opioids standards even though her prescriptions are at least 6 years old. Collins has said she was only following the lead of her colleagues and refilling prescriptions that had been previously issued by McNiel.

“This case stretches from 2011 and 2012, which was a time before Tennessee really began looking at the prescribing of opioids and other controlled substances for pain,” Vinsant said. “There was really a very limited amount of guidance for practitioners on what was expected and what were best practices.”