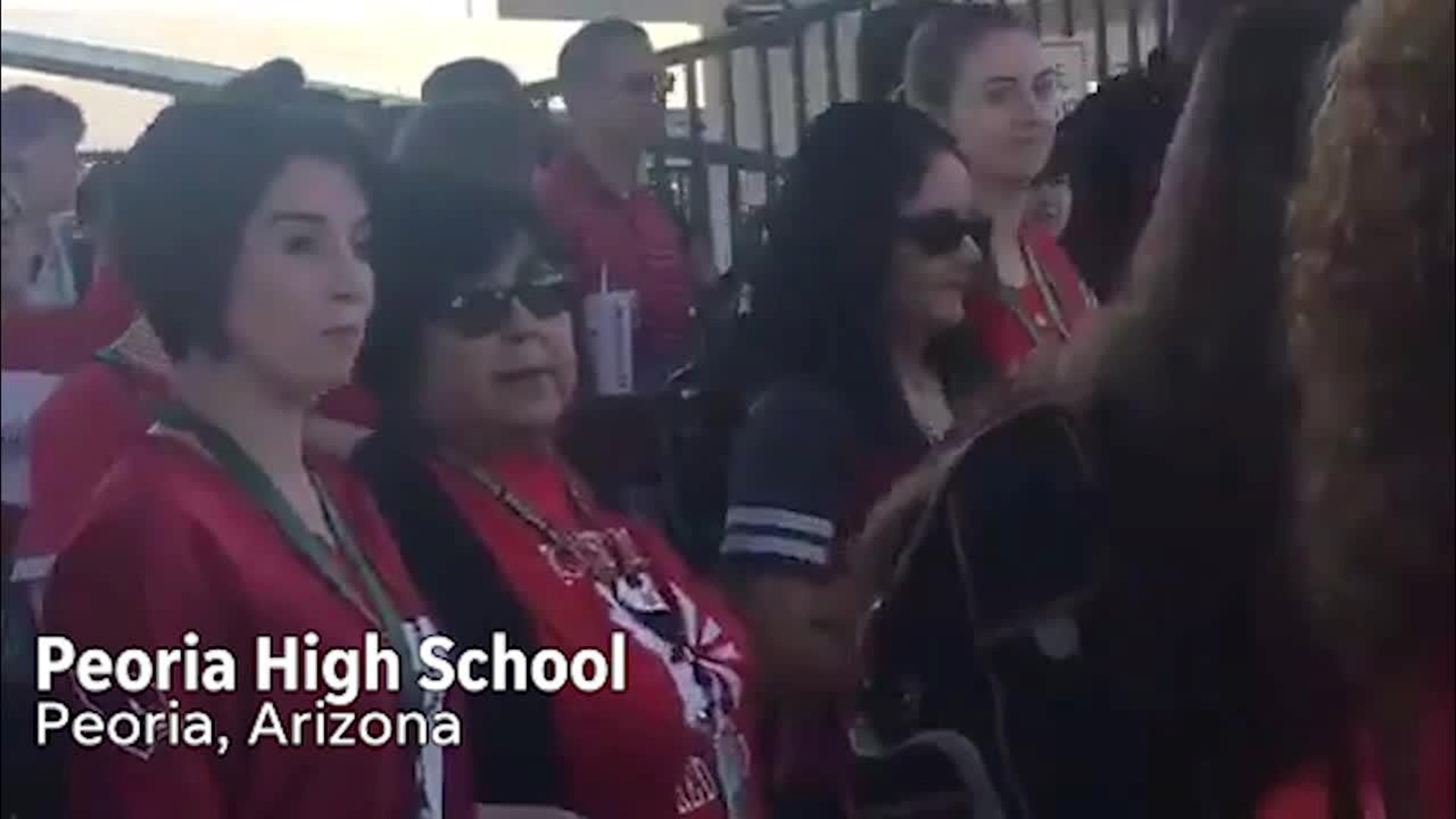 PHOENIX — Thousands of parents and students across Arizona joined teachers Wednesday for a "walk-in" to their schools rather than a walkout as a show of solidarity to boost education financing in the state.

Participants in the #RedForEd effort wore red and carried signs during the rallies scheduled before the first school bell. The walk-ins were planned so they would not disrupt class time.

“This is the most critical issue facing Arizona,” said Kathy Anderson of Scottsdale, who drove with husband Brian Spicker to be at an early morning protest at Madison Traditional Academy in Phoenix. Their granddaughter is a student at the public school.

Participating schools included district and charter, urban and rural, and those in neighborhoods that strongly lean both liberal and conservative.

By many measures, Arizona ranks near the bottom of pay nationally. One from Arizona State University's Morrison Institute for Public Policy that looks at teacher salaries nationwide and adjusts for regional costs of living shows that the state falls in rankings that are adjusted for cost of living because the other states with low salaries also have lower prices for goods and services.

► April 7: This Arizona teacher doubled his salary with a teaching job in California
► April 4: Teachers, Oklahoma lawmakers at odds as walkout rolls on

"No one's listening, and it's embarrassing that this state that has so many resources is so low on the rating for teachers," Anderson said.

The teacher-led, grassroots group Arizona Educators United organized the walk-ins and is asking Gov. Doug Ducey and the Legislature for five things:

• Restoration of the education budget to 2008 levels. This would require adding about $1 billion more in state money to education. The state spends $924 less per student in inflation-adjusted dollars now than it did in 2008, according to the Joint Legislative Budget Committee.

• A 20% teacher salary increase. The median teacher pay in 2018 in Arizona is $46,949, according to an Arizona School Boards Association analysis. That's almost $270 less than what's cited in as the 2016 average Arizona teacher's salary in the most recent National Education Association report. A 20% increase would raise the median salary to $56,339.

• A permanent salary structure that includes annual raises. Right now, individual school districts each have their own salary schedules with no statewide rates. Some froze pay increases across the board during the recession a decade ago and don't offer raises that keep up with inflation, which has been about 2% in the past year according to the federal Bureau of Labor Statistics.

Only Florida and D.C. are lower. Arizona's number is less than three-quarters of the national average.

Ducey frustrated educators with his comments Tuesday that he would be willing to meet with decision makers to help solve the education financing problem, but "what I don’t want to do is get into these political operatives’ political circus."

Wednesday's walk-in in Arizona coincides with widespread ongoing protests in Oklahoma, where teachers have publicly revolted over the low pay that ranks them among the worst compensated in the nation, and Kentucky, where lawmakers for years have not been allocating money to teachers' pensions and are now have less than a third of the resources needed to pay for retirees.

► April 4: Oklahoma teachers share photos of broken chairs, crumbling textbooks
► April 4: When teachers close the schools in protest, what happens to the kids?

Arizona Educators United, the grassroots group behind #RedForEd that planned the walk-ins, has announced it will stage a walkout, meaning teachers would leave school during work hours. They have not publicly announced a date.

If enough teachers walk out, it can force closure of schools and even entire districts, which happened in Kentucky last week.

In Oklahoma, where teachers walked out for the eighth consecutive school day Wednesday, districts announced weeks in advance that they would close all schools in support of teachers' actions and shared updates every day about the next day's closures.

Many school boards and superintendents there have given teachers permission to walk out, differentiating that action from a strike, which would happen if superintendents require teachers to return to work and they refuse.

Arizona, Oklahoma, Kentucky and West Virginia are all employment-at-will states that offer employees little to no job protections in the event of a strike. The risk of losing their jobs or part of their salaries if they take part in a walkout remains one of the biggest concerns for educators.

At Peoria High School about 15 miles northwest of Phoenix, a  school where 70% of students qualify for free and reduced lunch, a walkout has some teachers and parents concerned.

“Do I want to walk out? No,” said Shane Sullivan, a history teacher at Peoria High. “Will I walk out? Yes, as a last resort.”

Although a walkout would displace children, it would be worth it, said Amanda Clark, whose children attend Cheyenne Elementary in Peoria.

Many superintendents, who have been discussing the logistics of a walkout among themselves, have expressed a desire to continue to pay teachers when it happens, said Mark Joraanstad, Arizona School Administrators executive director. Few have publicly aired their opinions.

► March 30: Teachers are striking all over. What is going on?
► March 30: Kentucky teachers shut down schools in protest over pension bill

But some school boards, including those in Arizona's largest districts of Mesa and Tucson, have said they support the movement.

"We know that if this happens we’d have kids who are with us all day because we wouldn’t be able to get to their parents," said Kay Steward, principal at Cholla Elementary School in Casa Grande. "We’re not sending kids home unless we know that they’re safe. We have alternate plans."

In Oklahoma, fears of a child-care shortage or child-hunger crisis haven't materialized as dozens of organizations stepped up to provide free or lower-priced care and the state's largest school district provided free meals at more than 100 locations.

"Because the whole community, including CEOs, understood and believed in what was occurring, they were very forgiving of vacation time or allowing parents to bring their kids to work," said Douglas Kupper, director of the Oklahoma City Parks, Recreation & Cultural Services Department.

Many Arizona parents who supported the walk-ins said they are willing to find child care and help each other if teachers walk out.

"Me, my little kiddo and his friend will be right behind them with our little pickets, if they do (walk out), to support them," said Jackie Norris, who walked with her kindergartener grandson to Cholla Elementary. "Anything that they do, they’ve got my support."

And like Anderson in Scottsdale, she said she would be willing to offer child care.

"I can start a little daycare with all the parents who need help with kids," Norris said. "Bring them. I’ll do anything to help support these teachers."